There are a lot of forgettable fantasy movies out there. The reasons are many: the production values are low; the concept falls flat; it’s a Dungeons & Dragons rip-off; it’s the actual Dungeons & Dragons movie. The good news is that every once in a while, a forgettable movie gets into the hands of an actor who knows just how to liven up a dull take by chewing a little scenery. The results often overshadow the movies themselves; they make a bad movie watchable, or a good one sublime. Below, ten of the best ham jobs in fantasy cinema.


1. Tim Curry, Rocky Horror Picture Show
The man didn’t invent mugging for the camera, but he sure perfected it. He’s since made a career out of walking into a movie and immediately setting up camp, but his role as Dr. Frank N. Furter was his first, and it was obvious he had found what he was meant to do; there’s something magical about an actor so willing to gaze into the lens and let us in on the joke. Though many an amateur has tried, there’s no out-camping the original sweet transvestite.

This for-kids-only Disney creeper about three witchy sisters with more attitude than ability who menace a handful of moppets one Halloween night might have fallen into obscurity with Disney’s other B-roll offerings except that someone was smart enough to cast Bette Midler as the oldest sister. Her Winnie vamps her way through every frame, stopping only for musical numbers; the giddiness spills over into sidekicks Kathy Najimy and Sarah Jessica Parker, and cements this movie as a guilty pleasure.

Some roles are torture for a scenery-chewer, especially if the role is a stock villain and there’s not much for an actor to really sink his teeth into (sorry, sorry). However, for Jason Issacs, there are no small parts, only small sneers. He plays Lucius Malfoy as a straight-up sorcerer to terrify the kids, but manages to sneak in stiff-upper-lip snits in a hilarious caricature of the British gentry most often seen waltzing through Dickens novels smacking urchins about the face and head. It’s always nice when your villain is in on the joke.

4. Richard Roxburgh, Van Helsing
In a movie overflowing with wooden, confused, or flat-out absent performances from actors trying to play it straight, Richard Roxburgh took one look at the script, realized what he had signed on for, and said, “Well, since I’m here, I might as well be the most hilarious Dracula there ever was.” Never let it be said that the man couldn’t commit to a role.

This movie has all the problems you could anticipate from a live-action Disney princess movie that tries to spoof animated Disney princess movies. However, Adams and Marsden threw themselves into parts they seem born for, as the cartoon-to-life Princess Giselle and Prince Edward. They capture each precisely-twee mannerism of Disney royalty without a hint of irony, drifting through the film in a haze of near-manic glee.


6. Ralph Fiennes, Clash of the Titans

Just call it a hunch.

This SciFi miniseries was better than most of the channel’s offerings; it starred Alice “Borg Queen” Krige and brought future superstar James McAvoy to American audiences. Unfortunately, they overestimated their need for star power and cast Susan Sarandon as Princess Wencisia Corrino, the younger (?) sister of 30-year-old Julie Cox. Sarandon did her best Tim Curry impression, but it wasn’t broad enough to be fun, and in the end she was overshadowed by her own hats. 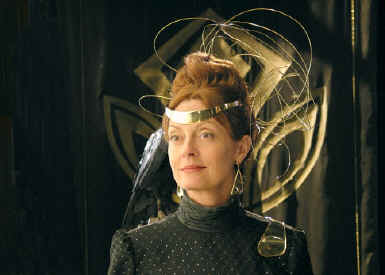 OF ALL THE MOVIES THAT AL PACINO YELLED HIS WAY THROUGH, THIS IS THE ONE WHERE IT MADE THE MOST SENSE. BECAUSE HE WAS THE DEVIL, AND HELL IS PROBABLY LOUD.

Here’s what it boils down to: Hugo Weaving never met a scene he couldn’t steal. Whether he’s turning “Anderson” into a sixteen-syllable word in the Matrix trilogy, raising his eyebrows into his hairline during the Rivendell Council in the Lord of the Rings movies, or making V one of the funniest anarchists ever, Weaving knows how to make his mark. His attempts to appear in every genre franchise will continue (Transformers, Wolfman), and five bucks says he gets into the next X-movie. (As Scott Summers. What? You can’t stop him. He’s Hugo Weaving.)

Whether or not you consider Robin Hood a fantasy, there’s no denying that in Prince of Thieves, Alan Rickman turned in one of cinema’s campest villains of all time. Rumor has it that Rickman agreed to do the movie only if he was allowed to interpret the character as he chose without directorial notes. If true, it was a genius move: his Sheriff of Nottingham was so over-the-top and out of place in the gritty, “realistic” retelling of the legend that he felt like a transplant from another, more awesome movie.

Genevieve Valentine’s fiction has appeared in Clarkesworld, Strange Horizons, Fantasy, Federations, and more. She is a columnist at Tor.com and Fantasy Magazine. Her first novel, Mechanique: A Tale of the Circus Tresaulti, is forthcoming in 2011. Her appetite for bad movies is insatiable, a tragedy she tracks on her blog.

ALSO IN THIS ISSUE

The following content is exclusive to the paid edition of People of Colo(u)r Destroy Fantasy!, which is available for just $2.99 (ebook) or $12.99 (trade paperback).

Original Fiction by Thoraiya Dyer ("The Rock in the Water") and N.K. Jemisin ("Red Dirt Witch"), plus reprints by Sofia Samatar ("Walkdog") and Celeste Rita Baker ("Name Calling"). Also, we have additional nonfiction features by Karen Lord ("Saving Fantasy"), John Chu ("We Are More Than Our Skin"), Brandon O’Brien ("You Forgot to Invite the Soucouyant"), and Chinelo Onwualu ("Crying Wolf: Predators in the Genre Community").