Give Us Back Our Fucking Gods

Creation myths are the stuff of old, intuitive science. They are the stories that attempt to explain the source of the universe and the very beginnings of life. Creation myths are not synonymous with folktales, animal stories, or playful allegories that instill morals and values. They are, ultimately, our embellished truths—complete with fucking gods, incest, unrequited love, lust, vengeance, and war. These are the fundamental values that birthed humanity, civilizations, and empires. And as a native Haitian, a descendant of Africans who have experienced the transatlantic slave trade and the Middle Passage, as well as a great-granddaughter of those who’ve fought in the Haitian revolution, I know this much is true: we’ve been stripped of our fucking gods.

In Haitian Vodou mythology, a serpent fucked a rainbow, and thus, the sky and sea, the sun and earth, the Haitian people, and all of humanity were created (in that order). Yes, it’s hard to imagine a serpent and a rainbow getting it on. Much like it is hard to visualize one’s actual parents, maybe. I suppose this sort of mental quantum leap backwards to the big bang that gave way to our existence creates either psychological trauma or ecstatic revelation, depending on the circumstances of our conception, be it out of love or hate. This inceptive love or hate determines our birth, our life, our worldview and cosmology, and ultimately our cultural death.

The primordial white serpent Dambalah is the sky god for the Dahomey people of Guinea and Benin. He is the beginning of all life, and thus, with his seven-thousand coils, is essentially the twists and turns of DNA strands. Through Dambalah, we know that life begins with the spiral. Science confirms the same—our genetic coding is embedded within spiraling DNA strands. Within the seven-thousand coils of Dambalah are our cultural and ancestral memory—the psyche of our collective history. We revere the flexibility of the serpent, how it can wrap itself around any and everything taking the shape of the great Maker. Flexibility and ease of movement are life itself in Haitian Vodou.

Yet, in other parts of our world, serpents are deemed evil. This connotation of a snake as sinister and conniving dates back to Norse myths, where it was guardian of the underworld symbolizing death and chaos. This is also the case in Judeo-Christian mythology, where the serpent was responsible for “the fall of Man.”

During colonialism, when enslaved Africans were brought to the new world by the Portuguese, British, French, and Spanish, they were forced to denounce their traditions and do away with their fucking gods—the same gods that birthed them and guided them through life’s twists and turns. For Africans who arrived in Saint-Domingue, what is now Haiti and the Dominican Republic, the old African gods simply merged with the new saints. They didn’t quite fuck. There was no love, no hate even. It was simply a recognition and a gentle nod to universal truths. So in order to appease the white slave masters in the new world, Africans in Saint-Domingue hid their gods behind European saints. Thus, Dambalah wore the mask of Saint Patrick, who had banished the snakes out of Ireland, symbolically doing away with paganism and evil. The serpent god Dambalah became associated with the nation without serpents. The rainbow serpent Ayida-Wedo became the Immaculate Conception. No symbolic snakes had entered her womb and penetrated the holy egg that was to become the lord and savior. We Africans were clever in this way, pretending to condemn our traditions by discreetly worshipping their veiled counterparts. If we had a god of love and fertility, surely there was a patron saint for those same values, however warped and twisted. Though in this process of masking our truths, we chipped away at our gods, stripped them of their power in our lives. While they were still the fucking gods who birthed us, we worshipped them from a distance as if we’d been adopted by new mothers and fathers. Our memory of them faded and blurred. Or we outright turned our backs on them to embrace monotheism. Otherwise, we were pagans and heathens, like Saint Patrick’s snakes in Ireland, in the eyes of our masters.

Fantasy in literature is the stuff of old and new gods. We pull from our collective memory of fucking gods to create worlds where magic, monsters, and mayhem live. The Egyptian, Norse, Celtic, Roman, and Greek pantheon served as foundation for many of Western Literature’s epic masterpieces. From Homer to Tolkien and Neil Gaiman to George R. R. Martin, white men and their fucking gods have been at the forefront of fantasy literature. They place themselves at the center of their own stories, and thus, create new mythologies where they are made both hero and god. They create and birth themselves over and over, immortalizing their story and truths within the pages of volumes and tomes. This sort of perpetual homage and constant reverence is ritual drama and ceremony, in the same way that African traditions require libations and songs and prayers to uphold the memory of our fucking gods. This is how culture is preserved. This is how we continually breathe life into the very thing that birthed us, so that we can continue to live.

However, as for people of color all over the globe who’ve been stripped of their fucking gods through colonization, how can we begin to revere our cosmic mothers and fathers in the form of fantasy literature? How can we uphold our respective mythologies and preserve them within published pages so that we can immortalize our truths for all of eternity? Especially when others, who still have access to their own fucking gods, dig away at ours after we’ve been collectively told they were evil and perverse.

This brings to mind the story of Yurugu in Dogon mythology. The Dogon of Mali are some of the most scientifically advanced indigenous people ever to be observed by cultural anthropologists. Their understanding of the cosmos and the universe even without the contraptions of technology far surpasses Western science. They have a god of chaos and evil, of course. Amma, the sky goddess, nested her twin children in the great cosmic egg, one of whom was Yurugu. In an act of rebellion, Yurugu prematurely abandoned this egg, the very thing that was supposed to nurture him into birth, and descended into earth. Realizing that he was alone in the universe and without a female counterpart, he returned to the cosmic egg in search of his twin, Yasigi. Amma had placed her under the care of the protective twins called Nommo. Upon encountering his mother, Amma, he procreated with her instead. This vile and incestuous act against the cosmic mother brought about a great disaster in the universe of the Dogon. It is the single source of evil and destruction.

All indigenous mythologies in our world have a god of chaos. Everything was once birthed. Gods fucked, and then good, evil, love, or hate was born. Fantasy literature allows us to pull from this idea, and this is where we can begin to tell our truths if we peel away at what was force-fed to us about other gods whose stories have no place or value in our history—white men with their swords and proclamations of godlike power over the universe. What if in our fantasy literature we take back our fucking gods and dismiss the names of the fathers of evil and chaos? It would be like denouncing our foster and adoptive parents in search of our birth mothers and fathers. If our collective lives have been reduced to existing within margins—poverty, oppression, violence, and disenfranchisement—then we have to look back to those forces that cultivated this reality. Were these circumstances the product of our birth or our upbringing? Do we blame our cosmic parents? Were they fucking out of hate or love? Was it incest or rape? Because if nothing but chaos exists around us, then this cosmic fucking must have been an act of violence if we were to follow the patterns in world mythology. If we don’t take back our loving, nurturing gods—the wise and life-affirming serpent and his rainbow wife, for example—then we will collectively live the realities of the energies that we believe to have created us.

In order to write fantasy stories that are epic and dig deep into our mythological truths and history, we have to know the names and faces of our fucking gods, or at the very least, have a seed of a memory of them to know that we were not born out of chaos, that we are not the purveyors of evil across the globe. N.K. Jemisin has done this by subverting European tropes in fantasy literature to cast a light on the overarching themes of oppression and power in our world. Nnedi Okorafor has highlighted the breadth and depth of both godlike magic and human reality in African cosmology and merged it with Western technology to tell a profound truth about our existence: we have our own magic, and we have our own fucking gods.

The dearth of people of color writing fantasy literature is directly related to our collective proximity to what was stolen from us; pried out of our hands, hearts, and minds; or stomped out and beat out of us—our gods. Our beloved fucking gods. 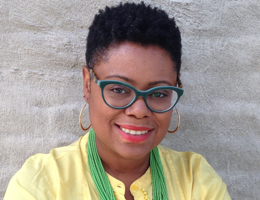 Ibi Zoboi was born in Port-au-Prince, Haiti and immigrated to the U.S. when she was four years old. She holds an MFA in Writing for Children & Young Adults from Vermont College of Fine Arts, where she was a recipient of the Norma Fox Mazer Award. Her award-winning and Pushcart-nominated writing has been published in Haiti Noir, The Caribbean Writer, The New York Times Book Review, The Horn Book Magazine, and The Rumpus, among others. Her debut YA novel American Street (Balzer+Bray/HarperCollins) is due out in Winter 2017. Her debut Middle Grade novel, My Life as an Ice Cream Sandwich (Dutton/Penguin), is forthcoming.