Award-winning illustrator J.P. Targete‘s work spans over 300 book covers and a multitude of game characters and environments. He broke into cover illustration at Avon Books and, since then, has worked with Wizards of the Coast, The Science Fiction Book Club, Relativity Media, Marvel and Disney/Pixar, among others. As a result, his extensive gallery includes sweeping visions of epic battles, detailed illustrations of human and mythic characters and panoramic views of fantastic landscapes like this issue’s cover “The Nightmare Academy.” 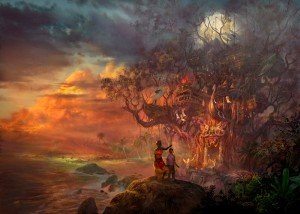 Yes, I had the luxury of living near Dean at the time and was able to talk to him about his vision of the Academy itself. He always wanted it to be a bunch of ships from different eras that were mixed in with a giant Banyan tree. I ran with this idea and created a sketch for him. Once he approved it I then set out to create the image. I gathered lots of references from images of ships I found on the web. Once I had all my materials I started out with a rough drawing and slowly built up the image in color layers in photoshop. Each layer would have an increased level of detail. I wanted the scene to take place at the “Golden hour” so we had all this orange and yellow sunlight beaming on the tree and in the sky. There are lots of details in this piece, like small birds flying by, small statues and decor at the entrance etc. This was a very fun piece to work on.

Your gallery includes illustrations, character and creature artwork, drawings and sketches, environments and props, comics and 3D work. Why did you choose a landscape instead of a character portrait for “The Nightmare Academy”?

Dean Lorey the author wanted a landscape/environment of the Nightmare Academy itself. He wanted to have an epic image that could represent the feel, the fun and the world he had created. Personally I feel environments can sometimes give you more insight into a story then a portrait especially if the environment is closely connected to that story.

How much did you draw directly from the book and how much was your own vision?

The idea came from Dean Lorey and the book, but the design itself and all the details came from me. It’s always a collaborative effort with commissions. The initial idea is very important even if the design and details are not described or given. Ideas are the heart of any final illustration.

You’ve also created cover art for numerous books. How did you get into illustrating covers?

I started illustrating book covers while still in college at The School of Visual Arts. I had a teacher who was an illustrator at the time, and he put in a good word for me with a publisher. It wasn’t long before I was doing book covers regularly and built up a clientele. It was one of my goals to be a book cover illustrator.

Your gallery is full of fantasy scenes, but you’ve also worked on romance covers. What other genres would you like to try your hand at?

I think I’m most comfortable in the fantasy and sci-fi genres, though historical subjects intrigue me as well. I think I will be doing more fantasy, sci-fi and horror going forward but also perhaps children’s books as well.

In addition to your artwork, you have several instructional DVDS. What advice would you give aspiring fantasy artists?

My advice would be to follow your heart do what you want to do. At first you may not be so good at it, but, if it’s something you’re passionate about and you keep doing it, you will eventually become good at it. Making a career out of it is very possible as there are so many opportunities for artists in the video game and publishing fields.

You’ve generously shared nine pieces of your art with us. Could you tell us why you chose those pieces?

These pieces represent the body of work I’ve done over the years. It also embodies my traditional and digital artwork. I’ve always tried to keep three things constant in my work, dynamics, composition and detail. Those are the main qualities I keep balanced within my work. These pieces also represent the transition of the type of work I’ve done from illustration to concept art.

Good question, a great many things I hope. One of the things I am interested in is self publishing, writing, and illustrating my own stories and creating my own art books as I have a lot to share. My first self published creation is titled “Once upon a time in my mind.” It’s a collection of sketches, drawings and illustrations I’ve done throughout my career but also thoughts/insights into the work written by me. With self publishing being a reality the possibilities are endless. Here is a link where readers can see a preview and find out more about my new art book.