Jennifer Mei’s work displays a sense of both grace and whimsy. She paints and draws characters inspired by and drawn from a number of video games, as well as naturalistic pieces with a loose feel. Her subjects range from fantasy stalwarts like dragons and warriors to apple-shaped buildings and flying whales. Her cover piece for this issue riffs on Jacques-Louis David’s famous Napoleon Crossing the Alps, putting a decidedly steampunk twist on the great Frenchman and his mount. 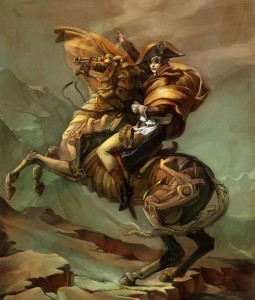 Can you describe your process for painting “Steampunk Bonaparte?”

I started out by brainstorming some possibilities of what Napoleon might look like in a steampunk era and sketching them out on paper as quickly as I could. Then I just built it up from there. The most challenging part was the first step of designing what the horse would look like, and how different I could make the work from the original without the viewer having trouble getting the reference. The rest just took a lot of patience.

Napoleon Bonaparte lived several decades before the historical era that has grabbed the greatest amount of attention from steampunk artists, makers, and writers. What drew you to this period, and to Jacques-Louis David’s painting in particular?

David has always been one of my favorite artists and his painting of Napoleon has captured my interest for years. So, when I was given a final project assignment in art history to reinterpret an old artwork in the textbook, I jumped on the opportunity to paint a different version of David’s masterpiece. During the beginning of the Napoleonic Wars, ships were steam powered, so apparently people in the early 1800s knew about its potential. I definitely thought it would be ironic to see Napoleon on a steam-powered horse, especially when Britain’s steamships were giving him so much trouble.

If you could have the time and the resources to complete any artistic project you would like, what would you choose?

I’m not quite sure about what I would choose, actually. My inspiration tends to jump around from place to place, which unfortunately leaves a lot of things undone. If I could, I would choose simply everything, although I’m sure I’m just being greedy here.

What projects are you working on right now?

At the moment, I’m going over some of my old paintings to improve them and to look at my progress. Revisiting old works is one of my favorite things to do. It’s always fun to realize that you can paint something that you weren’t able to paint before!

You’ve done many drawings and paintings inspired by or connected to video games. Aside from the subject matter, how has gaming influenced your art?

Games have inspired me to go on my current path. I will admit that I am a fool for pretty graphics and special effects. In fact, the first thing I do when I decide to play a game is look at the concept art. When playing a game, it’s easy to feel like you’re in a different world. That is why I believe a well-designed game itself can be a work of art, and playing a game it is like viewing an artwork for hours straight.

Apples show up in many of your works. What draws you to them? The “forbidden fruit” concept? The high fiber content Inquiring minds want to know.

The “apple” was actually the theme that my high school portfolio revolved around. Eventually, the theme kind of stuck, and I found myself rather connected to it. When I first began to formally study art, the first thing I drew was an apple. Then, I drew another apple and another. My teacher believed in having a solid foundation and that drawing from life was the first step for any artist. And so, as a child, I learned how to draw the same way as I learned my alphabet—starting from “A”, which stands for “apple”. To me, the apple is the beginning of all things that need to be built over time, as well as a delicious snack.

What is the average workday like for Jennifer Mei?

I actually don’t have an average workday yet. At the moment I’ve just started my second year of college, and everything there is far from consistent! One day you’ll have nothing to do, and the next, you have half a million assignments due the next week, with barely any time to sleep or eat. Then, just when you’re not sure if you’ll make it past finals week, everything suddenly lifts off your shoulders and you have two months of break, so you can hibernate in preparation for next quarter.

Which artists or works of art have had the greatest influence on you?

Many of my favorite works are actually historical paintings. A majority of them from the Romantic era. As for more modern-day works of art, I’ve been influenced greatly by concept art for a multitude of movies and games. I know it’s a strange combination, but it can work!

What about steampunk inspires you, and what do you think about its popularity right now?

Steampunk is challenging because it’s like designing a machine. The placement of everything has to at least vaguely make sense, and even when you’ve designed it once, it can always still be improved upon. I find the concept extremely romantic as well, because it transports me back to an era where the human imagination is just beginning to take flight. I believe many other people think the same way, and this is what makes it so popular.

What keeps you coming back to fantastic art, both looking at it and making it?

Fantastic art isn’t hard to find at all these days, and that’s what I love the most about it. Sometimes, when life gets tough, I just like to take a little break and imagine a different world somewhere far, far away.