Nicole Cardiff is a Los Angeles-based fantasy artist and illustrator who has worked with Harcourt, Sony, White Wolf, and Wizards of the Coast, among other clients. Nicole uses traditional and electronic tools, but she paints primarily at the computer, and she’s part of the new generation of illustrators who are pushing digital art software to the limits to create vivid images that tell nuanced, engaging stories. She has a gift for bringing characters to life, both as people and as archetypes, and to look at them is to imagine yourself within the worlds she creates. 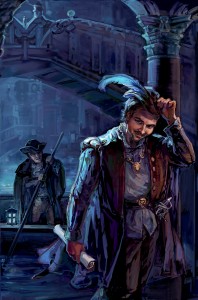 What was the inspiration for Gentleman Thief?

I’d read Scott Lynch’s The Lies of Locke Lamora and really loved it, so I wanted to paint something with similar themes—Venetian night, thieves, that kind of thing.

What are some of your favorite tools or techniques?

I usually work with a combination of traditional sketching, Photoshop, and PainterI typically sketch out a number of thumbnails with regular pencil and paper, scan in the best of them and do quick digital color sketches over the top, and then shoot/collect the reference that I need to complete the piece.

Card art definitely taught me to be more efficient with what I was painting—dramatic lighting, for example, goes a lot further than loads of fussy detail when the end product is going to print maybe 1.5 inches across, and icons for casual games are even more space-limited. For tabletop work, I like to give adventurers somewhat battered or nicked armor if I can, and generally age their world, as I think it’s more interesting to see a character that looks like they have a bit of a history. I’ve also noticed that if I’m playing a video game I really love, my design decisions tend to start skewing in that direction; Portal 2 got me to desaturate/go monochrome more than my usual, for example.

As to the artists, Jean-Leon Gerome, N. C. Wyeth, Greg Manchess, and Jaime Jones; for the writers, C. S. Friedman, Frank Herbert, GRRM. I actually just finished a Tolkien-based piece for the “Eowyn and the Nazgul” challenge over at Jon Schindehette’s blog.

What are your favorite kinds of characters or creatures to paint?

What are your first steps in illustrating a fantastic scene?

I do a lot of very rough, compositional scribbles in my sketchbook, trying to feel out what the optimal composition for the scene might be. Depending on what’s in it, I might start looking for reference images, if I’m not particularly familiar with the subject matter or if it’s a very specific intellectual property. If I’m working for a client, I clean up three or four of my favorites into rough sketches for them to choose between, and get feedback from them. If it’s a personal piece, I’ll usually just do color studies of my favorites and then choose the one I think is the most successful.

Can you describe your workday?

Usually I’m more or less at the computer painting from 9-6. I try to have multiple projects going at once, so that I can stay fresh and switch off if I start to get bogged down, or if I’m waiting on client feedback. The overwhelming majority of my clients are located outside of LA, so I email or phone them to get their input. I typically also spend a little time checking freelance boards or emailing existing contacts to drum up more work once my current contracts are completed, which I do while waiting to hear back from the current clients. Then I kick into the painting portion of my day, switching between Photoshop and Painter throughout, and working on a Wacom Graphire (which dates from back before my high school degree, and it’s still trucking!). I have a dual-monitor setup, and I usually have a podcast playing or my reference on the secondary screen. I also end up doing a reference shoot at least once a week, which typically involves myself or the husband looking silly in front of my photo light, often with one of the prop weapons I have around. If I have a lot of fabric in the scene, I tend to use an old sheet or a velvet cloak for drapery reference and photograph that as well. After I’ve been away from the computer for dinner and some down time, I answer any emails that need immediate attention, and usually do a bit of work on personal projects or gesture sketching before heading off to bed.

What’s changed about your process and methods since you graduated from the Savannah College of Art and Design?

I became a lot more comfortable with custom brushes in Photoshop, which save a ton of time under the right circumstances. I also learned more of the nooks and crannies of the program, like using adjustment layers and so forth, and in general became more reliant on Photoshop. I think back then I worked on pieces about 2/3rds in Painter, 1/3 in Photoshop, and now it’s more or less reversed, as I tend to use Painter for detailing, blending, and final touches, but Photoshop is my workhorse.

I shoot a lot more of my own reference now, too; back then, my digital camera wasn’t very good, so I usually chose a character’s pose based on what I already had in my reference files. Now, I find I benefit from planning out the color areas, so that I can decide on the best lighting scheme for the piece, and then shooting reference and tightening things up later.

You said in a 2009 interview that you were trying to push your compositional and anatomy skills. What have you learned about both since then, and what are you still working to be able to do?

I think my facial anatomy/handling certainly improved in the interim, and I became more comfortable with integrating characters into the scene they’re occupying. I also got a lot better at non-humans, which has generally served me well. I think for one company I was their designated horse illustrator, and one of my current client projects is certainly animal-heavy. I’m definitely still working on pushing my compositional skills; often I see another painting and think “Oooh, I wish I’d thought of that arrangement!”

I’m doing some film concept art as part of a production company’s pitch for investors; it’s been a really interesting experience, since I hadn’t done anything quite along those lines before. I have to do some compositional/lighting tricks, for example, to avoid showing the main character’s face in much detail, as they haven’t attached someone to the role.

I also recently wrapped up on some game splashscreen work, which was complicated—anything where the end product needs to be in clean layers (that is to say, characters have to be painted separately from their backgrounds and any overlapping characters must also be painted separately) is a bit of a challenge for me, since it means I have to be very careful about labeling all the pieces of the file and painting appropriately, rather than my usual tendency to just paint away and flatten once I get more than three or four layers going, and I think that piece must’ve had at least thirty layers in its final form.