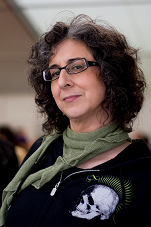 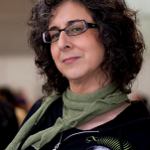 Ellen Kushner’s first novel, Swordspoint, introduced readers to the city to which she has since returned in The Privilege of the Sword (Locus Award& Nebula nominee), The Fall of the Kings (written with Delia Sherman), and a handful of short stories, most recently “The Duke of Riverside” in Ellen Datlow’s Naked City. Her second novel, Thomas the Rhymer, won the Mythopoeic and World Fantasy Awards. Kushner has taught writing at the Clarion and Odyssey workshops, and is a co-founder of the Interstitial Arts Foundation.  In 2011 she co-edited Welcome to Bordertown with Holly Black.  Kushner is also the longtime host of the public radio show Sound & Spirit. She has just finished recording the audiobook of Swordspoint for Audible. Kushner lives in New York City with author & editor, Delia Sherman, and no cats whatsoever.  It is all clearly explained at www.EllenKushner.com.