A Softness of the Heart

Aunt Violet had been sick for a long time before she died. The doctor said cancer, but Louise’s Aunt Sinna said it was a soft heart. Louise was inclined to agree, knowing little of this cancer business. Anyway, Aunt Sinna never, ever lied.

Louise made the cocoa for the two of them now. She did just as she was taught by Aunt Violet: broke a dark chocolate bar into tiny pieces and melted them with great sloshes of almond milk. And she always made a third cup, for the ghosts that Aunt Sinna tried so vehemently to banish from the house.

“I swear, Louise,” Aunt Sinna said one Sunday afternoon before sitting down on their old floral sofa to drink her cocoa, “I thought the ghost problem would get better now Violet is gone, but it looks like it’s your soft heart encouraging them now.”

Indeed, Aunt Violet was surely well loved by the ghosts. The local newspaper had even run a story about how Aunt Violet’s funeral had the most ghosts congregated that anyone had ever seen. Louise had kept a clipping of the article, and it made her smile whenever she pulled it out.

“Do you think Aunt Violet is one of these ghosts now?” she asked. “Auntie Violet loved to be nice and warm. I bet she’d enjoy sleeping in the rug or in the corner of the cupboard under the stairs.”

“Don’t you think we ought to let her be?” Louise asked, sipping at her cocoa.

“What? Why?” Aunt Sinna said. “She knows she ought to be moving along, and not bothering us! And if she’s forgotten, well, I’ll be reminding her shortly.”

After that, Aunt Sinna cleaned with even more vigour, dusting ghosts out of the cobwebs left by money spiders between the bannisters, out of the kettle, and from behind the heavy velvet curtains in the bedrooms. But still, the ghosts persisted.

One night, when Louise was tucked up in bed underneath the patchwork quilt Aunt Sinna had made her, she awoke to an unusually loud howl. She sat up in bed, groggy, and listened. A second howl came, and she relaxed, the prickling on her skin calming as she confirmed yes, it was only a ghost—thank goodness! The third time, she realised it wasn’t a howl at all; it was her name.

“Looouise,” a ghost moaned in the hallway through her door. “Looouise!”

Louise frowned and swung her feet over the side of the bed. None of the ghosts had ever spoken before. She wondered if this was a particularly smart ghost, perhaps one that lived between the pages of her diary.

She crept out of bed and opened the door. Outside, a ghost glowed in the moonlight coming through the hallway skylight. She could see the dust motes illuminated by it, passing through it, ready to settle.

“Can I come in?” moaned the ghost.

Louise shifted her weight from foot to foot.

“Okay, ghost,” she said, and opened the door wider to allow it in. As it passed through her, producing goosebumps on her arms, she remembered her manners and asked, “How do you know my name, ghost? And what’s yours?

“It’s your Aunt Violet,” said the ghost, who went to hover over Louise’s bed.

“Oh, hello! It’s awfully good to see you, Aunt Violet! I didn’t recognise you in the dark!”

“Good to see you too, Louise,” said the ghost.

“I told Aunt Sinna you might be living in the carpet,” she said, and climbed onto the bed to sit under her ghost aunt. “But she just would not believe me! She said that even if you were, it was really time to move on.”

Louise shifted uncomfortably, and looked down to hide the flush on her face. Aunt Violet, when she was alive, always noticed when Louise was embarrassed. Louise hoped that in dying, Aunt Violet would not be quite as canny.

“What about Aminah?” she asked, trying to sound nonchalant about the girl who sat in front of her at school.

“Talk to her,” said her ghost aunt. “Tell her how you feel!”

Louise decided to staunchly ignore her ghost aunt’s advice. Violet had died of a soft heart, after all, and Louise did not want to join her quite so soon. So she didn’t speak to Aminah for the whole week, didn’t even say hello like they usually did. All the while, Aunt Violet haunted her.

“Louise,” her ghost crooned from the back of the Maths class.

“Louise,” her ghost moaned from the ceiling of her Music class, disturbing everyone’s rhythm on their glockenspiels.

“Louise,” her ghost cooed, nestled in the basketball hoop during dodgeball.

Louise tried her best to ignore it. The only time the ghost left her alone was when she was with Aunt Sinna. She had to explain to her Year Five teacher who the ghost was, and the fact that nothing she tried had made it go away. He, too, was impressed it knew her name, but he was tired of his class being interrupted.

“It’s all very well that you’ve got a ghost friend, Louise,” Mr. Cunningham had said. “But all it seems to do is call your name—you had better learn how to get rid of it, or else how will anyone be able to concentrate on their long division? We can’t have a repeat of last year, when Maisie had that ghost follow her for the whole term!”

That day, Aminah and Louise smiled at each other as they took their places at their desks after lunch, and Louise felt her heart seize right up until she had fallen into her seat behind the Aminah.

Ah-min-ahhh, she’d said to herself all lesson, hardly concentrating on Jane Eyre’s predicaments up on the board. She saw Aminah’s hand shoot up more than a dozen times over the lesson, as usual. Aminah always knew the answers. Louise wished she was half as smart. But all she could do was whisper under her breath: Ah-min-ahhhh, drawing out the last syllable so it was much like a long sigh, like the wind lisping through a crack in a window. Ahhhh.

When she got home that evening, she decided she would talk to her Aunt Sinna about the ghost.

Aunt Sinna, after a few moments, laid her needles down on the living room table, and came to sit next to Louise.

Louise gave a feeble nod, and bit her lip. “I have to ask Aminah out.”

Louise pursed her lips. Aunt Sinna was level-headed about everything, including matters like love.

“Well, then, have a good long think about it,” Aunt Sinna said. She waved her knitting needles angrily to displace the ghosts that had already settled into the knots of yarn. “Nobody else can help you make decisions.”

“Oh,” Louise said. “But in books, someone tells the character to listen to their heart, and they do, and they know immediately what to do.”

“Absolute codswallop, Louise,” Sinna said. “Our hearts are very unreliable. Do whatever you want to do—not what your heart says, or anyone else, especially Violet. She was always listening to her heart, and look where that got her.”

Louise nodded, solemn in the truth.

The next day, Louise saw Aminah on the playground before school. She stood for a moment at the school gates, and smiled the secret smile of someone who has seen true loveliness. Aminah’s dark hair was wild that morning, tormented by the wind, and her eyes were alive with the laughter of something a friend had said. Her school jumper was already too small for her, and each small gesture made the sleeves roll up higher.

Soon, the term would end for Christmas, and she would have to go for a whole three weeks without seeing Aminah. The school bell rang for class, and Louise, eyes fixed on Aminah, knew she had to say something. She shouted across the playground—Ah-min-ahhhh—and watched the girl stop, turn around and smile as she saw Louise running towards her.

Aminah’s friends carried on walking, leaving the two of them alone but for the wind. Louise’s throat was sticky, trying to get the words up, but she forced them through, like sticking a knife in honey.

Aminah looked at her intently. As the silence stretched, a frown appeared on the other girl’s brow, and Louise felt a panic inside of her. Was this what she wanted to do?

“Louise, Looouise,” said the wind, whispering in her ear.

She felt her breath return to her, and steeled herself.

“I really like you,” she said, her face immediately turning bright red.

Aminah seemed to consider this. Then, her frown disappeared, replaced by a shy smile. Louise felt her hands grow clammy as she waited, and her fingernails dug deep welts into the palm of her hand.

Louise breathed out a good long sigh. She felt her shoulders relax, and a trickle of sweat fall from her forehead. She wiped at it, embarrassed.

“Are you free after school?” Louise said, before she could talk herself out of it. “Do you want to go for ice cream with my aunt and me?”

They walked to class together, complaining about the things that Mr. Cunningham did that annoyed them. Louise pretended to be in her body, but felt more like she was soaring above them, struggling to keep her physical self from leaping off the ground to try and fly too.

The two Aunts, one alive and one corporeal, sat in silence, but for the clicking of Aunt Sinna’s knitting needles.

“I think that means you’ll be taking her out for ice cream today,” Aunt Violet sighed.

Aunt Sinna frowned up at Violet.

“You know, that means you better hurry along now,” Aunt Sinna said sternly. “You’ve done your bit of sticking your nose in, it’s time to move on. Understand?”

“Yes, Sinna, if I must,” moaned the ghost of Aunt Violet, before she whipped out of the house.

Aunt Sinna smiled a satisfied smile, and thought about making herself some cocoa.

What she didn’t see was Violet’s ghost trailing around the house before it found an open window in the kitchen. Through it, Aunt Violet slipped, and, after some searching, found the perfect crack in a teacup to shimmy into. It would be warm and safe there, she decided, where Sinna may not find her for a while. 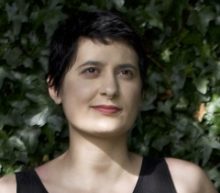 Lulu Kadhim is a British writer living in Vancouver. Her game credits include Industries of Titan and Phantom Brigade, and her fiction has appeared or is forthcoming in Lightspeed, khoreo and Translunar Travelers Lounge. She is a graduate of Viable Paradise XXI and  Odyssey 2019.