A girl is born with a hole in her heart.

Her parents cannot touch her for weeks; instead, they whisper in immigrant languages over the rune-inscribed plastic tube in which she sleeps: terrified, for the first time, of death. She is so tiny—fists small as a doll’s, fingers the clenched sepals of some infinitesimal flower—and as they watch the tufts of her hair, her mouth opened in a cry no one can hear, a love swells in them so fierce and pure it hardly fits their skin. She becomes their anchor, their cause, their newfound gravity. She is the million lives they have never lived.

As the girl grows, the hole closes. This is what the doctor says, with his stethoscope and his herbs. But there’s always a distance to her, a watchfulness. At five years old, she curls up with ketchup-stained grimoires and wrinkled library scrolls as other children tumble in the sunshine. When asked to play with her little sister, she leaves the toddler in the basement pantry, draws peacefully in her bedroom as the younger girl sobs below.

What were you thinking? her parents shout, but she only shrugs, picks up her crayons again.

There’s something wrong with her, the parents think, meeting each others’ eyes. Something missing.

Always, always she is alone.

When the girl grows up, she runs away to the city.

She keeps in touch, of course—in this crowded mass of pickpockets and haunted libraries, curse-writers and street drugs, it is dangerous to go unnoticed for too long, to wander so deep into the night that only a blurred three a.m. Uber can bring you home. More than that, though, she senses that her parents need to know she’s still her. Still theirs.

Besides: in the end, they’re all she has.

In time, she finds a coven. Apprentice, they dub her, and send her out for sandwiches in between spell-working sessions. Though she is jostled along on the sidewalk, she finds herself floating in ecstatic bliss: she is making a living with her magic, albeit in a roundabout way. She is becoming her own.

Yet her parents’ doubts creep in, during their weekly calls. That she’ll be stuck ordering sandwiches forever, or her job taken over by algorithmic enchantment. That she is not enough. That what she holds so new and tender in her hands is only half a life.

The wyverns piss straight onto the sidewalk, she finds herself telling them over the phone. The basilisks stalled the train for two hours today. And there’s a certain relish in her voice—words are another spell she is learning to weave, and alone, without her parents’ stilted tongues to twist her around, she is finally becoming fluent in the only languages she has ever loved.

But their words and hers twine and blur in her mind—hopeless and shameful and destroy your own life—until one day she walks into the coven’s office suite seeing only its soulless fluorescent lights. Until her bosses’ polite requests become leers become outrages, and she lies in bed at night contemplating poison or a starvation or a cold lake in the dead of winter, and is not even sure who planted the first seed of her despair.

The coven sours on her soon after. One incorrect entry into the grimoire, and the things in her care begin to fall, quick and hard as dominoes. The witches stop smiling at her. Another apprentice leaves, and her coworkers mock his accent, his hair; she suspects they do the same to her when she takes lunch outside the office.

All that time, her parents wait on the other end of the line.

We know you, they tell her, as her tears seep into the receiver. We love you.

What they don’t say, but she hears anyway: We’re the only ones who ever will.

A girl is born with a hole in her heart.

She is not weak—or at least, she was strong enough to leave, even if she wasn’t strong enough to stay away. For weeks after she returns, she curls into her childhood bed and cries silently for the life her own hands have torn away.

Outside her window, the robins sing their courageous songs. The spring air smells sweet, like new life.

She knows, this time, it will be even harder to leave.

Where are you going? her parents ask every time she unlocks the door.

When will you be back?

Why don’t you spend more time with us?

Their words bind her close; their eyes inspect her hair, her arms, every wrinkle of her clothing, even as they tell her she is safe, she is known. She doesn’t blame them—her surrender has made her theirs again and, in the absence of rent, does she not owe them at least permission to interfere? But in a new, magic-less office, stiff-backed under different fluorescents, she thinks of how love, once pure, grows complications. As she eavesdrops on her parents calling her younger sister, who is busy and eager at her first internship, she dreams of a cold revolver kissing a silent temple, of walking out into subzero winter wearing only a sundress bright as escape.

She thinks: if only she had not fled to the first shelter offered her.

She thinks: if only she had been an ounce less lonely.

She thinks: if only she was not missing a piece—the piece that loved, that wanted to live.

The next morning, she rises from her bed, eyes puffy from last night’s tears, and sketches a spell on the scuffed wooden desk. Her hands move with the utmost care; her fingers trace perfect runes in the dust. She has watched the witches write a dozen enchantments for running away: from partners, from taxes—even, briefly, from death—and it’s only a matter of tweaking a couple parameters, Googling some of the less-familiar symbols.

When she is finished, she steps back, heart pounding.

Her spell is not, at first glance, one constructed for evasion. She has erased the invisibility constraints; the runes that blur reality have been flipped on their head. Traced on her desk in dust and graphite and blood is something strong as steel, and rushing and full as ocean waves.

It is a spell to fill her up.

It is a spell to break her away from fear—of those words, those eyes.

She opens her mouth to incant, and the air tastes like light.

A girl stands on the threshold, a duffel bag hanging from one shoulder.

She is fully grown now, with her mother’s eyes and her father’s grim determination. Her parents, sitting at the dinner table, think of her face once pink and crumpled behind plastic, those fingernails like little perfect sequins. The plunging terror that, even as they created a life, they had, too, created a death.

Where are you going? they ask, and she looks at them.

Away, she says, and her voice is not that of a child, but one that has bent the rules of light and sound. I’m sorry. I just wanted to say goodbye.

Her parents put down their forks. Something careful stretches through the air, like the smell of a tumid river they have long left behind.

They ask, softly: Why?

You can tell us, you know.

We won’t stop you from leaving.

The girl opens her mouth, and breaks.

And she is so, so tired.

For a long, wordless minute, they see her, this girl with a hole in her heart that never closed. Their anchor, their cause, their child weighed down by gravity. A grief passes between them that, only later, in the quiet of their bedroom, will they put into words. Regret for years of harshness, and striving. A joy abandoned along the road to staying alive.

It has been hard, in this new country. Their own old lives have continually haunted the new. But the fierce burgeoning thing inside their skin that they have named love was never supposed to do this kind of damage.

The girl leaves, after that, with an extra backpack of nutrition bars and beef jerky. She had already made her decision, but her parents’ blessing is a balm all the same.

Safe trip, her father says, holding open the door, and she wants to fall into him, she wants to weep. If the powers will it, we’ll still be here whenever you want to come back.

She wraps her arms around him, and her mother. Then, lightly, she steps out the door.

Author’s note: The first sentence is after a line in V. E. Schwab’s The Invisible Life of Addie Larue. 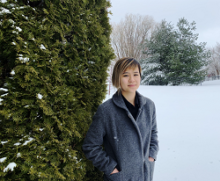 P. H. Low has been published in places such as Tor.com, Abyss & Apex, If There’s Anyone Left, and Star*Line. She is a proud graduate of Viable Paradise 23, and can be found on Twitter @_lowpH and at www.ph-low.com.