Three more big swallows should keep the beast inside. Lupita sat against the wall, on the kitchen floor littered with broken glass, panting from the pain, clutching the canteen in one hand, the bottle cap in the other. Her body screamed for her to stop drinking the liquid fire that would keep her human for another day.

She lifted the canteen to her lips with a shaky hand, took another mouthful of the rotten-sweet suppressor cocktail, and screwed the cap back on before the tremors started in her legs, running up her spine. She screamed when the suppressor reached her head, stirring hidden memories.

Lupita clutched at the silver medallion of the Virgin of Guadalupe. It hissed in her palm like bacon on a hot grill, like the leftover boiling potion that spilled on the tile floor when the glass vial fell out of her hands.

Garlic, to purify the blood.

—Night. The stink of exhaust fumes. Hungry. Thump-drag, thump-drag, scratch. Faint smell of blood. Hurt rabbit on the other side of the road.—

Chamomile, for warmth and comfort.

Uña de gato, cat’s claw herb, to ease some of the pain, and because coyotes hide from cougars.

Spoonful of honey, to pass the rotten taste, and to keep sweet consciousness. Keep the beast in check, on a leash.

Knocking on the front door.

Lupita yanked herself up on her elbow. She hated her stink. Her tank top and khakis were soaked through. Was it a lone hiker or one of the Rangers wanting to refill his water bottle? Or was it her latest victim, tracked her down?

Rapping at the door. “Hello?” A young voice, a preteen boy. “I know you’re in there. I followed your scent. It’s weird. I can smell everything now. It’s like I didn’t have a nose before.”

So, he had found her. One so young. What an awful crime. She kissed the medallion of the Virgin, leaving a red oval on her lips. “Forgive me, mother Mary,” she whispered. “I will make it right.”

She put the canteen strap around her neck, got up on shaky legs, tremors rattling her every few steps, and wobbled to the cupboard. She reached onto the highest shelf and felt for the cold metal cylinder.

Lupita reached the dining room table, with the morning newspaper still on it.

The door opened with a crack and flying splinters of wood.

She raised the gun at the intruder.

“Sorry,” the tan, disheveled, scrawny boy said, before the sawdust settled. “I don’t know my own strength anymore.”

Unlike werewolves, who look for their own out of a sense of camaraderie towards the pack, coyotes hunt alone, and seek others like them to get rid of the competition.

The boy with the low, heart-shaped, brownish-gold hairline and long sideburns took three steps inside and saw the gun. “Whoa.” He raised his hairy, long-nailed hands, palms out. “I said I was sorry.”

With her free hand, Lupita snatched up the local newspaper from the table, and held up an inside page for the boy to see.

LOCAL MINER AND SINGLE DAD FOUND DEAD IN HIS HOME

“Did you do this?” Lupita asked, already knowing the answer.

The boy stood tall, with his chin up, his voice defiant, and stated, “Yes.”

Lupita felt like slapping some piousness into the little fool, until he turned his back to her, and lifted his shirt.

Some of the slashes on his back were open and new, others were old scars. Not the kind made by low branches or brambles, or even the barbed wire around the farmsteads. The boy turned back around, “I put the belt in his hand so people would know. He’d been lashing me since I was seven. To ‘purify my soul,’ he’d say, because I was a bad boy—a sinner.”

Lupita hid her medallion in one hand, still holding the gun with the other. “I’m going to shoot you in the leg, and in a little while, I’ll call an ambulance. You still have a chance of living a normal life if you get a blood transfusion. I’m sorry I did this to you.”

The boy’s gold-speckled brown eyes opened wide. “Don’t be. You made me strong enough to defend myself for once. You saved me! Please don’t make me go back to being helpless. I have no one.” The boy went down, crying at her feet. “I’ll learn to control it. You can teach me. I’ll never kill another person, I swear!”

Being a good-looking woman, Lupita had learned helplessness at an early age, as well. She knelt beside the boy. “What’s your name?”

“I will teach you, Vicente, only if you pray with me, and do as I say. The man who hurt you didn’t know God. You must learn to suppress the beast of hate inside you, and to be innocent as an animal. Understand?”

She put the gun on the hardwood floor, and took the canteen dangling from her neck. “And you must drink this. We cannot change tonight. The Rangers are looking for coyotes.”

The boy hugged her. 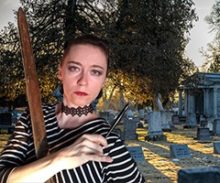 Catherine J. Cole is a Hispanic writer of science fiction and fantasy who won 1st prize in the Metamorphose Vol. 2 Science Fiction Short Story Contest, and received two Honorable Mentions in the 2020 Writers of the Future Contest. Some of her short fiction can be found in Through Dark Eyes by All Worlds Wayfarer Magazine, Broadswords and Blasters Issue 6, Breaking Bizarro, and other fine publications. She is a graduate student of English/Creative Writing at Texas Tech University and holds a BA in Graphic Design and Publishing. Ms. Cole has lived in the United States, France, and Colombia. Besides writing, she is a licensed English-Spanish translator. Follow her on Twitter @CJCole2U and check out her website www.catherinejcole.com.