The first time Robin spent the night at my house was the first sleepover I had that there wasn’t some kind of complaint from under the eaves or deep in the walls. We were eight years old and Robin slept in a leopard-print sleeping bag that filled the space on the floor between my bed and the wall.

“You still sleep with a nightlight.” And Robin’s tone wasn’t snotty and mean the way Tina’s had been. There was no unspoken baby at the end.

“Yeah.” I rolled over and looked off the edge of the bed. “Don’t turn it off.” The bulb wasn’t too bright to keep me from sleeping, even without the plastic bunny cover it had once upon a time.

In the long silence that followed Robin’s words, I held my breath and waited for Robin to turn it off anyway. Tina had, after all, and the house had been full of terror and nightmares. That was the only time Tina spent the night.

I breathed again and my eyelids drooped while the house whispered chaos and dreams through the whine of electricity in the walls, and the gurgle of water in the pipes, and the hum of the box-fan in the window as it dragged salt-misty air in from outside.

Robin said, “You have a fish on your wall,” and I was awake all over again.

I looked from Robin’s dark curls to the indentation in the wood. Robin’s fingertips hovered a breath away from the wall, the nightlight showing just how messily I’d applied the hot pink nail polish. I pressed my lips together, could kind of see how Robin got a fish.

The white paint over the wood rippled, like the flutter of eyelashes or the dreaming flick of my gramma’s wrinkled eyelid, as if it knew we were talking about it.

Robin tucked back into the sleeping bag, nodded. “Is your house afraid of the dark?”

I swallowed and whispered, “Yes.”

“So’s mine.” Sleepiness made Robin’s voice softer and a moment later, a snore—a real snore—came from the floor.

The paint and the wood settled, safe in the yellowed glow from the nightlight. “G’night, house,” I whispered.

Ancient dreams lulled me to sleep.

The last time Robin spent the night at my house, we’d both graduated from high school and Robin would be leaving the next day.

Fall had crept up on us faster than I wanted.

The leopard-print sleeping bag was on the floor, the glow of the nightlight showing the worn patches and frayed stitching along one side of the zipper.

We were both in my twin bed. Robin was the little spoon.

I’d known the house for eight years longer than I’d known Robin, and Robin couldn’t stay any more than I could leave.

Robin rolled over, never once drawing away from me. Lips right against mine, Robin whispered, “One last time? So I don’t forget you?”

The storm that had threatened earlier in the day rolled in, thunder rattling windows and rumbling through us as our lips touched.

Lightning turned my room impossibly bright and the house whispered our secrets through my head, a scrapbook of every moment we’d spent together, etching those memories heart-deep into my brain.

And I licked and kissed those secrets over Robin’s skin, traced them along Robin’s ribcage, over hips, belly, thighs, and then sighed them into Robin’s mouth before we fell limp, legs and sheets tangled, Robin settling back to be the little spoon again.

Rain battered the glass of the open window, soaked the wispy curtain that did nothing to block the storm.

Robin clung gently to my hand.

“G’night, sweetheart.” I pressed a kiss against the back of Robin’s head.

Ancient dreams slithered over us to protect us from the wind and the rain. 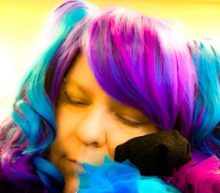 Aynjel Kaye is a queer bioluminescent deep-sea monster in a human suit, lured ashore by the promise of chocolate lava cake and fancy cocktails. A graduate of the Clarion Science Fiction and Fantasy Writers’ Workshop, zir work has appeared in Strange Horizons, Polyphony 5 (Wheatland Press, 2005), So Fey (Lethe Press, 2009), and Daughters of Frankenstein (Lethe Press, 2015). Zie makes zir home near the overcast coastline of Washington State, where zie wrangles computer issues by day and gleefully stalks pixelated prey when the sun goes down.  If you listen carefully on a moonless night, you might catch zir whispering strange stories about love and other slippery, slithery things into the void. Find zir online at digital-delirium.org and on Twitter as @aynjelfyre, where zie often grumbles about stories oozing beyond the bounds of short fiction word counts.