The storyteller sits on a plastic stool by the side of the street. Rickshaws trundle past; cars honk their horns. Cart vendors crying their wares (“Beef noodle soup! Dragon’s beard candy! Scallion pancakes!”) swear at him for getting underfoot on the sidewalk.

Children, released from school gates in a delirious swarm, run shouting through the streets. The storyteller smiles with yellow-stained teeth as they clamor around him, coins in hand. They settle on the curb and on the road, oblivious to the warning shouts and horns from vehicles that swerve dangerously close.

Coins clatter into the storyteller’s tin pail. Eager eyes watch him impatiently. He flicks his cigarette lighter and lights the first incense stick.

When he speaks, the universe shifts to listen. The city holds its breath. He tells of lady pirates and sea battles, fox spirits and unwary men, monkey kings and jade rabbits.

Smoke coils up into the sky. The stick burns down steadily, powdery ash gathering at its base until ash is all that’s left. He pauses until new coins rain into the pail, and then he lights another incense stick and tells on.

The children leave one by one as the sky darkens, lured away by the siren call of dinner. But not the girl in the torn shirt, with her unwashed hair and her tattered schoolbag. She has nothing and no-one to go back to. So she loiters there on the sidewalk, scuffing at the pavement with her shoe. She flicks her gaze up to meet the storyteller’s eyes, wordlessly pleading: one more story.

The storyteller’s incense stick has burned down to a stub. He frowns and points to the money pail. The girl rummages hopelessly in her pockets, even though she knows there is nothing there.

“You,” he says, leaning down and pinching her ear between long-nailed fingers, “have not paid.”

She did not think he had noticed. She always stayed small and inconspicuous in the crowd of children, shamefacedly keeping her hands in her pockets when the others threw their coins.

“Everything has a price, my little story-thief. You are here every day, but you have never thrown a coin. You are in debt, and you must pay.”

She flinches away from the storyteller’s clawed hand.

“I haven’t got any money,” she stammers.

“There are things more valuable than money.” He places another incense stick in the burner. The smoke smells of something sharp and bittersweet. “Tell me, girl, what are stories? What are they made of?”

“Memories. You will pay me, little thief, in memories. I will have your story.”

He laughs. That laugh is a high, cold thing, jagged at the edges. “Of course you have a story, little one. You sit here, amazed by tales of dragons and phoenixes, even though they are common as houseflies in some parts of this universe. Never realizing that you would be wondrously strange to a creature in some distant galaxy, who has never heard of little girls or cold nights or city streets. I will tell them your story, and they will listen, and they will pay.”

She gazes, hypnotized, at the burning point of the incense stick.

“Your choice,” the storyteller whispers, his eyes burning red in the dying sunlight. She’s never noticed before, but he has very sharp teeth. “Will you pay? Or will you run?”

The smoke swells larger and larger, until grey is all she can see. Her memories rise in flashes of vivid sensation: cold raindrops on her face, wind in her hair, the bite of hunger in her belly….

And then smoke, and fire, and two red eyes, and she remembers nothing.

The storyteller, with his long claws and sharp teeth and red eyes, blows out the incense stick. The fire dies, and darkness falls.

When the sun rises, the storyteller is gone, but the girl still sits, silent and staring, with no story left inside her. 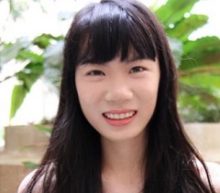 Megan Chee has lived in Taiwan, Hong Kong, and the United States, and is currently based in Singapore. Her short fiction has appeared in Athena’s Daughters: Volume II. She holds a Bachelor of Science in Applied Economics & Management from Cornell University, and works as an auditor. You can find her online @meganflchee, where she admittedly lurks more than she tweets.