When I was a little girl, I’d experience premonitions, like the time I sensed that Mrs. Weatherby should stay home and not take her usual walk around the neighborhood, but of course she did anyway, because who listens to a six-year-old? and got caught in the grill of a self-driving car, which were everywhere in those days, like the kudzu climbing up every tree, swallowing abandoned houses like the old Ripken place, where I’d sit for hours, where there was no sound but birdsong (so much birdsong then, and I didn’t know to treasure it) and in that decaying house the vines were invading so fast I believed I could hear them grow, which was ridiculous, since back then nothing grew that fast. What I’d thought was sound was only a different kind of premonition, an even less useful kind than the one that failed to save Mrs. Weatherby, because this one is clear only now, sitting on my porch, listening to the susurrus of a million million pueraria apocalypsis vines growing, spilling over every surface, spreading so fast that one day I fell asleep on the porch and woke to them curling over my arms, their rough strands caressing my skin, and now I realize that all this has been about you, Clara, and how I knew before you told me that you were leaving, joining the other refugees pushing north, abandoning places where only heat and wild growth were left, and that was no premonition, just knowing someone well enough that you sense what’s coming, the way I sometimes did when you would come home with your eyes insatiable and I knew we’d spend the evening tracing patterns like new growth over each other’s bodies, and what did that empathy get me? It was of more use than premonitions, but could not stop you from leaving, could not stop this city from collapsing around me, the way everything we build does, for nature is quick to erase us once we leave, and always was, even before the vines grew so fast I could hear them, even before I began to wonder where my hair stops and they begin, for sometimes their tangle on my skin caresses like your fingertips, and truly they feel that way even now, even though we’ve fucked up the world and the die-offs continue and birdsong is silent and the vines grow and our house groans under their weight, like it wants to give in, to be pulled down, down into the loam, the way that even skyscrapers do, now, to make way for something new, if the vines will allow anything else here. The planet will survive us, and if intelligence isn’t an evolutionary cul-de-sac, which you always believed, Clara, and which I confess I never stopped holding against you, even though you were right, because you were right, just as you were right to leave, and even if there is some future intelligence, we will all be gone, the works of our age shattered. A few seasons is long enough to pull apart our roads, a few lifetimes to erase most signs of our passing, and if birds are still singing elsewhere, maybe the ravens will remember us and tell our stories, laughing at all we had and couldn’t keep, and they too will be right, but I was tired of fighting to survive, and I know this is the price we pay for trying so damn hard to destroy the world, and all this is to say, Clara, I hope you are well, alive and joyous, and maybe you were wrong after all, and humans will survive and even thrive (another premonition, or just a hope?), but what I wish I’d understood when you left is that the worth of something isn’t measured by how long it will endure, which you surely knew, or you would not have nursed injured animals back to health. You always knew it, and I have learned it at last: I am not leaving this porch, never again, for the vines require nothing but my acquiescence, and they will grow over and through me and I will be part of them, just as I am part of this change, and so are you, and so is the silent birdsong that I still hear, even over the whispers of vines, even over the relentless effacing years. 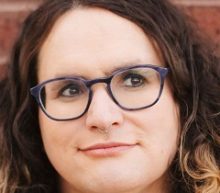 Izzy Wasserstein is a queer and trans woman who teaches writing and literature at a midwestern university and writes poetry and fiction. Her work has appeared in Clarkesworld, Apex, Analog, and elsewhere. Her most recent poetry collection is When Creation Falls. She shares a home with her spouse Nora E. Derrington and their animal companions. She’s an enthusiastic member of the 2017 class of Clarion West and likes to slowly run long distances.