In a furniture showroom in Stockholm stood a large wardrobe called a Kleppstad. It was made out of cheap particle board and wooden pegs. If the shelves were removed and a person scrunched inside, the back panel would disappear and a passage would open into the shuddering woods of Myrkvior, where the highland trolls dwell. But a forklift backed into the wardrobe and it was taken to a dumpster.

In a weedy glen outside Evesham was a mound with a shallow hole that happened to be a second entrance to Wonderland. Nobody ever fell into the hole, although more than a few stumbled over it. Once, a girl lost a shoe. The hole was paved over when the A44 highway was extended to Oxford.

In the coastal town of Komatsu was one of the world’s oldest hotels, Hoshi Ryokan. The grounds contained a hidden hot spring that was a portal to the Dragon Tooth Temple. To enter the portal, one needed a noble heart, a brave soul, and a still mind. The nervous and reclusive tea master, Kobori, often visited the hotel. He witnessed dozens of travelers entering the hot spring, disappearing into its depths. Although he attempted many times, he never breached the portal. Kobori studied every inch of the hot spring, prodding the stones, and he often dunked his head, but still no success.

Never was the stained futon stored in Marta Cruz’s basement in the suburbs of Lima struck by a wooden spoon. If it had been, the futon would have sprung to life, flown through the nearest doorway, and then soared above the barrio. The futon was capable of transporting passengers over the ocean to the magical island of Namboobu, where they could interact with talking animals. Unfortunately, the futon was destroyed in a flood.

Above a restroom sink in a Kiev gas station was a cracked, dirty mirror. If a person ingested amanita muscaria mushrooms and looked directly into the mirror, they would get sucked through the glass, starting with their hands and ending with their feet. On the other side was a stone stairway that led to the crypts of the Kings and Queens of Scythia. This portal was lost when an employee accidentally shattered the mirror with the handle of a mop.

After years of frustration with the hot spring, Kobori tried asking the travelers how they entered the portal and reached the Dragon Tooth Temple. They only shook their heads and laughed. Kobori bowed, shuffled away, and never asked again. But he continued to spy on the travelers, growing more and more resentful of their journeys.

Beneath the Hoggar mountains in the Sahara desert was a jutting stone formation. If a person uttered a secret phrase, the sand-bitten stone shifted aside, revealing a large cavern containing immense treasures. Enough gold to blind you. Enough jewels to bury you. But the treasure was never discovered. Not only had the phrase been forgotten by history, but also the language in which the phrase first occurred.

A storm in Nebraska moved eastward until a tornado spun up. It picked up a house and tossed it a half mile into the sky. Oddly, if somebody had been inside that house, they would not have been battered, bruised, or scattered among the debris. Instead, they would have woken unharmed in a field of poppies, over the rainbow, in the Land of Oz. But this never happened. The owners were vacationing in Florida.

One day while drinking tea outside the hot spring, Kobori felt the ground tremor. The stones beneath the hot spring shifted, the water bubbled, and his teacup flipped over. As Kobori crouched, waiting for the earthquake to cease, he was mesmerized by the tea leaves spreading over the stone. A pattern formed in the leaves, a circle with two lines. Months later, after the travelers stopped coming, Kobori realized what the tea leaves had meant. The hot spring had been damaged by the earthquake. The portal was lost. Nobody would visit the Dragon Tooth Temple again.

The number 14 streetcar, which ran down Saint Charles Avenue in New Orleans, when taken to the end of the line deposited its passengers at the entrance of Lafitte Alley. The alley was frequented by vampires, snake charmers, and voodoo practitioners. But the city renovated the number 14. New paint was applied. The windows were unstuck. The wheels were greased. And the passengers could no longer locate Lafitte Alley.

Magic beans, the sort that grow into large beanstalks, climb upward, pierce the clouds, and reach the castles in the sky, are extremely rare. Even when they do appear, the beans are seldom replanted. Instead, they are steamed, added to casseroles, or sauteed in butter.

After he discovered the symbol for lost portals, Kobori practiced reading tea leaves every day. Not only could he discover when a portal was lost, but also from where on Earth it had disappeared. Finding the pattern became a great joy. Sometimes he would discover two in one day. Other times, none for many weeks. Of course, he never visited these portals. Why should he? They were lost.

In the Catskill Mountains lived a hermit who brewed cider flavored with chokecherries. Occasionally he wandered through the woods and gave away corked bottles. The cider was pungent and caused a deep slumber that lasted months, years, or decades. Sleepers would wake unaged, transported to the future. No one knows what happened to the hermit, but some believe it was his bones found by hikers at the bottom of Verkeerderkill Falls.

While cleaning her attic, Ms. Whipple of Melbourne discovered an unopened board game. During her grandchildren’s last visit, they decided board games were boring. They hadn’t realized that the game opened a doorway to a tropical jungle, lush and humid, stocked with lions, wildebeests, and great apes. Mrs. Whipple tossed the game into the trash, along with a stack of comic books.

For the rest of his life Kobori worked tirelessly, brewing tea and searching for lost portals. Yet he never forgot his failure to breach the Dragon Tooth Temple. He never forgot that he lacked the noble heart, the brave soul, and the still mind. And he never stopped feeling resentful of the other travelers. Thus, every time the tea leaves told him of another damaged or forgotten portal, wherever on Earth it had been lost, he silently rejoiced. 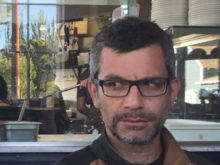 Mark S. Bailen is an author, website developer, illustrator, and lousy photographer. He lives in an orange cabin in the woods outside Flagstaff, Arizona with his wife and teenage son. His two favorite activities are hiking and doodling. He would do both at the same time if this didn’t increase his risk of running into a tree. He earned an MFA from the University of Arizona, attended Taos Toolbox, and participated in the Storied Imaginarium. He is a member of Codex and the SFWA. His work has appeared in the High Plains Literary Review, the Sonora Review, and Little Blue Marble. He has also written and illustrated an award-winning children’s book titled Earf. His website is at fakemountain.com.