Princess Nivedita is one year old when a wizard named Yash locks her heart and steals the key.

Nobody finds out who Yash is, for they never see him.

The King calls for help in carving another key, but none of the keys fit.

Nivedita becomes the Princess with the Locked Heart.

Nivedita is six years old when the lead archer of the King’s army, Amanat, lets her hold his bow.

She runs her fingers over the taut string. “Teach me,” she says. Her voice is flat, but her eyes are burning.

Amanat’s smile falters. “I would have to ask His Highness, Princess.”

Nivedita has never asked for anything, and so the King gives his permission, though his advisors tell him not to.

“Let her be happy,” he says, but his mouth droops in concern.

By the time Nivedita is nine, she has surpassed Amanat in her archery skills.

Even the advisors are impressed.

“Make her the head of the unit.”

“She has a locked heart. Her emotions are repressed. She’ll be easy to control. She’s perfect.”

This time the King heeds their advice.

At age eleven, Nivedita leads a group of archers into a war against the neighbouring kingdom. She is fierce and unstoppable, and never misses a mark.

“I killed seventeen today, Your Highness.”

“One hundred and fourteen.”

When Nivedita is twelve, the King fathers a son.

The King keeps him under high security and puts Nivedita in charge. She stands guard over his crib, her lips pressed tight, her eyes alert.

Sometimes, the King lets her hold him. The baby prince giggles and reaches for the curly locks of her hair, but she doesn’t let him touch those. She keeps looking down at him till his giggles turn into cries, till someone takes him away to calm him down.

At fourteen, Nivedita has her first kiss. She’s riding her horse at the edge of the forest, as she sometimes does, to hear the nightingales sing. It is there that she meets Ananya, a girl from the village who has come to pick flowers. Two weeks later, Ananya leans forward and gently touches her lips to Nivedita’s. The color on Ananya’s cheeks deepens as she pulls back, and for the first time in her life, Nivedita’s grip on her bow loosens slightly.

A week before Nivedita’s fifteenth birthday, they are discovered. A castle guard spots them together and informs the King.

“Punish them,” some of the advisors say.

“But the princess doesn’t know what’s right and what’s not.”

“The other girl does.”

In the end, the King gathers all the people in his Kingdom.

Everyone watches as a noose is put around Ananya’s neck.

“It’s not your fault,” the King says to Nivedita. “You have a locked heart. You are easily swayed. But I will teach you right from wrong.” His hands are hard on her shoulders, holding her in place.

“Please,” Nivedita pleads for the first time in her life, though she doesn’t know what she’s asking. “Please.”

At the last moment, the King gives the order to stop. He tells the guards to throw Ananya into the dungeons and turns to his daughter.

“Will you do anything if I keep her alive?”

Yes. She wants Ananya alive. That is what she was pleading for, she thinks.

She stands up straighter. “Anything, Your Highness.”

At sixteen, her first suitor comes.

“You will marry a man,” the King tells her. Nivedita thinks of Ananya, of kisses in the shadows of trees. She thinks of Ananya still alive. Her heart is a painful stone in her chest, but it’s easy to tamp down the feelings. She will hold up her end of the deal. She nods.

And then one day, Yash arrives to ask for her hand.

“I’ll give you your heart’s key,” he says, holding it out to her. “But you must marry me. Make me king.”

Nivedita stares at the glistening object. She thinks of Ananya. She imagines herself with an open heart. A rage rises in her as she stares at the sneering man in front of her.

“Give it to me,” she says, her voice hoarse from lack of use.

“Keep me alive and keep us married. The key will dissolve otherwise.” Yash laughs.

Nivedita stands up. She remembers the look in Ananya’s eyes before she was taken away. She remembers her loyalty to the King, her easily gained obedience. She doesn’t even realize that she’s released her arrow until he falls to the ground.

“Told you,” he manages to gasp before he stops moving.

The key in his hand dissolves.

For a long moment, Nivedita stands still, staring at his body. She hears the sounds of her brother laughing somewhere nearby.

She writes a note, renouncing her right to the throne.

Then she turns away and leaves the room.

Nivedita is a few hours shy of seventeen when she finishes making the key for her heart. She remembers its shape. She carves it in the secret shadows of the forest, shaping one of her arrows with memories of the moments she shared with Ananya. On a new moon night, she finally unlocks her heart.

Nivedita is seventeen and a few seconds old when she realizes that she loves Ananya and there is nothing wrong in that. Taking her bow and arrows, she rides away on her horse. For the first time in her life, she cries.

The tears still stream down her face as she throws away the key, into the river she passes.

The buried emotions break free and she screams into the night, howling under the invisible moon.

But now she can’t stop. She has one job still left to do.

Nivedita is seventeen and an hour old when she breaks into the castle she once called home. In the distance, she can hear shouts and running feet, and she wonders what lies they are going to provide for Yash’s death.

Whatever the case may be, she doesn’t care.

She steps into the dungeons where they’ve kept Ananya. As she catches sight of the first guard, she pulls out an arrow.

This time her heart is open, and she’s not going to stop until she gets the one she loves. 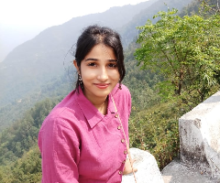 Tamoha Sengupta lives in India. She is a cyber security analyst by day and a speculative fiction writer (and daydreamer) at other times. She loves playing table tennis, watching anime, and spends hours just staring at her unfinished stories.  Her fiction has appeared in The Arcanist, Apparition Lit, Daily Science Fiction, Abyss & Apex, and elsewhere. You can find her on twitter @sengupta_tamoha.