I met Fawn in line for the bog witch’s coffee. At first, there was a man standing between us, but after a few days of waiting, he wandered off. Most people did, but not Fawn and me. We started talking once we were beside each other, sharing the food we’d brought. I’d brought a flask of bourbon, which she hated (and still hates to this day), but she gamely worked her way through it with me.

“Benita,” she said after every sip and accompanying shudder. “There’s something wrong with you.”

We laughed more and more while we talked about why we had come. For Fawn, it was the hope of hearing her future. Even with the loosening warmth of bourbon to make her talkative, there was a shadow in her dark eyes, a loneliness that she could neither shake nor hide. I wished I could shelter her, drain out the bitterness that tainted her smile.

I had come out of curiosity. I’d walked by the bog witch’s house hundreds of times while out hunting, but always from the edge of the bog. Even there, you could smell the coffee brewing through the scents of damp earth, acidic water, and peat. Beckoning, the pull so strong that I wasn’t sure if by coming I had passed a test or failed it. I’d seen the way people got stuck on the very edge of longing, their feet sinking into the dirt and moss until they died. Animals would inevitably carry even the bones away, but it wasn’t uncommon to find a pair of picked-clean femurs sticking out of the muck, likely still in their boots.

It was no surprise that, when the booze had lulled me to sleep, I dreamed of severed legs.

Fawn and I woke up closer to the witch’s house than we expected, a good twenty paces from where we’d fallen asleep, without a single other person in sight. Perhaps I had passed the test after all. Perhaps this was the witch’s welcome.

There were dewdrops in Fawn’s hair, settled in the crosshatch of her braided crown and the tight little coils of baby hairs that framed her face. Though we were both days away from our last baths, tired and achy from sleeping on the ground, and I had a headache forming in my right temple, I paused to notice how striking she was. I wanted to brush away the diamond droplets, feel them against my fingertips. I wanted so many things for her; of her. She turned away, eyes drawn to the witch’s house.

It wasn’t a house, really. That was the first thing you noticed. There was a house under there somewhere, its cedar-shingled roof rising out of the living mass, but on the outside it was all gnarled roots and ivy and hanging moss. There were shadows that the eye wanted to skim over, wrongness in the curve of a branch or a swirl of bark.

“Two today,” said a voice like bones being ground together. I caught a glimpse of a dark eye through a crack in the rotting wooden door. “Lucky me.”

The door swung open, revealing a large room filled with coffee pots. Silver ones, glass ones, rustic clay, and even crystal. They were everywhere, stacked to the ceiling in teetering towers and piles. The bog witch crouched behind one of the mounds, and when I tried to get a better look at her, she made a sharp sound that startled me. Deep in the back of her throat, it might have been a cough, or a bark to keep me still.

“Pick one,” said the witch. I couldn’t see much of her face, but I was aware of fabric, swathes of it blanketing her, so it was impossible to tell the shape or size of her body.

“What?” Fawn’s voice was tiny and afraid. I touched her arm, and she shifted closer.

“I’ll go first,” I said. Fawn nodded gratefully, but she took my hand, following me on my circuit of the room. Many pots called to me, but the one I chose was yellow glazed ceramic, only the size of my fist and even lighter than it looked.

“You next,” grated the bog witch.

We walked the room again, and Fawn chose one. A green glass flask that looked more suited to brandy than coffee.

One hand appeared from the mass of fabric, brown and decorated with dark blue tattoos that confused the eye and made me dizzy. By the time my vision cleared, Fawn and I were seated on the hard earthen floor, waiting.

The scent of coffee filled the space, drifting in from some doorway obscured by piles of pots, and preceded the witch when she crept out to deliver two wooden cups. The pots were nowhere in sight.

“The price is a dream. Your deepest desire.”

An image rushed to the front of my mind, so vivid that it seemed real, pushing the hut, the witch, the bog all into the misty realm of dream. Fawn and I leaving the bog together, hand in hand, together from then on. Her laugh a constant, her smile bracketed by lines as we grew old together. My face was hot. Who would dare wish for something like that, when they barely knew someone?

“You first this time.” I didn’t want to admit that I wanted her dream to be something else. Someone else. That would be easier.

Tears gathered in her dark, hooded eyes. “A home.” Her voice was brittle, ready to shatter at the lightest pressure. “Somewhere I don’t have to wonder where I’ll be next. What’s yours?”

“To give a home,” I whispered. I couldn’t remember what dreams I’d had up until that point. “Don’t let me forget,” I said.

Fawn’s face grew soft. She took my face in her hands, callused from work, and kissed my forehead. “I won’t.”

We took our cups, clinked them together. The scent went to my head faster than whiskey fumes, the light roast bitter and syrupy. It coated my tongue with a light skim of oil, rich with fruit and sunlight. The chaos of the witch’s hut vanished for the space of seven tips of my cup, eight, and a smile shared with Fawn, before it closed in around us once more.

The witch took our empty cups, tipping mine into Fawn’s, and a stream of liquid flowed out as if I hadn’t taken a single sip. She poured the coffee back into my cup, darker this time, growing darker still every time it was passed between Fawn’s cup and mine. Fawn reached for my hand again, and I squeezed. I still knew my dream. Nothing had happened; something was happening; and I didn’t know which scared me worse.

After eight pours, the witch pulled off her hood, revealing an old Black woman with curly white hair and tired eyes as deep and dark as an ocean of coffee. She drank the contents of my cup, scarves falling from her shoulders as she tilted her head back. Memory drifted away in scraps as surely as the fabric sloughing from the witch’s form, the hair that fell from her scalp, the skin that peeled away to reveal my own face. My face, my body, my tattoos, my scars, my mind looking out from behind those eyes.

“Sorry it had to come to this,” I said. Which me spoke, I didn’t know, but I knew that I was the one Fawn let go to memory. 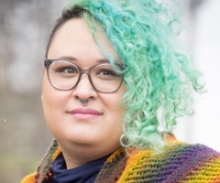 A.Z. Louise is a civil engineer-turned-writer of speculative things, whose conure keeps them company during the writing process. When not reading or writing, they can be found playing folk instruments, knitting, or weaving. Links to their work can be found at azlouise.com.