Skyscrapers That Twist to the Sun

Shaundra took the small, empty cardboard box and swiveled on her work stool to place it gently on top of her daughter Dineisha’s head. Her daughter went cross-eyed trying to look at it and started chewing on the corner of her thumb, smiling at the game.

“Okay.” Shaundra placed her hands on her knees and leaned forward to look her daughter in the face. “What’s supposed to be in the box?”

Dineisha tried a little longer to look at the top of her own head, giggled, and took the box down to read the label. “Thirty-four, no, three-quarter something nuts.”

Dineisha shrugged and gnawed at her thumb.

“I want to make sure that we know that just because we don’t say something with our words doesn’t mean we aren’t lying. Momma asked you where the three-quarter something nuts were. So if you know, you need to tell me.”

“I planted them,” Dineisha said around her thumb.

“You buried them? Why? I needed those to finish this engine!”

“I didn’t bury them. I planted them. I wanted to grow you a whole tree.”

Shaundra pulled the thumb from her daughter’s mouth. “It’s a different kind of nut, sweetie. Now I need to buy some new ones. Are you going to pay for them?”

“I’m sure they did,” Shaundra replied, beginning to turn back around to her worktable.

“You shouldn’t tell people they’re liars,” Dineisha admonished. She knew better than to raise her voice to her mother, so she had quickly acquired the skill of giving her softly spoken words a ringing tone of disapproval.

“Alright, you show me where to step.”

They left the garage hand-in-hand and went around the house to the backyard, which had not seen a lawn mower in a month. It was high, green, and studded with weeds, yellow blossoms and white puffs waving gently in the breeze. They looked so soft. Shaundra reached down to pluck one, for her daughter to blow a wish on, so they could wish for more “three-quarter-something nuts.” She saw her blood pulse bright onto the blossoms, felt the blades deep in her hand, long before she felt the pain.

Three minutes later, they were inside the house, doors locked, windows drawn, and Shaundra had a bandage on her cleanly sliced palm. Dineisha was hiding in her room; she had taken her mother’s yelp and cursing personally and clearly was attempting to lessen her expected punishment by punishing herself first.

Shaundra sat in the dark, thinking about the glint in the weeds in the noonday sun. The tiny spikes, twisting up, new shoots, pure silver. In a crystallized moment of horror, she thought she had seen them breathe.

Shaundra typed “plant metal” into her computer, and the search turned up a ton of metalwork artisan sites selling welded metal roses and gates and painted trellises. What could she search that would make sense? She stood up carefully and slipped over to the window, to look at the grass again. It glinted.

Shaundra carried her daughter to the garage; despite the walkway being paved, she wondered if she’d ever let her precious baby’s feet touch the ground again. Her mind remembered the spikes slicing into her hand as warm. It had to be the sun. Anything else it could possibly be made her stomach turn. Setting Dineisha down on the work stool, Shaundra looked all over the empty little cardboard box, and then carried it and her daughter back into the house.

The next few internet searches for Apex Tools turned up wares, distributors, money market information, and more artisans. But the website had a phone number on the bottom. There was a money-back guarantee for items that did not meet the customer’s expectations. It made Shaundra laugh to read that. She called, but after a few minutes of being shuttled around a bunch of different automatic messages, she hung up. Dineisha was playing quietly at her feet, a sure sign that she was still not sure how much trouble she was in. Shaundra bent down and kissed her on the top of the head. Then the phone rang.

“Good afternoon!” It was the voice of a young man. “You called Apex Tools support line. How can we help you?”

Shaundra hadn’t thought this far ahead. What could she say? Why did she feel like she was in trouble?

“Hello?” The voice on the line sounded a little frantic now. “Are you there? Did you call Apex? Is there a problem?”

Ah. There was no way to miss it; however uncomfortable Shaundra was feeling, this person felt worse. “Hi, yes. I called. I didn’t leave a number, though.”

“Our system logs the numbers of all incoming calls. How can I help you?”

“Who am I speaking with?”

Shaundra waited for the voice to answer. Four beats, five. “My name’s Jack. How can I help you?”

Shaundra nearly hung up. “Who is this really?”

“Is there something wrong with one of your tools?”

“And what if there was?”

“Then I want to make it right. I’m so sorry. Can you tell me which product it was?”

Something in Shaundra unclenched a little, and she read the number on the box.

The voice sounded relieved, too. “Okay, good. So far, that’s the only batch.” Nervous laughter. “Thank you, thank you so much for calling.”

“I was . . . I was working on a project. For a scholarship. An eco-friendly building material. I was working over the summer with my uncle, and I took some stuff home to use, because I couldn’t afford the materials, and he found out and took it all back to the plant and fired me. But . . . some of the stuff worked. And he accidentally mixed it in with the regular stuff . . . ”

Shaundra sat back in on the couch, looking at her stinging, bandaged palm. “That’s pretty impressive.”

“How fast did it grow? Is it spreading? Can you send me a soil sample? How tall did it get? Did you water it? Any fertilizer?”

“I don’t know any of that stuff, just that it shredded my hand,” Shaundra interrupted him.

There was silence between them. Dineisha looked up from her dolls, eyes wide in the way that they got when they were absorbing everything that was happening around her. Shaundra noticed the little gold hoops in her ears. Five minutes before, and she might have been unnerved at the sight of them. “Okay, Jack. What do we do next?”

Half an hour later, Shaundra’s new friend Jack had hung up, and she was out in the backyard, looking at the silver glints in her tall green grass. There was only a patch of it. Sometime in the next week, a special package would arrive, return postage paid, in which Shaundra would mail a few planter pots containing every blade of the “specimens.” When Jack offered to keep her apprised of his progress with the project, she didn’t turn him down. After they had warmed to each other, Jack had painted her a picture of living skyscrapers that twisted gently to face the sun, that created organically shaped working and living spaces, kept cool in the summer and warm in the winter. Metal items grown in molds instead of forged. Less stress on the environment, less energy burned. Kids were always coming up with such beautiful ideas. Shaundra wondered what age caused you to see the other side of it all. At what age did all the fearlessness go away?

Dineisha watched as Shaundra come back into the house, thumb in her mouth. “Is it okay?”

“Yeah, babe.” Shaundra looked at the wall, on the other side of which sat her workshop, and the latest engine she was working on. Could it get wet? Would it sprout? She’d already used a few of the screws on it. Did metal infect metal? She decided to send it to Jack, too. However miraculous it all was, she wanted it out of her hair. “Just no more planting stuff without asking me first, okay?”

“I don’t know, bunny, but as soon as I find out, I will let you know. Time for your bath.”

Shaundra sent Dineisha to go pick out her pajamas, thinking about this kid who called himself Jack, his brilliant invention, his dreams, the miracles that children could create. Dineisha had always shown interest in Shaundra’s repair work and liked to read the labels and sizes on her tools and organize her drawers. Maybe she could grow up to be some sort of organic engineer? Is that what they would call it? She pushed the images of war and torturous capitalist industry to the back of her mind and ran Dineisha’s bath, choosing to picture sentient ships swimming gracefully among the whales, eating all the trash in the oceans.

Dineisha opened the bathroom door and stomped in, tossing her PJs onto the counter, her top falling into the sink. She started to pull off her sweater, paused, turned to the door, and said “Thank you, Mr. Doorknob.”

Shaundra paused as well, biting her cuticles as she twisted the shining taps to cease the running of the water. 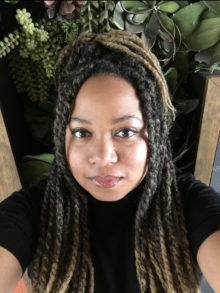 Erin Brown is a black, neurodivergent author of horror, fabulist, and fantasy short fiction and poetry. She has been published in FIYAH Magazine, the Los Suelos CA Interactive Anthology, and 3Elements Literary Revue, the anthology It Was All a Dream: An Anthology of Bad Horror Tropes Done Right, as well as other publications. Erin is a Voodoonauts Fellow and an SFWA member, and she was the recipient of the Truman Capote Literary Trust Scholarship in Creative Writing for Spring 2022. She can often be found at ebrownwrites.com, or on Twitter @babblebrown.