Baron Samedi pounds the drums and the whole floor shakes. That’s his thing, earthquakes. I heard the Skull Suckers played Santa Monica and the Baron literally brought the whole place down during a blistering solo of “The Devil May Ride.”

Then Lady Death comes in with a face-melting “NEEDLY NEEDLY NEEEEEEEEEEEEEEE!” on her axe, and skeletons—that’s her thing, she commands literal fucking skeletons, how metal is that?—lift up the platform she’s standing on and carry her around the stage.

Just in terms of raw power, the Skull Suckers could probably take over the world or something. We’re talking military grade power. Probably that’s what their parents wanted them to do, but they said, “Fuck that noise, we gotta shred,” and here we are.

Lady Death starts a shriek over the top of the screaming guitar and I pump my spiked wrist guards in the air. It’s so metal that for a minute I forget where I am and accidentally do my thing.

It’s a little one, but the whole room is black leather and death, so it stands out like a pentagram in a church service. I wince and brace myself for a fight, but nobody around me even looks up.

After the show, two of Lady Death’s skeletons stop in front of me and one points at the middle of the pentagram on my Skull Suckers tour tee-shirt. My heart tries to seize up, but the envious stares of the crowd allow me to keep it cool as I follow the skeletons backstage.

It’s just like you imagine. People are hooking up in every corner, people getting wasted. The Baron is drinking beer out of a literal skull.

Finally, the skeletons march me up to Lady Death herself.

Oh shit. I panic. Shit, shit, shit, I am never going to be allowed at a metal event ever again, much less a Skull Suckers concert.

I figure I’ve got a few choices here. I could refuse Lady Death, which really isn’t a choice at all. Or I could make fun of myself—when your thing is rainbows, believe me, you’ve heard every dig, put down, and burn there is.

Fuck it. I go for it. Full prismatic spray behind me, like a peacock tail, colors as intense as I can make them. Green straight over my head, tongue out, red and purple to the sides, my hands up in devil horns at yellow and blue.

Everything in the room goes dead silent.

“That is so. fucking. metal.” says Lady Death.

I think about sitting in my parents’ parlor, my private tutor Ms. Bell watching like a hawk as I play through Beethoven’s Piano Concerto Number Three.

“Maybe you’ll make the stage with us,” she says, and she smiles.

I walk away on a cloud of indigo and violet so intense, Satan himself could use it to line his cape. Nobody expects a prep school kid from the suburbs to be metal. Nobody expects a rainbow-throwing keyboardist in a metal band.

Metal is as metal does. 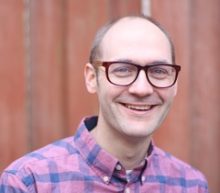 Shane Halbach is a writer and blogger living in Chicago with his wife and three kids, where he writes software by day and avoids writing stories by night. His fiction has appeared in Analog, PodCastle, and The Year’s Best YA Speculative Fiction, among others. He blogs regularly at shanehalbach.com, or can be found on Twitter @shanehalbach.