“You’d have thought it’d be the musk, or the way he could rend me limb from limb at any moment,” said Carla thoughtfully, “but honestly it was the hairballs. You haven’t known gross until you step in a tiger hairball.”

They all contemplated that for too long. Steph took a deep drink of her mimosa.

They were startled by a loud honk outside but recovered quickly. “You are better off without him,” said Leslie forcefully, peeling the wrapper off her blueberry lemon muffin with quick, decisive strokes. “So, so much better. And at least they’re mostly crap at prenups.”

“Such crap at prenups,” agreed Steph. “Jeff might have been an actual wolf, but he wasn’t the kind lawyers warn you about. You know what he used to do? He would sniff all my friends.”

“Thank God, no. But still. He would smell them. And I was like, Jeff, come on, rude, and he claimed he couldn’t help it.”

“If he didn’t do it while you were dating, he could help it,” said Leslie. “He did it to me once. It was creepy, I agree. For me it was—I mean, you know I love family.”

They all made noises of agreement, punctuated by another loud honk outside Rachel’s apartment. “Ignore that,” said Rachel. “No one loves family more than you do, Les.”

“Well, actually, Brett did. We couldn’t go anywhere without his entire family, and the minute one of them wanted to leave, we all had to leave. Like, come on, Aunt Julia, I have not even finished my appetizer yet! I know you’re starlings, but can we…maybe decide on our own when we’re done here? Just once? But no. It was all or nothing. I just…needed to be the lead bird in my own life.”

“So fair,” said Rachel fervently. An entire spate of honking. Rachel passed the fruit plate around.

“Oh, she didn’t want to come because she and Doug are still together,” said Rachel.

Steph waved her mimosa dismissively. “That’s silly, she’s still our friend. Even if I don’t get it. Doesn’t it bother her that he just….”

“Estivates,” said Leslie precisely. “He doesn’t actually go into hibernation, he’s just in a sort of torpor all winter.”

“Yeah, but so’s the rest of her family, even though they’re not were-bears, so it sort of works out. Sylvia says she gets a lot of reading done. She promised she’d come out to the club with us, she just wanted us to have our time without feeling awkward that things are working for them.”

“She’s such a sweetheart—what is that noise?” Carla went to the window and glared out it. “It’s a Canada goo—oh, God, Rachel, tell me it isn’t.”

Rachel stared at the carpet.

“Why did you tell him where you lived?” asked Steph.

“I didn’t, but he’s got really good sense of direction, and he just followed me, and—”

“He says they mate for life,” said Rachel miserably.

“Yeah, that’s what a court decree is for, Frank, you asshole,” Carla yelled out the window.

“Does he do this all the time?” asked Steph. Rachel nodded.

Leslie said, “Oh hell no he doesn’t.” The others marveled to see that a manicure that elaborate could press buttons on a cell phone that fast.

“Don’t bother,” said Rachel in a tiny, defeated voice. “I’ve tried getting a court order, but you can’t get a court order against a Canada goose.”

“Out there all Lloyd Dobler in your business—hello, Animal Control?” said Leslie.

All four women watched Rachel’s ex-husband shift back into a naked man in the Animal Control employee’s truck. He grabbed the bars, glaring, in front of the startled employee’s eyes. “Let your boss sort it out,” Leslie called down.

Steph frowned thoughtfully. “He does kind of look like—”

They all pondered it. “You know,” said Carla, “just because we had some bad experiences….”

“There’s really something to be said for having some shifters on your side,” Steph agreed.

Leslie said, “And to know who else to have on speed dial. I’m going to have another mimosa.”

They went back to their brunch. 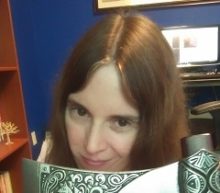 Marissa Lingen writes quite a lot of science fiction and fantasy. These days she writes essays and poetry too. She lives in the Minneapolis area with her family and two pets: a tiny dog and an ever-growing to-do list.