After years of roommates and sublets and shared bathrooms, other people’s beard trimmings in the sink and other people’s leftovers leaking a brown film into the refrigerator, Jude moved into a walnut shell. She went in feet first, arms locked overhead in a butterfly stroke, letting all the air out of her chest in one long exhale like a spelunker.

Inside, it was snug. Cozy. It didn’t have laundry or parking or a proper kitchen, only a hotplate on a fold-down shelf, but Jude liked the warm brown curve of the walls, the way they met overhead like the nave of a chapel. She liked that there was only room for a few things, so everything in her walnut shell was the best of its kind: a rattan bed with a blush silk coverlet, tangerines in a silver bowl, a scrap of Persian rug in faded reds and golds, a single bone-white plate. There weren’t any windows, of course, so she hung a private galaxy of string lights, which she started to like better than the stars outside, since these were hers alone. She liked that she could reach everything in her room from her bed, that she could see all of her beautiful things together wherever she was. She was happy there.

Five days a week, Jude wrote marketing copy for a company that sold discounts on wine tastings and cardio strip classes and microdermabrasion. She learned to do a lot with a little space. An email subject heading was like a haiku, concise and arresting: “Don’t Sleep on These Mattress Deals!” “Eyes on the Prize! Half off Lasik Surgery!” “New Year, Less You! 80% Off Cryotherapy Body Sculpting!” People spent their money differently now, the company asserted. People wanted experiences, not things. It was all about investing in yourself. It wasn’t a bad job, and once a month there was a sheet cake for everyone’s birthday.

But after a while, it started to be too much. There were too many emails, and too many deals, and everyone started filtering their subscriptions. A perfect subject heading didn’t matter if it was shunted to the spam folder. Jude’s position was “redefined.”

An artisanal coffee bar opened near her walnut shell.

“You could ask for more,” her coworker said, over undressed salads in the wan fluorescent light of the break room. Jude grimaced.

“I don’t need more,” she said. “It’s a trap. There’s always going to be people with more than you and people with less than you. Asking for more is what makes people unhappy.” She picked the tomatoes out of her salad with a plastic fork. “I have everything I need.”

So Jude moved into a hazelnut shell. She went in inch by inch, hitching and writhing like a hare being swallowed by a snake.

The hazelnut shell had no room for her bed, so she slept upright in a wingback chair covered in gold plush, loved bald like the Velveteen Rabbit. At night she wrapped herself in a gray cashmere blanket with a deep fringe, and in the morning a cream linen robe with a red sash. She found the robe in a thrift shop, which went to show how little people understood about beautiful things.

There wasn’t room in the hazelnut shell for her books or photographs, but she had a good memory and a library card. It was a relief, she decided, to leave the rattan bed and the galaxy lights, which in the end were not very important. Jude liked the way the hazelnut shell walls were slightly furred, the way she could curl up in her velvet chair and touch them on either side. She decided to be happy there.

But after a while, it too started to be too much. Her new position was freelance and paid by the word. Her hazelnut shell developed an aphid infestation, and the landlord stopped answering her texts.

“Why don’t you move back home?” her mother asked over the phone. “It’s just getting impossible to live there. I can clean out your old bedroom. I’ll put the Beanie Babies on eBay. Can you help me with that?”

So Jude moved into a cherry stone, the creamy exterior walls still sticky with red pulp. She went in like the last of the bathwater, like the scented foam circling the drain.

There wasn’t room for anything inside the cherry stone except herself. But she had always liked beautiful things, so Jude scoured her skin with almond oil and sugar, buffed her nails to a hard quartz pink, and parted her hair pin-straight down the middle. Happiness was mostly a matter of perspective. If she wasn’t happy, she had only herself to blame. “I am enough,” she reminded herself. “Take care of the good things you have.”

First Jude shaved the short, crisp hairs from her legs and forearms, plucked the down from her upper lip, from her temples, from the tops of her toes. Then she ran her hands over her face, found her brows, and pulled them out with her fingernails, one by one.

Her eyelashes came next, those little scimitars with cutting edges she could not stop feeling. Every day she ran her fingers over her scalp and found rough patches, and over time she rubbed them smooth. The more she shed, the larger she seemed. By the time she was hairless as an infant, she was even closer to the curved ivory walls of the cherry stone around her.

When the company finally went under, Jude didn’t really mind. She told herself it was an opportunity to focus on simple living, on really paring down.

“A person can live on a dollar a day,” she told her mother. “If I had a garden, I could grow my own beans.”

“You don’t have a garden,” her mother said. “You don’t even have a windowsill. Why don’t you come home?”

She didn’t have any reason to go out now, so she didn’t. It was dark and warm and peaceful in her cherry stone. She could hear herself think there. Jude ran her hands over her body and thought about what was important. She had had her appendix removed when she was ten, her wisdom teeth out in college. What didn’t help you could only hurt you. What else could she do without?

She reached down her throat and drew out a kidney, red and warm and slippery. With clean living, a person didn’t need both kidneys.

“Have nothing in your house that you don’t know to be useful or believe to be beautiful,” she quoted to herself. She had never wanted children, so she reached down her throat and hooked her uterus out like a fish splayed across her fingers.

Next, her spleen. It was just a bloated puce grub in her hand, but no amount of space was too small to reclaim.

Her lungs? She was used to so little air now. She reached in with both hands, dug her manicured nails into the spongy pink mass, and dragged one up through her throat.

Her intestines came next, wound hand over hand like fibrous, bloody yarn. She felt better already, clearing out so much dead weight. Seen all together like this, it was so clearly not beautiful, so obviously nothing that she wanted. The viscera made a damp armload, and she hesitated a minute, reading and re-reading the diagrams, before depositing it into the green “organic waste” dumpster.

Her heart she wasn’t sure about—of course people, generally, found hearts useful, but did she? Looking at it in her hand, purple and veined like a skinned animal, she decided it did not spark joy.

One day, a couple came to rent the cherry stone. Jude’s landlord had pinned a notice on the exterior wall, but she had not been outside to see it. The couple went in like paper dolls, hand in hand; they went down like pills swallowed dry. The woman’s heels left bloody divots in Jude’s tongue, the hem of her cream linen wrap dress tickled down the ladder of Jude’s esophagus.

“I like the exposed ribs,” the woman said. “Architectural.” 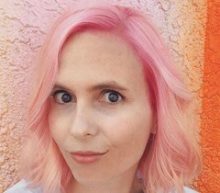 Kristiana Willsey is a writer and an academic who lives in Los Angeles. She is a 2019 graduate of Clarion West, and has previously published in The Toast and Toasted Cake, in addition to scholarly articles and book chapters. She has a PhD in Folklore and teaches at the University of Southern California.