To My (Final) Girl

You wanted to buy the house. Could you at least admit that? You looked at the dark wooden floors and the bay windows, and you said, “This is the one.” You didn’t mind at all that our neighbors refused to approach the property, would only wave from across the street as they jogged by. It didn’t even slow you down when our agent got around to disclosing what had happened in the house before we lived there. That has nothing to do with us, you said.

When I started to hear whispers, you said it was the wind. When I got out of bed after midnight and saw the face in the curtain, you said it was a shadow. And when a small, cold hand reached out from behind the curtains of the window by the staircase, grabbed my ankle, and sent me tumbling halfway to the ground floor—well, by then it was already too late.

Sure, Dr. Hausman told us we could conduct an exorcism. I still don’t know how he found the “Poltergeiste Almanack” in the research library of Cal Poly San Luis Obispo. But he gave us the ritual. It’s useless, I think in retrospect, to try and figure out why it didn’t work. Maybe it was because I was too scared to focus. Maybe it was because you didn’t really care, at that point, whether we lived or died. Or maybe it didn’t matter how much of the saltpeter and the ox tallow and all the other stuff we carefully measured out; maybe the damned thing never stood a chance of working in the first place. The fact remains, the children rose from the curtains and, while you fled, disemboweled me in impassioned, if slightly misdirected, retaliation for their own murders, and I died. Again.

I imagine you’ll protest that it isn’t always that bad. But you have to admit by now that it happens kind-of a lot, don’t you? Remember our “little stay” in that village near Calaveras? Even you hesitated before going to the harvest festival. Or the weekend at the New You Resort? I told you they weren’t giving us those extra bath salts to be nice.

And Dr. Hausman is never any real help. Maybe, before the phone inevitably stops working, he’ll tell us something about Chichimecan human sacrifice or a string of missing persons. But somehow, we always wake up hogtied on top of a pile of flowers and sweet herbs, or strapped to massage tables.

At least at New You they didn’t actually kill us. They even anaesthetized us before giving us the lobotomies.

And yet every few months, it seems, with that room-spanning smile crinkling the skin around your ridiculously deep brown eyes, you come to me with new ideas for trips we can take together, because you know—you know—that I would go anywhere with you.

This morning, when you told me you’d had a dream that you were waiting for a monster to show up at your house, and I told you about my dream where I was stuck in a haunted house and there was one particular room I had to avoid at all costs, it just got to be too much for me. I know what our dreams meant, Connie. They meant we can’t do this anymore.

That’s why, when you said, “I just saw an ad for this really cheap cabin we can rent in the woods near Humboldt,” I said something like, “How about we stay where we are for five fucking seconds?”

And you got up from the table and put your oatmeal in the sink, and said, “Well, you can stay right here,” and you turned to go, and I said, “Connie—” and you said “Tom,” in a way that indicated it might be the last time you’d ever say my name, and you walked out, though I think I heard you mutter one last “Condescending prick” before the door closed, leaving me here, and I’ve been writing this ever since.

I’m just tired, is all. I’m tired of fighting vengeful spirits and ancient monsters and other weird shit that we have absolutely no chance against. I’m tired of dying first. I’m tired of waking up the next morning, as if none of it had happened, and starting it all over again. And I’m tired of talking to Dr. Hausman. All he ever does is tell us what we already know.

But I still want you to come back. I keep thinking about the summer we first started dating. When we held each other behind the ferns at Camp Blackwood, when the man with the axe and the sheet on his head got so close to discovering us that we could feel his breath—there hasn’t been a day since then I haven’t wanted to hold you like that.

So if you don’t want to talk about how much I want kids, or how my career still hasn’t exactly blossomed, or, indeed, how it seems we can talk about less and less as time goes on, as more and more topics become triggers that set off something else—how sometimes, when it’s quiet for too long, I start to wonder if there are parts of both of us that are not welcome here—if you would rather go to as many terrifying places as possible, so we never have to look one another in the eye—well. Maybe I can understand that. Maybe you’ve always known what I’ve long been unwilling to acknowledge: all the awful things in the world could be worth it, if they push us together. What we should fear most are the quieter things that could break us apart.

It’s quiet right now, in the kitchen. And you know what? I’m afraid.

Maybe you’ll come back and we’ll finally have that conversation. Maybe you won’t come back at all. But right now, I’d give anything for you to come back and give me the chance to say yes to that suspiciously cheap cabin in the woods.

Let’s take on another nightmare, Connie. Let’s make sure that all we can think about is fighting to stay alive. Let’s do it. Let’s go. 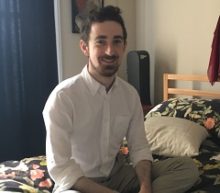 Dustin Katz has lived in the San Francisco Bay Area all his life. One of his short stories previously appeared in the Lost Films anthology from Perpetual Motion Machine Publishing. You can find him on Twitter @DustinKatz.