“A silver swan, which had a living grace”: A Brief, Bizarre Collection of Historical Automatons

In 1867, the World’s Fair was held in Paris, displaying every marvel that could ship to France. Mark Twain wrote of his experiences there in Innocents Abroad, and described John Joseph Merlin’s most famous creation:

I watched a silver swan, which had a living grace about his movements and a living intelligence in his eyes—watched him swimming about as comfortably and as unconcernedly as if he had been born in a morass instead of a jeweler’s shop…

In recent years, automatons have seen a surge in popularity, from steampunk contraptions to mecha. But this interest is hardly new: For centuries, humanity has turned its eye towards the application of ingenuity, physics, and aesthetics into largely-useless but awesome-looking recreations of the natural world. From swans to soldiers, owls to poets, the world is a sucker for mechanical wonders (or, sometimes, a half-decent hoax). Here’s a brief spotlight on some of history’s most marvelous automata.

Automata of the Classical World

These mechanical marvels didn’t begin as an overwhelming aesthetic statement. One of the earliest known Chinese machines was the South Pointing Chariot, a mechanism whose clay passenger served as a compass, in use by several centuries BC.

Many of ancient Greece’s automata were also taken as teaching tools or novelties rather than wonders (such as a water-operated toy in which Heracles strikes a dragon with a club). However, these early machines would be the basis for robots to come. Hero of Alexandria was a prolific inventor of practical mechanisms, and many of the technologies he developed would find their way into the silver swans of later generations.

In the mid-eighth century, The Caliph of Baghdad displayed wind-powered androids atop the gates of the palace. A century later (after commissioning a report on Hero of Alexandria’s techniques), the palace also boasted a golden tree on which mechanical birds flapped their wings. More sophisticated still was Abu Al-Jazari’s Peacock Fountain; when the tail was pulled, water poured into a basin, and the rising water levered a servant statue to offer soap and a towel. Though it used a flush mechanism, the piece was more beautiful than useful—a trend that would continue as technology caught up with imagination.

It’s no surprise that Leonardo Da Vinci, in between inventing the helicopter and taking ten minute naps, took his turn designing some beautiful machines. He developed a humanoid automaton around 1495; there’s no evidence the mechanism (designed to be housed in a suit of armor) was ever built, though when it was reconstructed in the twentieth century, it worked. Perhaps lesser known are his mechanical lions. One he built in 1515 to welcome Francois I to Lyon; it walked forward to greet the king, and when stroked, revealed a fleur-de-lis in its chest. He premiered another in 1517 (showoff), which could also wag its tail and shake its head.

As improvements in technology allowed for more mechanical complexity, there was increasing interest worldwide in making the mechanical an aesthetic achievement, rather than a simply functional one. By the eighteenth century, several inventors had made an art of artifice.

The Eighteenth Century: The Gilded Age 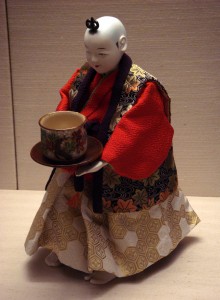 Across several cultures, the eighteenth century gave rise to the desire to imbue automatons with the illusion of inner life. One of the best examples of this aesthetic is Japan’s karakuri ningyō. Emergent in the seventeenth century, these small-scale androids were commonplace by the eighteenth. Zashiki karakuri, the most common, were household luxuries; emphasizing lifelike grace, zashiki karakuri were designed to perform a single task, such as walking a cup of tea across the table to a guest. The idea of evocative mech didn’t stop there; puppet-based dashi karakuri shows and clockwork-enhanced butai karakuri theatre troupes were all the rage.

In Europe, a different aesthetic reigned supreme. Merlin’s Silver Swan, built in the mid-eighteenth century, was a prime example of the European automata of its age: crafted in detail from precious metal, with intricate mechanics that allowed it to perform a particular simulacrum of nature. Notably, it served no practical function; it did not pretend to be anything other than proof of its maker’s ingenuity.

As it happens, the swan’s first owner was James Cox, himself a master of the art. He’s responsible for the Peacock Clock, a gift to Catherine the Great. The enormous clock featured a life-size peacock perched in a miniature oak tree, surrounded by birds and animals crafted in precious metal. When the clock struck, an owl inside a silver cage turned his head as bells on the cage spun and chimed; a rooster lifted his head and crowed, and the peacock lifted and spread the individual feathers of his tail.

The movements of the James Cox Peacock Clock (say it three times fast) were more delicate and naturalistic than the swan that preceded it by only a few years. When this attention to detail and mechanical capacity was applied for other purposes, the results could be impressive.

One of the most startling finds of this type is Henri Maillardet’s Draughtsman. This eighteenth-century invention was discovered in the twentieth and reassembled in an attempt to puzzle out its creator. When put into motion, the human figure put pen to paper, but instead of merely mimicking the motions, the Draughtsman’s mechanical memory produced four drawings and three poems. One of these poems was signed “Written by the Automaton of Maillardet,” which neatly wrapped up that little whodunit. That particular serendipity notwithstanding, this android’s remarkable achievements showed a heretofore unseen level of complexity.

With articulated peacocks and automated draughtsmen coming down the pike, it seemed the next great step for man would be a machine that went beyond mimicry. The world wanted a machine that truly mimicked nature—or, even better, thought for itself.

The Hoaxes: Too Good to be True

Two of the most famous automata of the eighteenth century claimed to have accomplished the goal of being more real than real. The Digesting Duck seemed to have equaled Nature in its ability to process and digest food, and the Mechanical Turk was a chess-playing installation that purported to be, at last, the automaton that could reason.

They both sounded too good to be true. 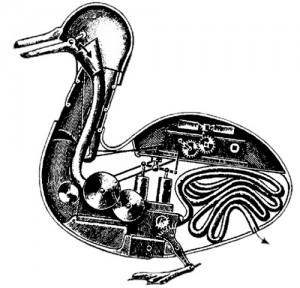 Le Canard Digérateur, built by Jacques de Vaucanson, was a duck of excruciating detail, with over 400 wing feathers. Vaucanson claimed the duck was as faithful internally. And indeed, the duck was able to eat grain; the explanation given was that within the duck (a complicated mechanism into which perforated sides allowed but a glimpse) the grain was metabolized; shortly after eating, the duck defecated. When first displayed, it caused a sensation. It was only later that a disenchanted public learned the truth: The duck had two separate compartments, one at the base of the throat to catch the grain, and one into which the unimaginably devoted Vaucanson had pre-packed feces.

Less visceral, but no less ingenious, was the Turk. First displayed in the late eighteenth century, the Turk was a life-size male torso atop a large cabinet. The cabinet doors could be opened, revealing mechanisms within, and the machine demonstrated skill with chess, winning several games against human opponents, including Napoleon. Its fame quickly grew—along with speculation that it might be a hoax (the downside of following a pooping duck into the public eye). The skeptics were right, though it took several decades to crack. It was admirably complex: A player sat inside the cabinet on a rolling platform out of sight of any opening doors, and played by monitoring the game via magnetized strings under each piece, and operating the puppet’s arms to manipulate the board.

The Turk would be the last of the great mech hoaxes; the Industrial Revolution in Europe would turn benchmarks of technological progress from the fanciful to the useful (covering a spectrum that included manufacturing equipment and the Lovelace/Babbage Analytical Engine), and personal mechanical whimsies in nineteenth-century European homes would decrease in scope to music boxes and children’s toys that, while they pleased, would cease to startle.

The automatons of the nineteenth century were no longer more astonishing than the machines of industry. Their value lay in their meaning, not in their making, and would be used for different purposes—like diplomacy.

One of the most remarkable automatons of the nineteenth century was Alamet. In 1889, a Japanese diplomatic contingent visited Istanbul; as part of the subsequent information and gift exchange, Sultan Abdulhamid Han commissioned a clock that would both demonstrate technical prowess and serve as a cultural insight.

The result was Alamet (“miracle” or “medal”), a clock encased in a life-size gold and silver replica of a whirling dervish; once an hour, he spun and opened his arms, and a built-in phonograph played a recording of azān (the call to prayer).

This automaton, one of the first designed as an expressly cross-culture product, was as much a marker of its time as the silver swan. In the nineteenth century the world was shrinking, as exploration both academic and colonialist brought cultures into close contact. The circumstances that led to Alamet’s design were a prime example of the pressures of globalization: the ability to condense one’s own culture for experience by others, both in an educational capacity and a bid to seem formidable to outsiders. Though largely forgotten in later narratives, Alamet stands as a fascinating snapshot of a world that was rapidly changing.

The Twentieth Century and Beyond: What Now?

The twentieth century saw technological leaps so quick and so vast that machines no longer developed over centuries, but decades. The automata of the twentieth century tended to be designed along one of two cultural touchstones: aesthetic nostalgia, or the increasing drive (in an echo of the eighteenth century) for man to replicate true consciousness.

The former took shape with Japan’s Gakutensoku, a robot constructed in the 1920s that was technically complex, but whose significance lay in the design of his face (which could change expressions) and the symbolic nature of the lamp he carried; when the lamp was turned on, Gakutensoku began to write poetry with the pen he held in his other hand.

The drive toward artificial consciousness would occupy much of the robotics field of the twentieth century, but an early marker was the 1938 Deco-tastic robot Elektro—a humanoid robot whose photoelectric eyes could distinguish red light from green, and who could walk via voice command. (He was also a champion smoker.)

The field of robotics continues to make great leaps in the development of mechanics that mimic nature—from the robot-dog toy craze to the artificial heart to Honda’s most recent androids, the future of automatons is bright.

Fittingly, Elektro made his public debut at the 1939 New York World’s Fair, a temple of technology at which automata of Elektro’s kind were more than welcome. Seventy years earlier, after all, the same feeling of wonder had been conjured when Mark Twain visited the World’s Fair in Paris, and had marveled at another example, itself already a century old, of mankind’s attempt to reconstruct the world, one silver bird at a time.

Genevieve Valentine’s first novel, Mechanique: a Tale of the Circus Tresaulti, was recently published by Prime Books. Her short fiction has appeared in or is forthcoming from magazines such as Lightspeed, Fantasy Magazine, Clarkesworld, Strange Horizons, and Escape Pod, and in many anthologies, including Armored, Under the Moons of Mars, Running with the Pack, The Living Dead 2, The Way of the Wizard, Federations, Teeth, and The Mad Scientist’s Guide to World Domination, among others. Her story “Light on the Water” was a finalist for the World Fantasy Award. Her appetite for bad movies is insatiable, a tragedy she tracks on her blog at genevievevalentine.com.