In this week’s Author Spotlight, we asked author Alaya Dawn Johnson to tell us a bit about the background of her story for Fantasy, “A Prince of Thirteen Days.” 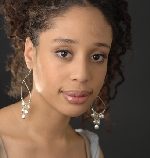 Bordertown is a shared fantasy setting for a collective of authors. How did you become involved with Bordertown?

Well, the simple answer is that they asked me. I was floored and honored and delighted to be asked to join the group of writers whose works I’d grown up reading, so of course I said yes. Then came the tricky part of orienting myself in Bordertown after a gap of many years and finding my own place in its borders.

What challenges appeared when writing within this shared world? For example, did preserving continuity with other stories in this setting pose a problem? If there were challenges, how did you overcome them?

Since my story only references characters from the other stories and novels, I didn’t have much trouble dealing with conflicting storylines. However, as is inevitable in a shared-world with a wealth of stories and an imperfect memory from high school and college, I had some wrong impressions of the physical layout of the city (thinking Fare-You-Well Park was much closer to SoHo, specifically) and some other more minor issues that I needed to work out in revisions. Having the actual creator of the world, along with the original writers, able to help and advise about how to orient the story I wanted to tell was invaluable.

What inspired “A Prince of Thirteen Days?”

One of the things I love about the Bordertown setting is both the fickleness and possibility of magic. The fact that it works sometimes—producing wonders or disasters or nothing at all—is exactly the sort of stuff that makes storytelling and writing work, as far as I’m concerned. So I wanted to tell a coming-of-age story, and I wanted to deal explicitly with the troubles of sexual awakening in a family where sex has caused its share of problems, and the whole thing sort of came together on a statue. I can’t honestly tell you why, except that it appealed both to my sense of absurdity and possibility. My imagination sparked on an incongruous centerpiece.

Why would the protagonist fall in love or grow infatuated with a statue in a city full of so many other potential mates of living flesh and blood?

Well, aside from the more authorly reasons cited above, Peya’s motivations are rooted in family history and a sort of imprinting. Anything deeper than that, I’ll have to let the reader surmise.

Do you intend to return to Bordertown as a setting for future stories?

I’d love to! But I suspect that depends more on the possibility of future volumes (fingers crossed). There’s so much I’d like to explore in the world, and I’m especially fond of Rabbit.

What’s next? Any upcoming publications you would like to announce for your fans?

The sequel to Moonshine, Speakeasy, is finished and is scheduled for publication in Winter 2012 (nothing more specific than that, as of yet). I also have a short story in the Summer issue of Subterranean, which is focused on YA speculative fiction.