In this Author Spotlight, we asked author Carrie Vaughn to tell us a bit about the background of her story for Fantasy Magazine, “A Hunter’s Ode To His Bait.” 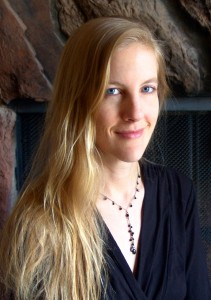 What inspired “A Hunter’s Ode To His Bait”?

The seed of the story came from a couple of places. First, this is one of a whole string of stories I wrote in which horrible things happen to horses. My own horse had been ill and I was doing some processing about it, but I didn’t know that until much later, when I realized I had written this string of stories … second, was the simple thought: What if a unicorn hunter and the virgin he’s using as bait fell in love? If they consummate the relationship, they lose their jobs and a potential fortune. I really did originally see this as a romance.

“A Hunter’s Ode To His Bait” has an infamous reputation for its treatment of unicorns. As the chieftain’s youngest son put it: Do you ever feel like you were betraying the unicorn? Did you anticipate such a visceral reaction from readers to the story when you were writing it?

Believe it or not, I really didn’t anticipate the vehemence of the reaction. Because I thought I was writing a love story. I wanted to tell the story of the relationship, and the unicorns were the obstacle to that relationship. I didn’t originally take into account the cultural baggage about unicorns that people would bring to the story, that the act of hunting unicorns would automatically make Duncan and Eleanor villains in people’s minds. I figured out what was going on pretty quickly once I got comments back from my critique group. My own feelings about unicorns were more neutral. We don’t explicitly see the unicorns as magical beings in the story (except that they disintegrate when their horns are removed)—we only have the characters’ words for it, and our own assumptions.

Following up on that question, why do you think unicorns are so highly regarded?

They’ve become symbols of everything magical and good. Traditionally, they were symbols of purity—their horns were said to purify water, neutralize poisons, and so on. Then there’s the whole virgin thing. All those specific medieval attributes have carried forward and become even more abstract. Unicorns are symbols of goodness because they’ve always been good and pure and awesome. Therefore, killing them is bad and horrible.

One of the things I wanted to make explicit in the story is how much of the unicorn’s symbolic purity was related to sexuality. All of its power is in its horn? I mean, come on! I also sexualized the unicorn—they’re attracted to virgins, virgins are defined in sexual terms, so what about that sexuality are unicorns attracted to? I wonder if that’s part of what bothers some people, that the unicorn at the end of the story is just as into Eleanor as Duncan is, and that isn’t how we think of unicorns. Also, the idea that Eleanor comes to embrace her role—and her sexuality—may be disturbing, when traditionally the virgin’s role in a unicorn hunt is passive.

Betrayal seems to be one of the themes of the story. Eleanor is sold off by her mother. Duncan uses her to lure unicorns. The chieftain’s son asks Eleanor if she feels like she was betraying them. When Duncan asks her the same question, she doesn’t have an answer. How much of our impressions of betrayal are colored by cultural perceptions of right and wrong? Do you think there are moral absolutes?

You have to constantly ask, what’s being betrayed: the unicorns themselves, or the medieval cultural ideal of them? If the latter, is that a bad thing? Is it betrayal or subversion? I once explained to someone the extreme responses I got to the story regarding the treatment of unicorns, and this person responded, “Doesn’t anyone get upset about the girl getting sold into slavery?” (I could add to that that the whole romance is suspect, a kind of Stockholm syndrome.  Eleanor has to be thinking about that sometimes.) And the answer is no, no one has ever explicitly expressed outrage about the opening of the story in which a young girl is sold by her mother. I think because that’s such a familiar trope in fantasy, many readers take it for granted. On the other hand, unicorns are a sacred cow of fantasy.  So, as far as moral absolutes—it’s whatever we’re used to, isn’t it? Is Eleanor a victim for being sold by her mother or a villain for her role in hunting the unicorns?

Part of the outrage isn’t that unicorns are slaughtered—it’s that there’s no retribution. Duncan gets away with it all. He wins, the unicorns lose. And Eleanor is ultimately happy to be on his side. There’s no punishment. But once again, if you look at this as a romance—the relationship has to win out at the end. Duncan may not be a good guy in the story—but the unicorns aren’t really, either.

You’re the author of numerous short stories, the Kitty books, and a number of other novels. How does the process of writing short fiction differ from writing novel-length fiction? What advice would you give to aspiring short-story writers?

It sounds obvious, but the scale of short stories is so much smaller. I’ll write an outline for a short story in one page, while a novel outline will be a dozen pages. A short story doesn’t leave any room for error. Additionally, there are short story ideas and novel ideas. Some ideas just won’t fit in a short story, and some ideas would be much better served by writing them in a short, punchy format. Over time, I’ve gotten better at separating them, and saving the sprawling ideas for novels and the punchy ones for short pieces.

My advice to short story writers is finish, and revise. Really look at the details, the theme, the structure of the story, the intangibles that kick a story from “competent” to “actually good.” Those are some of the hardest parts of writing to master, and short stories act like magnifying glasses for some of these issues. When they don’t work, it can be glaring. But because of that they’re very good practice as well.

What are your favorite short stories?

“Homecoming” by Ray Bradbury. “A Pool in the Desert” by Robin McKinley. “The Cambist and Lord Iron” by Daniel Abraham. And a bunch more, if you gave me a day to think about it.

My second young adult novel, Steel, about a junior fencer who ends up on an 18th century pirate ship, is out in March. After the Golden Age, my superhero novel, is due out in April. The next Kitty novel, Kitty’s Big Trouble, is due out in June. So yes, I’ve been very, very busy. I’ve been telling people, enjoy it while it lasts. I’m spending 2011 slowing down a bit and taking more time on the next couple of book projects.