In this week’s Author Spotlight, we asked author Cory Skerry to tell us a bit about the background of his story for Fantasy, “The World is Cruel, My Daughter.” 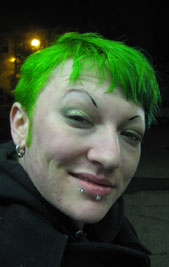 “The World is Cruel, My Daughter” presents the reader with a twisted version of the Rapunzel fairy tale. Where did the idea of this particular twist on this well-known fairy tale originate?

I’m an artist, so a lot of the time my stories start with an image that I’m not skilled enough to draw. In this case, I wondered what would happen if Rapunzel’s hair was alive, and worse, what if it didn’t like her very much? Even though the story took a very different direction once I started writing, I didn’t forget the picture in my mind of the ending.

Eyes are a recurring motif throughout the story. In the first section, the reader is presented with three pairs of eyes in a jar. “When my daughter was five, I loved her for her eyes,” says Rapunzel’s mother. Why was so much of the focus placed on eyes?

The version of Rapunzel I read as a child was the one in which the witch blinds the prince, so I’ve always associated this story with a tragic loss of vision. People who try and protect their children from the world by enforced ignorance strike me as blinding themselves in the most tragic of ways. I didn’t intentionally include the eyes, but I guess a strong theme squeezes the setting until all the relevant symbols bulge out.

To put it mildly, Rapunzel’s mother is a rather over-protective figure. She wants for Rapunzel to believe the outside world is full of hate and violence. Knowing only her mother’s warnings and world-view, why would Rapunzel ever want to venture outside?

I have a lot of answers for this question, but I think maybe the most important one is that if the world you experience through all five senses is only beauty, safety, and comfort, nothing anyone says will convince you that danger is real.

What, exactly, does the witch want with Rapunzel in your story? Why must beauty be stolen? As Rapunzel asks in the story: “But why? Why do something so terrible?”

Disney’s Tangled, which came out three years after I wrote this story, had a great answer for that question. In the movie, Rapunzel is a source of magic, so of course the witch wants to keep her. But we don’t live in Disneyland. We live in a terrifying place where crimes often make sense only in the perpetrator’s mind. I think the witch probably observed some behavior from Rapunzel’s parents that convinced her she would be a better guardian. (The scariest thing for me is that we don’t know what kind of people Rapunzel’s parents were, so the witch may have been correct.)

What’s next for Cory Skerry? Do you have any upcoming publications you would like to announce for your readers?

Short stories are the dessert I let myself have between novels, so alas, they don’t come often. However, you can always peek at my website to see what’s in the works.