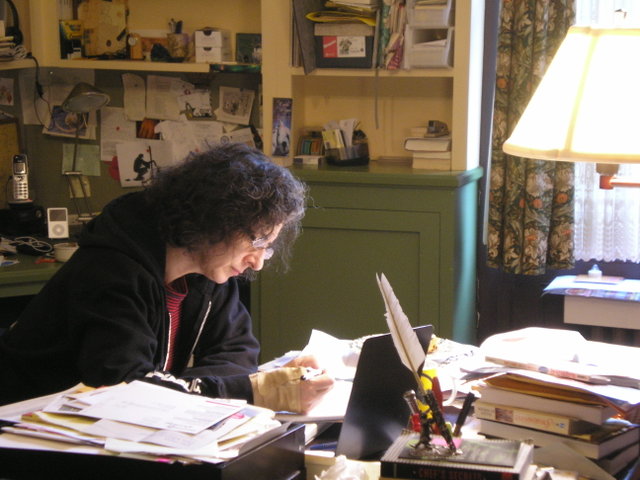 In this week’s Author Spotlight, we ask author Ellen Kushner to tell us a bit about her story for Fantasy, “The Swordsman Whose Name Was Not Death.”

“The Swordsman Whose Name Was Not Death” is set in the same world as your novels Swordspoint, The Fall of Kings, and The Privilege of the Sword. How did you develop this world? What inspired you?

I was inspired by a combination of books and real life. No, really. The world and the characters started coming to me in my early twenties. I was just out of college, working in publishing and living on a seedy block in an iffy neighborhood in New York City. (Those who know NYC now will laugh uproariously when I tell you it was W. 110th Street on the Upper West Side—but believe me, my block was so bad that we regularly heard cries for help out the window. It was a different city, then; trust me.) I definitely felt like I had to have my head up and my wits about me every time I went out. And I felt like I was really cool for having the street smarts to live there. But did I wish I had a tough guy with a sword who always made sure no one messed with me? Sure, I did.

Like Riverside, my neighborhood was chockablock with old apartments and brownstones, rich with fabulous architectural details that were falling to bits through neglect, and rented for next to nothing. Richard and Alec’s main room at Marie’s is my old living room, complete with flaking paint, chipped molding, rotted floorboards and a fireplace (though ours was blocked up).

At the same time, I’d just started working in publishing, and read Jane Austen and Georgette Heyer for the very first time. The formality of their worlds intrigued me; I wanted to play with that, because it was very alien to me—as was the formality of business bureaucracy, even in publishing. And I was finishing Dorothy Dunnett’s Lymond series then, too. Those books were a huge influence; again I got that sense of challenge, that sense of, “How did she do that?” Other influences on the Swordspoint setting include Shakespeare, Thackeray, Damon Runyon and James Thurber—but they were old friends, a big part of my mental furniture already.

Finally, I really love old cities, and I’ve been in more than a few. When I was a kid, we lived outside Paris for a year, and drove all over the place. When I got older, I had my adventures with a Eurail pass, checking out old back streets before Europe was quite as cleaned-up as it all is now. The feel of the stones, the smell of the plaster, the height of the old buildings (not very!) … all made their way into the place I invented.

The story draws its name from the book the girl carries. Alec makes the book sound like a fairly trashy romance novel. Is he right? Do you have a good idea what that book is really like and about?

I do, definitely! It’s the book we all loved in high school (or college), the one we weren’t sure we should admit to our friends we loved—until we found out they loved it, too. It’s the one with the trashy cover that turns out to be amazingly great. It’s the one you can’t really explain. We all have one; what’s yours?

In The Privilege of the Sword (“TPOTS”—and yes, I pronounce it “teapots”), which takes place some fifteen years after Swordspoint and is narrated by Alec’s teenage niece (the daughter of the very sister he mentions in this story)—all the teenage girls on the Hill read it [The Swordsman Whose Name Is Not Death] obsessively. One of them defends the book to her parents: “It’s not trash. It is full of great and noble truths of the heart. And swordfights.”

As in this story, some of the girls in TPOTS mediate some ugly events in their lives through The Swordsman Whose Name was Not Death; the fiction they love gives them a way to cope, even to survive.

In TPOTS, I do offer up some more snatches of scenes, characters, and even a few lines of The Book (The Swordsman Whose Name was Not Death, that is!). In fact, it even gets dramatized for the stage, and all the girls go, and argue about how true to the original it is, and bitch about their favorite bits being left out (sound familiar?).

So is Alec right? Well, he’s never read it … so he’ll never know.

Alec condemns his sister for not fleeing her arranged marriage, but he won’t do anything to help the girl, who is trying to escape the same fate. Why? (And how does she keep from punching him in the nose—he’s such a jerk!)

Well, he’s too tall for her to reach his nose—and anyway, he’s just not that important to her. He doesn’t matter to her; Richard does.

Alec is my terribly flawed, beloved character. He doesn’t try to help because he’s a mess. He’s full of rage he can’t direct at anything useful. He’s very young, you know; in this story, set around the time of Swordspoint, he’s not yet twenty. Check him out some fifteen years later in TPOTS—he’s learned a lot, even if he’s still pretty nuts. (And he and his sister have a slambang bashup fight about what happened to her—which I had to write in the novel, having set it up in this little story!)

In a way, this story was meant to be a commentary on Swordspoint. At the time, I was feeling uneasy about having written a book almost entirely concerned with men and the affairs of men (with a few surprising twists, sure, but still …). I wanted to write a story that overtly said: “Yes, I do know that this society I have lovingly invented is hard on women; and that these particularly characters, attractive as they may be, do not very much care about that.”

My best friend from college, the novelist Caroline Stevermer, once called Richard and Alec “Sunlit Villains.”

In American culture, we seem to have stereotypes about certain kinds of men who are extremely sexual, men like actors, models, even gay men. In this story, the sexual appeal and sexuality of swordsmen is played up. Were you drawing on or speaking to some of our preconceptions or stereotypes of men’s sexuality?

Hah. I hadn’t thought of it that way, but, yeah, I guess so. It’s something I set up in Swordspoint that everyone thinks of swordsmen as hot guys who just fight and screw a lot. Because in the society I’ve set up, swordsmen are a combination of professional athletes (think tennis champs crossed with quarterbacks) and performers—and my dear, you know what they say about actors!

What do you think happened to the girl when she walked out of Richard and Alec’s bedroom?

This particular story was the very first thing I wrote about Richard and Alec after I finished Swordspoint. And it didn’t happen right away. I had this Thing about not doing a Sequel (um, this was in the days when series were sort of looked down on—or so I believed. What can I say? I was young. And ambitious. And cocky). I didn’t want to get typecast, I guess—I wanted to show my range; so the next book I wrote was Thomas the Rhymer—very different. But then … I just kind of missed my city, and my mad, bad, boys. And I thought, “Hmm, there are some aspects of them all that I haven’t really explored yet.” So I made a pact with myself, that as long as I could come at the material from a different angle, even a different style, each time, I was allowed to write about them. And as I said above, I wanted to deal first with the issue of feminism (or lack of it) in my city, in this story.

I’ve kept my pact, too: There’s a complete list of “Riverside” stories and novels here, at the bottom of this page on my website.

And each of them is quite different from the others—while still, I hope, filling in the narrative of what happens to all these people and their city.

Are there any upcoming projects you’d like to mention or point out to our readers?

Yes, indeed! Because I [just recently recorded] the audiobook of Swordspoint! I’m working with producer/director Sue Zizza, who was also our director on “The Witches of Lublin.” It really is a dream come true: For years, I’ve been reading bits of the book aloud with great gusto to anyone who’d hold still for it. Audiences seem to like it, and often people come up to me afterwards and say, “Oh, my! Are you going to record that?” My standard answer has always been: “Oh, I’d love to—but I’m so disorganized—and lazy—but, you know, if a producer were to come up to me and say, ‘We’ve got a studio and an engineer, and here’s a microphone: Go!’ then I’d totally do it.”

Be careful what you wish for. Or rather, don’t! I’m loving it a lot, and can’t believe I’m really getting the chance to do a professional recording of this caliber of the entire book.

When will the Swordspoint audiobook be out? And who’s releasing it?

A perfectly-timed question:  I’m delighted to say that the audiobook [just launched]!  It’s coming out from a new label at Audible.com called “Neil Gaiman Presents,” in partnership with ACX.  Neil has picked a number of his favorite books, and it’s a thrill to be on his list with the likes of James Branch Cabell and Avram Davidson. And Sue has invited in some amazing actors to bring just a few of the scenes to life . . . I like to think it’s like someone is reading you a bedtime story, and all of a sudden you’re dreaming that’s it real, hearing all the voices, the carriage wheels . . . And then we go back to the reader (me).  It’s like nothing else that’s ever been done, and I hope you’ll like it.   It can be ordered here.