In this week’s Author Spotlight, we asked author Genevieve Valentine to tell us a bit about the background of her story for Fantasy, “Study, for Solo Piano.” 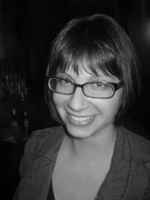 In Mechanique, several timelines, past and present, are explored (and sometimes seem to be unfolding in tandem as the past infects the present). In that way, “Study, for Solo Piano” takes place within the timeline of the novel; while it occurs before some of the pivotal events of Mechanique, it is a glimpse into the life of some of the Circus’s members in the years before the novel’s main narrative begins. (Which technically makes it a return to the world, that happens concurrently with the novel itself. Handy!)

Panadrome, the last piano player, has to choose between destroying what might be the world’s last piano or watching it be destroyed, between “a funeral or a butchering.” Presented with the same choice, what do you think you would do?

Stand rooted in place and make horrified faces until the mob shows up and dismembers me, I expect.

Panadrome’s question “If you can make something so beautiful, why would you ever stop?” captures the essence of the story. How much of that question is innocence? How much is hope for something better?

The world of Mechanique is an often-desolate landscape where long war has driven what’s left of humanity behind the walls of very small city-states. In the circuit made by the Circus Tresaulti, there are long stretches of nothingness punctuated by very insular and unfriendly places, and even if those places are briefly transformed by the arrival of the Circus, there’s no sense that the change is lasting.

I think Panadrome’s question isn’t born of any kind of innocence; it’s a combination of his attachment to beautiful and doomed things from his old life set against the bleakness of his current one, alongside the burgeoning realization that the world is being sapped of beauty, and that Boss might be one of the few people left who’s able to create it.

The Circus Tresaulti has trapeze artists, a music man, a strong man, and more. If you could run away and join the circus, which role would tempt you the most?

While I was writing Mechanique, I watched hundreds of hours of circus footage—both the shows themselves and whatever behind-the-scenes material I could get my hands on. The physical and mental focus required to succeed in the circus has my admiration forever, but I have to admit that even if I had the balance to be in the circus (I don’t), I have some pretty impressive stage fright that would probably preclude a career in the ring. However, if there’s an opening for an official Circus Curmudgeon, I’m totally up for the job.

You frequently review movies. In an ideal world, who would you cast for a film adaptation of “Study, for Solo Piano” or Mechanique?

This is a home question! Of course I’ve thought about it. However, getting too specific feels like putting the cart significantly before the horse, so I’m going to hold the names in reserve; then, in the unlikely event of a film adaptation, I can take all the credit for any inspired casting and put all the blame for unpopular casting on the casting director, who hopefully will never have seen this interview.

You’ve published dozens of short stories and now a novel. Before we conclude, do you have any advice for aspiring writers?