In this week’s Author Spotlight, we ask author Holly Phillips to tell us a bit about her story for Fantasy, “Virgin of the Sands.” 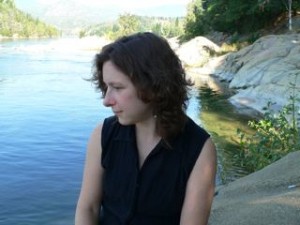 “Virgin of the Sands” is set in an alternate-Earth North African World War II campaign. What kinds of research did you do for this piece?

To be honest, most of my “research” probably came from reading novels and watching movies. Humphrey Bogart’s Sahara was a favorite when I was growing up, and I’ve read Olivia Manning’s wartime novels more than once. I’m also a big Alan Furst fan. I figure I can get away with fictional research, at least for a short story, since what I’m really aiming for is atmosphere.

The world of this story feels very full and well-developed, particularly the different magical systems. Do you have other works set in this universe?

When I’m working on a novel I can spend hours noodling in my notebook, trying to figure out how the basics of magic and society work, because there’s nothing more frustrating than getting halfway through a plot and then discovering a gaping hole in the basic premise. But for “Virgin” I think my main focus was on the physicality of necromancy—that, and how well it works as a metaphor for intelligence work. Once I hooked those two things together, the rest fell into place with surprising ease. And I definitely have other ideas planned for a quasi-WWII world, but you know how it is. So many ideas, so little time….

The virgin says at one point that she’s lodged a protest with “the Sisterhood.” Can you tell us a little bit more about this group? For me, the name immediately brought up connotations of Frank Herbert’s Bene Gesserit. Was that intentional?

I don’t think the Bene Gesserit reference was intentional, though I have no doubt that Dune is lurking around the depths of my subconscious, along with every other book I read passionately as a teen. I think the Sisterhood in “Virgin” is much closer to a nun’s holy orders: less powerful, less scheming, and much more subverted, or even perverted, by the war. I don’t think the virgin would have been who she was, doing what she did, in peacetime.

This piece carries a very strong anti-war flavor. Is that a theme that you’ve drawn upon before?

It’s a theme that will recur in a lot of my work. Aside from the sheer destructiveness of war, I’m definitely not a fan of the military mentality, particularly because of the way it can overwrite ordinary people’s moral codes with one that’s a lot more ruinous. But one of the reasons why World War II is an on-going fascination for me is the fact that, without question, it was a war that had to be fought. A “moral war” seems like an oxymoron to me—and maybe never more so than now—yet Hitler’s fascists had to be opposed. But even soldiers who are fighting for a just cause will find themselves doing things that would have appalled them as civilians.

“Virgin of the Sands” contains a lot of sensual material, and sex is clearly critical to the Virgin’s job. It was also originally published in an anthology about sexuality. But with the focus of the piece so strongly on military intelligence and military failure, it’s certainly not erotica. Did you expect the piece to be as sexually charged when you began writing it?

It’s been a while since I wrote the story, but I think the sex—or anyway, the love affair between Graham and the girl—was probably the starting point for me, and for the story to work that very conflicted relationship had to be physical, considering the physicality of the fighting and the magic they were both engaged in. All those bodies, you know? But at the same time, the sexiness did surprise me, since I tend to be a little prudish, if anything, in my fiction. And I was very surprised that it sold first to an erotica anthology, since I thought I was writing a horror story!

I haven’t been writing a ton of short fiction lately, because I’ve been pretty invested in various novel projects. I have a YA literary horror, a supernatural suspense, and a fairly traditional fantasy adventure, all in various stages of completion—or, to be more realistic, non-completion, just at the moment. I’ve always been a sucker for variety. And if anyone’s interested in checking on my progress, they can drop in on my website at
www.hollyphillips.com.