In this week’s Author Spotlight, we ask author J.S. Breukelaar to tell us a bit about her story for Fantasy, “Union Falls.” 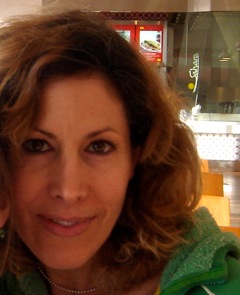 Could you tell us about the process of writing “Union Falls”?

I finished the story and it was close, but not there. For some reason this disturbed me more than any other story that I’d written. It meant a great deal to me, and it was terribly important to get it right. But I knew it wasn’t. I showed it to two trusted readers, and they asked the right questions, and I started again, and that time it came out as it should, effortlessly, as if someone was telling me, rather than I was telling it. That’s when you know it’s true.

In terms of where the idea came from and so on, I’m never able to answer that. The setting in this story came first, that’s all I know. It’s a place I haven’t been to for a long time.

Ame’s favorite song is “Bette Davis Eyes” by Kim Carnes. Its lyrics seem to describe her. Was the song inspiration for the character? Or did you find the character first and the song later?

The character came first. In the writing, Ame was telling me the story, and the song came out of nowhere. I just picked a random song from the eighties, random because I shy away from over-thinking things and trying too hard to fit details to a theme, and random because it’s a classic, one-hit wonder kind of thing, but I can see now that it fits perfectly. I think also because Ame’s voice in my head always had that slightly cracked sound, like Kim Carnes but not quite, kind of peculiar and raw, so it was easy to imagine her singing that song, but then kind of getting it all wrong. And now that I’m thinking about it, for the first time actually, the image of Bette Davis also seems to fit, doesn’t it, because Bette Davis in life and on the screen seems so out of sync, so kind of off-world. At least to me. She’d come onto the screen, and you’d think, oh no. What’s wrong with this picture?

Deel “hadn’t touched a soul since her family was killed.” Yet it’s the armless stranger who moves her the most. Have you ever been moved by a stranger?

All the time. My stories are peopled by these chance encounters. By dream characters, minor players in novels who get under my skin, stuff on the cutting room floor, a stray bar of music or scrap of lyric. That’s what moves me.

I don’t talk to strangers. I’m kind of scared of them actually. But they talk to me. Skinny kids and bag ladies. I have come such long distances that I always feel like I am the stranger. It seems like wherever I am, my accent stands out, or my appearance. Rimwalkers kind of target me. I was leaving the park the other day after walking the dog and I noticed a caretaker get out of his van and take his charges—two young disabled men—to the restroom. The dog and I got into the car and I put it in reverse and the next thing I knew the whole car started shaking and I heard a terrible guttural roar, and one of the men had broken loose and had jumped onto the car. He’d sprawled across the hatch suckered on like a giant squid or something and wouldn’t get off, barking and roaring like he was trying to tell me something.

I’m intrigued by the idea of waiting for a stranger, someone who will take you to where you belong.

Music is a key feature of both “Union Falls” and your novel Blue Moves. How does music feature in your own life? Do you listen to anything in particular when you write? Do you find inspiration in it?

I showed some skill at the piano when I was a kid. But I have a horror of performance. So I am intrigued by that. By the process of moving from the raw private moment to the public persona. What gets lost, what gets found on the way. Who you become. I listen to music obsessively. Nothing special. Punk, I guess. Patti Smith was my muse for Blue Moves, you know, but so is Meat Loaf. And Jane’s Addiction and Johnny Cash and Bob Marley and Tom Waits and Thom Yorke and Beth Ditto and Rufus Wainwright and Florence Welch and Tom Petty. I’m a sucker for a voice. It’s the voice that kills me. I try and write with the blood of the voice. That’s what inspires me. Human noise.

Sometimes I listen to the characters’ songs when I write the first drafts. Then I don’t have to. It’s there in my head. So I just play along.

I’m working on my second novel, American Monster, which I should have had finished and sent to my agent by now.