In this week’s Author Spotlight, we ask author James Alan Gardner to tell us a bit about his story for Fantasy, “Three Damnations: A Fugue.” 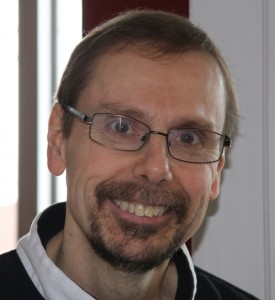 You titled your story “Three Damnations: A Fugue.” In musical terms a fugue is a composition utilizing two or more voices to explore a theme. Why write a story as a fugue?

The first part of the story (Danny in the haunted house) came out in a rush, pretty much as it appears in the final version. The verse that starts the story just materialized from my subconscious and I saw the whole thing: a haunted man who can’t let go.

After I finished that part of the story, I asked myself what came next. The obvious answer was to keep going along the same line: I should write about someone who was as emotionally stuck as Danny. Of course, the next part had to contrast with the first part in some way …  and that’s when I got the idea of writing a three-section story that combined horror, science fiction, and fantasy. In my mind, those three genres are intertwining masks of a single underlying genre, so I thought I’d write a story that reflected that.

The key word is “intertwining.” Just as horror, science fiction and fantasy intertwine, the stories of the three characters intertwine, feeding back on each other, cutting in and out. In Danny’s story, Mandy is dead and Graham is completely forgotten—just some kid Danny and Mandy used to hang out with. In Graham’s story, Danny dies, Mandy is slated for death, and Graham eventually kills himself. In Mandy’s story, Graham and Danny are both dead, but she brings back versions of them in an attempt to “correct” her own life. Around and around it goes …  like a fugue, with the stories chasing each other, interacting and heightening each other through their similarities and contrasts.

Ultimately, I realized I was writing a story about three people who are trapped in different versions of hell: the three damnations in the title. None of the three has the strength of character to break free. The verses at the beginning and end of each section show the characters trying not to give in to temptation … but good intentions aren’t enough.

Why was Danny’s story a haunted house story?

Danny is haunted, not just by his guilt over killing Mandy, but by his inability to make anything out of his life. He keeps going back to the house, rather than moving on. The house itself reflects Danny’s sterility: the deadness of the garden, the emptiness of the rooms, the bleak repetitions of the murder and his other experiences.

Why do haunted house stories remain such an enduring favorite genre for authors and readers?

There’s something evocative about the mood of a haunted house: wistful, angry, lost. For me, haunted houses are about some wrong turn taken in the past … and we all know what that feels like. Often, there’s a sense that the house might be exorcized: that we can fix what went wrong if we’re smart or pure hearted enough. That possibility of redemption is a great starting point for a story.

Of course, from a purely mechanical viewpoint, an entire haunted house has more scope than a single ghost. It gives writers more elbow-room to play around.

Why was Graham’s story a time travel story?

After Danny’s “horror” story, I switched to science fiction … but I wanted the same sense of damnation and inability to move on. A time travel story is perfect for that—so many time travel stories involve looping back, over and over, in an attempt to get things right. But in many such stories, every time you try to fix things, you just make them worse.

Why do time travel stories remain such an enduring favorite genre for authors and readers?

I think we all like the mind-bending aspects of time travel stories: the complexities of paradox and how things can twist back on themselves. Time travel stories also appeal to the desire for wish fulfillment—fixing past mistakes so they never happened, and having advanced knowledge of the future so that we can anticipate everything perfectly. Of course, time travel stories often teach the opposite lesson: that trying to change the past or game the future will just blow up in your face.

Why was Mandy’s story a story about the occult and magic?

First of all, I wanted to finish the horror-sf-fantasy trilogy. In order for the fantasy story to work, I needed to make sure that Mandy was a good fit with it. She’s the sort of character who believes she can make things happen by sheer force of will: If she wants something badly enough, the universe will make it so. Turns out that she’s right … but because of her self-centeredness, she ends up making a hash of it.

Why do stories about the occult and magic remain such an enduring favorite genre for authors and readers?

Once again, it’s about wish fulfillment: that we can achieve our fantasies just by waving our hands. But fantasy stories often come with the proviso that you must deserve to get your wish. If you’re selfish, your wish will go awry.

Stories about magic also deal with the mysteries of the world and our feelings of the numinous. I think most of us have had times when we’ve felt, “There’s more to the universe than I know.” Whatever we think the “more” is—whether it’s supernatural or simply the grandeur of real life—fantasy stories are appealing vehicles for talking about what we’ve felt.

Why mix genres within a single story?