In this week’s Author Spotlight, we asked author Jeffrey Ford to tell us a bit about the background of his story for Fantasy, “Creation.” 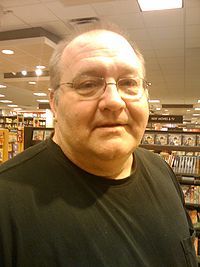 It’s been a long time since I wrote the story, so I don’t remember it too clearly. I do remember I’d just gotten interested in the mythic figure of the Green Man. Saw a mask of him in a small art gallery in Florida and had never heard of him before. When I got back to Jersey, I did some research and found a good book on the subject with lots of cool pictures. He appears in the stone work of a lot of cathedrals throughout the world. He was one of those mythic entities that was replaced by the Judeo-Christian pantheon, but artists and storytellers kept his memory alive, sometimes subversively, as in the cathedrals, I think because they sensed his message to us was an important one. I liked that idea of paganism lurking beneath the surface of Christianity, hiding out, watching us from behind the monolithic monotheism, whispering to us to remember where we came from. The Green Man is much the cooler God to me. That was one of the inspirations. The other was my old man. A gear cutter, an artisan like the masons who built the cathedrals, also an atheist. He didn’t need God to tell him how to love people. He did it his own way.

As a fan of yours, I can’t help but notice an affinity in your writing for creating nostalgic stories with a young boy on the cusp of adolescence as a protagonist. Your novel, The Shadow Year, comes immediately to mind as a great example. Why is that? What is it about this age in one’s life that makes it such an attractive perspective for writing stories?

I don’t have any more fondness for this character than any of the others I’ve written, but within the boundaries of its limitations there is a world of stories to be told. I guess these stories deal with some kind of awakening from childhood. “Out of the Cradle Endlessly Rocking” stuff.  It’s a rich theme, sometimes too rich, but at those points of revelation when you’re a kid, sometimes the effect is so startling the world warps momentarily and things take on the attributes of the fantastic—both light and dark.

One thing about your stories and novels that always rings true for me are the families you create. The parents are flawed and imperfect yet still loving. This creates a very realistic and relatable dynamic in the relationships you portray through your fiction. As a writer, would you have any tips for me (and our readers, of course) on how to create such realistic families?

You have to know the characters, or at least believe that you do. The moments that make up family life are primarily quiet ones, in and of themselves seemingly insignificant. Yeah, there’s the drama, but in between those episodes there are worlds of the wonderfully mundane. Getting the mix right of the two has something to do with it maybe. One thing I discovered was that for me, the family came clearer to me due in some way to my really having a sense of where they lived; the house, the street, their neighbors, the town, the time. I present this stuff as simply my experience. I wouldn’t encourage anyone to necessarily follow it as a guide to writing a family.

There’s some great fictions that offer insight into this, though:

There is nothing worse to me as a reader than a bad story with no resolution. Yet, there is nothing better to me than a story with an open ending that works well. “Creation” falls into the latter category. I loved the open ending in this one. That measure of ambiguity added to the overall mystique and meaning for me. What is the secret to writing open endings that work?

There’s no real secret, just don’t close down the possibilities for the story’s outcome. Beyond this, though, there’s some work to do. You’ve got to be able to engender throughout the story that either outcome could be possible. If you can’t do that, that type of ending is sometimes pointless. On the other hand, I’m not usually fond of neatly tied up endings. I like to dream past the text of the story. There are writers who can really nail that culminating crescendo, though, and that too is a beautiful thing when you can find it. There are some great stories by Henry James where that ambiguous ending effect is sweet, like “The Turn of the Screw,” “The Figure in the Carpet,” “The Aspern Papers,” “The Friends of the Friends,” etc.

Religious themes crop up in many of your stories. “Creation” was itself a play on the creation story from The Bible. In your opinion, what is it about fiction that makes it such a great medium to explore matters of faith?

The Bible is a story about writing. God creates the world with words. The logos is his medium of creation. I believe both God and Jesus are referred to at certain points as “The Word.” The Tower of Babel story is an aspect of this. The Ten Commandments. There’s a lot of resonance between this and the act of writing fiction. Studying the Bible, as literature, is interesting. Too bad the dogmas that spring up among the religious bureaucracies that surround it are so pernicious. They demand you forsake your own reading for theirs. I admire the aspect of the Jewish religion wherein discussion of holy texts remains open to interpretation throughout the centuries. This does also tell you something about human nature, which is always good for writing. I like to read religious texts from different religions, especially ancient ones like The Ramayana and Mahabharata. They tell you about the foundations of the cultures they were written for. A fascinating study.

So, what’s next for Jeffrey Ford?

I’ve got a few stories coming out in different anthologies in the upcoming months of this year.  Here are some of the new ones: