In this week’s Author Spotlight, we asked author Jeremiah Tolbert to tell us a bit about the background of his story for Fantasy, “You Have Been Turned Into a Zombie by a Friend.” 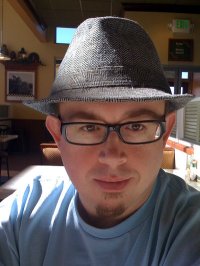 “You Have Been Turned into a Zombie by a Friend” is a story that provides a unique twist on the traditional zombie story and mixes genres: horror, science fiction, fantasy, etc. When writing this story and then marketing it, did you have one of these genres in mind? If you had to pick just one genre to classify this story, which would it be and why?

I don’t think too much about the genre when I write short stories. I mean, I know I am going to write speculative fiction, but I oftentimes don’t really know what genre the story fits into until it’s over. I wrote this one aimed at a zombie anthology, and ultimately, I guess it didn’t work out tone-wise. I have a hard time pulling off anything truly horrific, to be honest. For me, scary stuff is like, “Will I be able to pay my rent this month?” I don’t get disturbed by the idea of the living dead, or unknowable cosmic horror. Anyway, horror strikes me more as an emotion than a real genre. You can have SF-horror, fantasy-horror, serial killer-horror … I think of it more as a tone than anything else, and when it comes to tone, “flippant and ridiculous” seems to be what comes out in my work more than anything else.

The stories set in this world are predominantly fantasy, I would say. There’s very little science to them, except for the odd bit of computer science.

In general, I don’t like coming at any theme head-on. I’m always trying to find a fresh take on it that I can make my own (but then, doesn’t everyone?).

What exactly is “mojo,” and how does it work?

Mojo is stored energy that can be used to power computational magic—it’s measured in bytes and megabytes and so on. It’s created by special collector “sprogs” tied together with time-wasting activities. Things that you do that don’t take up a lot of brain power, like playing silly games or filling out internet quizzes. It’s like potential human brain energy saved up for use later. I have some more elaborate explanations in the novel I’m working on set in the same universe, because mojo is a bit of a problem child in my worldbuilding for these stories, if I am being honest.

Speaking of Net-mages, what inspired these characters?

John Joseph Adams was looking for pirate-themed stories for a guest-edited issue of Shimmer. I wanted to write something, but I didn’t want to write about eyepatches and sailing boats. I’m from Kansas; I didn’t see the ocean for the first time until I was nineteen. I don’t know anything about boats or oceans or grog.

But I pretty much live my life on the internet. I work as a freelance web developer and designer to pay the bills, and so I’m absorbed in everything that goes with spending sixteen hours a day at a keyboard. I’ve always been fascinated by intellectual property issues. And I may have been an avid little warez kid when I was younger. So it was really the idea of software piracy that got me thinking—magic and spells are a kind of intellectual property, so what if they could be pirated online too? And the net-mages grew from that seed into the mix of rogue cabals that break spell copyright laws and the bad guys of the Magical Association of Atlantis, old tired wizards that have been around for centuries and don’t want anyone else to play with their toys. MAA came about because every pirate needs an enemy with an *AA name; The RIAA, the MPAA. But “America” seemed a little too small scale.

In the book I’m working on, one of the protagonists works for the MAA, and I’m getting a nice look inside their internal operations. It’s suspiciously like every soul-sucking corporate job I’ve ever had.

I’m always curious about the writing process itself. Was this story plotted ahead of time or did you just start writing? How much of the fantasy world described did you develop prior to writing the story?

The surest way for me to kill a story idea is to try and outline it ahead of time. This is both nice and problematic. I get to be surprised by what happens on the page, and that’s fun. But generally, I get the plot wrong in the first draft because of this. I haven’t managed to internalize the process of a good arc yet, so it takes tweaking. I sometimes end up writing the story all over again from scratch, using the first version as a road map in my head. I almost always end up rewriting the ending several times. Luckily, I write very quickly, or this would be a very time consuming thing to do. Trial and error is the only thing that gets me through plotting. I really look forward to the day I get a plot right in the first draft.

There are two other stories set in this world: “Captain Blood’s B00ty” and “One-Click Banishment,” both selected for publication by John Joseph Adams as well. And I’m writing a YA-ish novel as well right now called Takedown Notice about what happens when the MAA finally gets the upper hand in the spell copyright wars. So I’ve done quite a bit of work on this world prior to this one, although in sequence, now that I think about it, this one was actually written before “One-Click Banishment.” It’s funny how publication schedules and acceptances work out.

How did you decide where to make the technology end and the magic begin?

I usually try to be realistic about what plain old computers can do. It always bugs me when people use computers in magical ways on television, without, you know, resorting to actual magic. But really, they’re yin and yang here. In the world of these stories, magic can’t be performed without a powerful computational device. Most of my characters see magic sprogs like most people see programs. We click a button and the software does what it was built to do. (Sometimes, it crashes. Or if that program is Windows, it crashes entirely too often.) It might as well be magic, if you don’t know a thing about programming or coding.

I could give you a little more handwaving here, but who wants to let a little thing like plausibility get in the way of a fantasy story?

Did this story pose any particular challenges for you as a writer?

Mostly the usual: voice, tone, plot, theme, character, worldbuilding. I had a pretty tight deadline for this one for its initial submission. I couldn’t find the voice of the protagonist, I seem to recall. I have four or five false starts of this one in my “dead ends” folder. Some stories come out like a dream and others are like pulling teeth. This was the latter.

I always like to give a writer an opportunity to promote him or herself. Do you have any upcoming projects you would like to announce?

I understand I have a story I wrote over six years ago coming out in Black Gate sometime soon—”Groob’s Stupid Grubs.” It’s probably my only take on more traditional-ish sword and sorcery stories with a little clever goblin as a protagonist. I worry it’ll make me look like I’m riffing on (or robbing blind) Jim Hines’s work, but I swear I wrote it so long ago I hadn’t even heard of his Goblin books. Still, I really loved the character of Groob. I hope to write more about him some day.

I’ve got new stories circulating in the world. The one I’m most proud of is “Powell’s Fortress of Books,” a satirical SF story about the mech pilots who protect the famous bookstore in Portland, Oregon from rampaging hordes of genetically engineered pocket monsters that eat books in order to power up and mutate. And there’s Takedown Notice which I may or may not finish this summer. Mostly, I’m just trying to scrape by in this godawful economy—which they tell me is improving, but it’s yet to do so for me. Writing is a luxury I can’t always afford, unfortunately.