In this week’s Author Spotlight, we ask author Jonathan Lethem to tell us a bit about his story for Fantasy, “Using It and Losing It.” 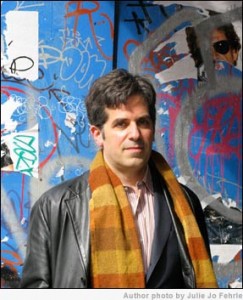 One of my favorite lines in this piece is, “The only words Pratt understood on the programme were the neologisms: Crisisgate, Lovemaker Missile, CLOTH Talks, Oopscam and Errscam.” We live in a time when “nom nom” makes it into the Oxford English Dictionary. Words seem to be created, accepted and discarded at an ever more-frantic pace. Do you have any thoughts on the growth and evolution of language?

Well, I suppose I must have such thoughts, but they don’t seem to have advanced any since I wrote this little parable, nor been extended into any study into what it would seem should have been a definite interest, from the clue of this early story! I know there’s such a thing as semantics, and the philosophy of language, and of course the genealogy of language and so forth, but I never have gravitated toward any such understanding. I’ve never learned a foreign language, I never studied Latin and can only sometimes tell whether a word is Latinate or Anglo-saxon, and I’m not even very good at naming the parts of grammar beyond the “primary colors” (adjective, noun, verb and a couple of others), nor at doing literal grammatical analyses of sentences.

What strikes me now is how much like Pratt I am, in a way—devoted to hardening my shell of ignorance, and operating within it, even if it isn’t so small as his. I’ve always had a very excited feeling about the innate properties of words, their tangible, and often onomatopoetic properties—almost a synesthetic feel for them, that I’ve preferred to having these external frameworks and devices surrounding language. It’s with that “feel”—I hope I’m not mystifying things—that neologisms are always so striking to me, excitingly weird and terrific when they’re necessary, when they expand something (without having any goal in mind, no Joycean impulse to word-creation, I do find I often invent little words, sometimes in a way no one would be too likely to notice—my spellchecker tells me about it—and I usually leave these in the text, for future struggles with copyeditors). They’re also ugly and objectionable when they seem to make language coarser or more crass and commercial, or when they open the way for historical amnesia—we should, for instance, call the horrible corporate entities that plague our reality “trusts,” shouldn’t we? But it seems somehow naive and antique—or perhaps it reminds us that we thought we “busted” the “trusts,” yet here they are, ruling our world. Lydia Davis has this great short story that rants against the funeral directors who’ve invented the word “cremains,” which strikes her as demolishing whole areas of human sensitivity in one blow—I agree with her.

What are some words you would never, ever want to lose?

Just you asking that makes me instantly unable to recall them.

When Pratt has finally eliminated his English vocabulary, he says: “New York transmuted itself into a wonderland of incomprehensibility.” He is cast adrift from humanity, more alone, and more free. This is in fascinating contrast to Orwell’s 1984, where the government is destroying English so people can be better controlled. Were you thinking of 1984 when you wrote this? Were there any books or stories that influenced this piece?

Well, at the time I wrote this—I was twenty-one, or twenty-two—Orwell’s 1984 was one of the books that most ruled the small kingdom of my literary influence, so it would have been traceable (along with Philip K. Dick, J.G. Ballard, Thomas Berger, and Franz Kafka) in this story, or anything else I wrote or probably mused about writing at the time. All of those writers are conscious elements in this mix, as ponderous a suggestion as that may seem—how could such a slight story support so many titans? Yet, there it is—I did go around being consciously influenced by all of them at once back then. It’s a miracle the results are readable at all.

What’s striking to me here, though, is the powerful new influence I’d come under, and how much it directs this story in particular: I’d discovered the short stories of Bruce Jay Friedman in the months before, and was reading them compulsively. I clearly gathered in quite a bit of his tone and form for this piece.

Pratt works so hard to protect his aloneness, to escape the constant presence of communication. This story was written in 1990, before everyone owned a cell phone, before Facebook and blogging, before wireless internet. I have wondered if we use telecommunications to block out the press of humanity or to more thoroughly inundate ourselves. Do you think we now have more control over communication or less?

I tend to believe much less has changed than people sometimes want to believe. Ironically, the world was at the time threatening—or promising—to become far less linguistic and textual—the story ignores all this, but in the background was the invention of virtual reality, which I wrote about incessantly back in that time, usually from a crank’s perspective. The promise was that we’d shed language (along with, incidentally, our bodies), in favor of a polymorphic new language of color and movement and pure understanding. Odd how much the internet has instead been a giant pile of epistolary mediums, a series of rivalrous telegraph poles for all these short urgent missives we’re all tapping out. But in a much more literal and prosaic sense there is something strangely antique about this story, which if it were recast in the present would beg the question of cell phones, the internet, and so forth. In fact, it would seem to demand that the last word he ever understood was glimpsed on a sheet spitting forth from a fax machine, I think.

The story also looks odd in the assertion that Montreal would in any way provide Pratt with such perfect insulation from the English language. I lived in Canada for a little while later on, and it wasn’t like that. Even Paris isn’t like that now—maybe it would have been when I wrote the story, still, but barely.