In this week’s Author Spotlight, we ask author K.M. Ferebee to tell us a bit about her story for Fantasy, “Seven Spells to Sever the Heart.” 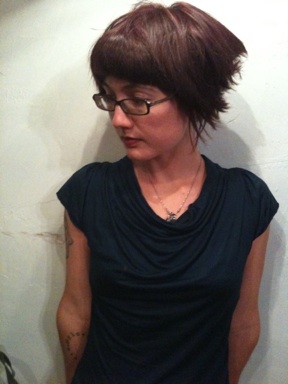 “Seven Spells to Sever the Heart” is a dark fantasy about suicide and magic. What was your inspiration?

I rarely have a clear inspiration for my stories. They just sort of come out of me. Sentence by sentence. Like drawing blood. (She said grimly!)

It just so happened that I was reading about the life story of the modern philosopher Ludwig Wittgenstein around the time I read your story. I sensed a possible connection since three of his brothers committed suicide. Was this connection here on purpose, or am I just reading too much into your story?

Yes, the ghost of Ludwig Wittgenstein is constantly at my shoulder! (Though—of course—as a ghost, he never speaks to me.) He is a major, really the major, intellectual figure in my life. I’m a student of his philosophy, but I also have a keen interest in his biography and background. So I was aware, as I was writing, that I was drawing on the history you describe: the three brothers who committed suicide—though one of those deaths is, I believe, only assumed to have been a suicide—and also the rather dark and baroque narrative of the broader Wittgenstein family. That said, there isn’t any particular connection between the story and Wittgenstein; merely my non-story life bleeding into the life of the story.

Central to your story is the notion that if one is only feeling emotional pain it would be better to feel nothing at all. Do you agree with this premise? Why or why not?

I don’t believe that pain is something extrinsic to goodness. I believe there can be goodness in suffering, but that this does not mean suffering itself is good. The question is very complicated and interests me. I’m quite religious, so my private take on it tends to come from that direction. I think that part of my answer may simply be the story, and that I wrote it to express an ambivalence that I could not otherwise clearly articulate.

Magicians and witches are enduring tropes in fiction. What do you think accounts for the perpetual popularity of these types of characters?

Well, they breed as tropes in every generation, don’t they? Magicians and witches have a feeling of awe and strangeness to me because I read a great deal about them when I was a child, which is the era in which that awe and strangeness seeds. I think that’s true for a lot of people. I think if I had read a great deal about railway conductors in that era of childhood, it’s very possible I would write stories about railway conductors. But I do also think that magicians and witches are particularly good ways of talking intelligibly about something that’s otherwise difficult to put our collective finger on, a connection to the source of that same awe and strangeness.

The number seven shows up everywhere as an important number—it can be found as an important signifier in folk and fairy tales, modern fiction, and even many religions. What is it about this number that you latched onto when writing this story? Why use seven?

To be honest, I almost always pick numbers purely for sound—because I happen to be writing a sentence in which I really need, say, a two-syllable number, or a number that starts with “n” or that ends in a long “e.” Very unromantic, I know!

Why use a fantasy narrative to write about real-world situations and problems? (Suicide, loss, grief, etc.)

I never write non-fantastical narratives; somehow they simply don’t happen for me. I suspect this is because I can write stories only when I am saying something I’m not otherwise capable of saying (see above, re: the problem of pain). I think that fantastical stories are rather like parables in that they contain within their very forms, their structures, some aspect of what is being explained. Because of this, they communicate certain ineffable truths in a way that factual stories can’t communicate. I’ll fall back on that word “strangeness” again, or maybe “mystery.” Fantastical stories (or parables) are often needed in order to discuss or communicate about mystery.

I have stories appearing in Strange Horizons and Shimmer next spring. I’m currently studying for my MFA in Creative Writing at The Ohio State University, in stormy Columbus. From time to time I update my blog with news and musings.