Kelly Link’s “Swans” combines pop culture, adolescence, and the fairy tale tradition into a world as unique as its heroine, Emma, the silent, home-ec-loving daughter of a local king. In this week’s Author Spotlight, we asked Link to tell us some of the background on her story and the way fairy tales have shaped her vision of fiction. 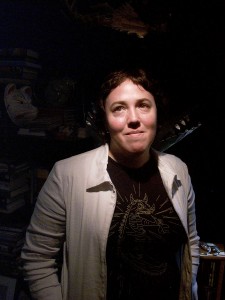 “Swans” was originally published in the young adult anthology A Wolf at the Door: And Other Retold Fairy Tales (edited by Ellen Datlow and Terri Windling), in which thirteen authors recreated thirteen traditional stories. While Link has written many re-imagined fairy tales, “Swans” was the first to be marketed to a YA audience.

Still, as she noted, “‘Swans’ is probably more accurately ‘middle grade,’ or on the very young side of YA.”

If a YA story describes a first encounter with a new realm of responsibilities, Link’s story creates a new encounter with classic fairy tales by fusing multiple narratives into a single story. “Swans” combines specific details from multiple traditions: Cinderella’s stepmother and fairy god[father], Rumpelstiltskin’s straw spinning, and, of course, magical transformations from the Wild Swans.

“I’m usually borrowing from more than one source,” she said, on writing re-imagined stories. “Maybe I ought to try reworking a fairy tale while sticking strictly to one narrative.”

If a single narrative may influence a future story, multiple sources help facilitate the depth of setting within “Swans.” Emma’s world is fairy tale meets middle school. Link infuses a contemporary suburb with castles and fairy godparents; she melts evil stepmothers, frustrated librarians, and ribbon-cutting kings into one cohesive unit. Link’s story reminds readers young and not-so-young of the magical influence fairy tales so often have on adolescence.

Link, for one, noted the place of fairy tale collections in her childhood reading. She remembered, “I read all the usual stuff, the Brothers Grimm, Hans Christian Anderson, etc. I also read Robin McKinley’s Beauty, Angela Carter, Eudora Welty’s The Robber Bridegroom, and Jack Zipes’s Don’t Bet on the Prince, and of course all of Terri Windling’s and Ellen Datlow’s anthologies. Later on, as an adult I read Ursula K. Le Guin’s “The Poacher,” which is still one of my favorite stories, as well as a slightly uncomfortable metaphor for how a writer like me uses (and inhabits) fairy tales.”

In Le Guin’s “The Poacher,” a young protagonist spends his adolescence hacking through an enchanted hedge. Inside, he finds a sleeping kingdom. An unprivileged outsider cannot wake the court, and he must wait instead for a prince who belongs within the magical world.

If Link has inhabited a similar enchanted metaphor, she has no trouble waking any fairy tale character. Instead, she ushers readers into Emma’s place of quilts, enchanted swans, and library books, where outsiders leave the traditional fabric of fairy tale to be blanketed in a world of Link’s unique creation.

Rebecca McNulty is a student of English and International Studies at the College of New Jersey, and a graduate of the Alpha Writer’s Workshop. She prefers ghost stories to romances, has learned which coffees taste the least like coffee, and can be found at http://rlmcnulty.dreamwidth.org/.