In this week’s Author Spotlight, we ask author Lavie Tidhar to tell us a bit about his story for Fantasy, “Red Dawn: A Chow Mein Western.” 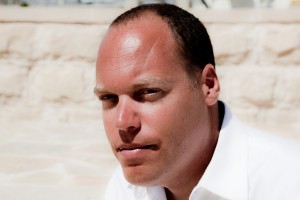 It’s a combination of things I love, including Larry Niven’s underrated The Magic Goes Away stories, spaghetti Westerns and kung fu movies.

The villagers in your story mine for Qi. Is this at all related to the chi of Chinese culture? If so, why use this as part of the magic system inherent in the story?

Qi is the transliteration into English using Pinyin. Pronounced “chi.” Meaning energy or life-force. This story pays obvious, I think, homage to Larry Niven’s The Magic Goes Away stories, where the magical force is called “mana,” from the South Pacific term.

As in the Niven stories, the magic is a finite resource. One new source is naturally from space. In The Magic Goes Away, the heroes envision bringing down the moon as a new energy source.

Why do so many cultures have a fascination with the western genre? What do you think accounts for its enduring popularity?

I don’t know. One of the things that fascinated me, and the other major influence on this story, was the process of Takashi Miike’s Sukiyaki Western Django, a Japanese Western “remake” of an Italian/American Spaghetti Western which was itself a remake of a Japanese western! This sort of self-feedback loop, where you take an existing concept and keep modifying it, and changing it in the process, I found that fascinating. It raises all kinds of questions of ownership. I also love Kung Fu westerns, like Jet Lee’s Once Upon A Time in China and America and the film that came shortly afterwards, Jackie Chan’s Shanghai Noon. And, as I said, I love The Magic Goes Away. So I wanted to fuse all these things together, somehow.

Knowing your interest in promoting speculative fiction from various nationalities and cultures, how does “Red Dawn: A Chow Mein Western” fit into this interest?

Well, I’ not sure it does. I mean, I have an interest in promoting other people’s writing, through the World SF Blog and the Apex Book of World SF anthologies (Volume Two should be out early next year). But that’s me wearing a different hat, in a way. My writing is influenced by where I live, a lot, but also by what I read and watch and so on. I thought the fun thing about this story was trying to combine these various elements.

As a writer, what does one need to do to write about other cultures in a way that does not demean or misappropriate that other culture in any way?

Well, that’s always an issue, isn’t it? In a way, of course, I’m appropriating everything. I’m borrowing this very American mode—the Western—and Niven’s magic system, and I’m setting it in a sort of Victorian-era China dealing with foreign incursions. I’m even borrowing the language, English, this story is written in. But I’m doing it within a very conscious framework of cross-cultural borrowing that is both the western, and pulp fiction, in their various reincarnations.

There seems to be a resurgence of weird westerns these days. Why do you think this might be?

I don’t know if there is, but … westerns are fun!

I’ve known you and been a reader of your stories and novels for a while now. What strikes me about your writing is how varied it is. You seem to hop genres and blend them together as if it is second nature. If you were forced to define yourself within current genre restrictions, what genre would you pick? If your entire oeuvre were to be placed on a bookstore shelf, which category would you choose and why?

I wouldn’t pick a genre. I can see, from a commercial perspective certainly, it helps to place yourself in one particular category, but I’d get so bored…

So, what’s next for Lavie Tidhar?

My novel Osama is out now, from PS Publishing in the UK, and so is my novella Jesus and the Eightfold Path, from Immersion Press in the UK. One is a retelling of the War on Terror as a pulp novel. The other is the New Testament meets Monkey! One is very serious, the other is very much tongue-in-cheek … next up I think is The Great Game, the third novel in the Bookman Histories, early next year from Angry Robot. There are a few other books coming out at various times, including Going to the Moon, a picture book about a kid with Tourette’s, a small graphic novella currently being serialised in Murky Depths magazine called Adolf Hitler’s “I Dream of Ants,” a guns & sorcery collection called Black Gods Kiss from PS Publishing (a companion volume to the novella Gorel & The Pot-Bellied God), the second Apex Book of World SF and, well, a few others …