In this week’s Author Spotlight, we ask author Kristine Kathryn Rusch to tell us a bit about her story for Fantasy, “Unnatural Disaster.” 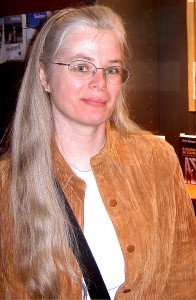 “Unnatural Disaster” does a great job capturing the irritating details of life in law enforcement: the petty politics, the contradictory rules, the personality clashes. How do you know so much about life as a police officer?

In one of my many secret lives, I’m an award-winning, best-selling mystery writer (under the name Kris Nelscott as well as Kristine Kathryn Rusch), so knowing how the police work is important to that part of my writing career. Besides research, how do I know? I used to work for a forensic psychologist. His job was to evaluate people for court—to see if they met the legal definition of insanity, to help with custody cases, to make sure they could continue getting their state-ordered meds. I met a lot of police officers there, and spent a lot of time with them. Plus I have many friends in the FBI (that makes my old hippie self shudder) and lots and lots of friends in the legal community. So law enforcement stuff is almost as natural as breathing to me.

This story is a new piece, and the set-up—an earthquake in Japan sparks a tsunami in Oregon—reminds me of the fears a lot of folks had after the March 11th earthquake in Japan. Did that incident influence this story at all? And living on the coast, have you had any uncomfortable storm or tsunami experiences?

We didn’t just have fears. We had tsunamis all along the West coast. Fortunately the tide was out, or parts of the coast would have been leveled, just like in Japan. We would have had a nine to fifteen foot crest had the tide been in. As it was, several people died to the south of us, and there was still a lot of damage—docks, boats, marinas.

Did that inform the story? You bet. Initially I was going to write the experience exactly, since Whale Rock is based on my town of Lincoln City. The weather was sunny, and it seemed surreal. But Whale Rock isn’t Lincoln City, so my subconscious wanted rain and terrible weather and no exact date.

As for my own experience, well, we’ve been expecting this. We always pay attention to earthquakes in the Pacific because they could devastate us here. So that night, Dean called me out of my office at about 10:30 to tell me that there was a massive earthquake in Japan. We watched the least egregious local news, then I went back to work. When it became clear the tsunami would hit about 7 AM, we paid attention but didn’t do much since our house is outside the historic tsunami zone. About 5 AM, the sirens started going off, warning people off the beach. Low-lying areas had already received reverse 911 calls, and half the town was either leaving or had left. Those of us on high ground stayed.

I was up to see the beginnings of it from my window, but there wasn’t much. Another friend had a police scanner and was giving us a play-by-play (with names of the players, since this is a small town with a volunteer fire department) as our friends tried to keep idiots off the beaches. The first crest hit around 7 AM, and the crests kept hitting all day. No one was hurt here, although there was a lot of property damage.

The most surreal thing, though, happened about 5 PM. Dean & I decided we were too tired to cook dinner, so we went to a local grocery that has excellent to-go prime rib. As we walked in, we saw a crowd. Everyone who was still in town, everyone who wasn’t working, had lined up for prime rib dinners. No one had gotten any sleep, and no one wanted to cook. It was an impromptu relief party. We all knew we had dodged a major bullet.

Whenever a tentacled creature shows up in a story, I think a lot of people immediately think of H. P. Lovecraft. But as a native Oregonian, I tend to think of some of our Northwest creatures, like the mythical Pacific Tree Octopus or the camera-friendly octopods living in Newport’s Hatfield Marine Science Center. Who are some of the cephalopods that have influenced you?

You hit it. I get inspired every time I go to the Aquarium in Newport. (The science center is connected to it, for those who don’t know.) I think the Oregon Coast is a lovely, mysterious place, and it inspires me every day.

To me we are. So I’m like Tadero in that respect. I’ve written many other stories set in the made-up Oregon Coast, though, and the chief that Tadero replaces, Dan Retsler, thought the supernatural was harder to deal with than people. (Those stories are available as stand-alone e-books now. They originally appeared in F&SF and some Daw anthologies.) So I know that opinions vary on this. But I think the stuff Tadero has seen is the most difficult to deal with—not in Seavy Village, but on the streets of Chicago.

Do you have any new projects you’d like to tell us about?

I have a lot of projects underway this year. It’s either feast or famine for me. In September, Audible will release my next Retrieval Artist novel, Anniversary Day, as a two-month audio exclusive. The book (in all forms, including e-book) will appear on December 1. In January, Pyr publishes the next Diving novel, Boneyards. I’m also doing paranormal romance under the name Kristine Grayson. Sourcebooks released Wickedly Charming in May, and Utterly Charming follows in October, with two more in 2012. WMG Publishing is reissuing my entire backlist, including the stories I mentioned above (The first is “Women of Whale Rock”) and the Kris Nelscott mystery novels. In the reissues, WMG is redoing all of my fantasy novels, including my international bestselling fantasy series, The Fey. So I’m quite happily busy!