In this Author Spotlight, we asked the award-winning and legendary fantasy author Peter S. Beagle to talk with us a little about the background of his story for Fantasy Magazine, “The Woman Who Married the Man on the Moon.” 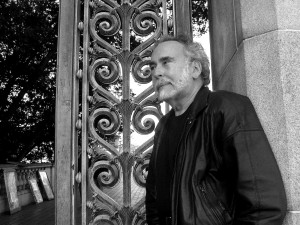 “The Woman Who Married the Man in the Moon” is a tale about the magician Schmendrick whom your readers will remember as a major character from The Last Unicorn. Why did you decide to return to Schmendrick as a central character for this story?

Connor Cochran asked me to do a book for Conlan Press that would be a set of Schmendrick stories set before The Last Unicorn. I’d never gone back there—I’d never written anything about Schmendrick’s earlier life, aside from a few vague mentions within The Last Unicorn itself—so I thought it would be interesting. Especially since Schmendrick existed as a character, in my head, well before I ever put him in The Last Unicorn. I used to tell my older daughter bedtime stories about the adventures of the world’s worst magician, and that was Schmendrick—that’s how he was born. For the Conlan Press project I decided to write three pieces: a story about Schmendrick as a boy, when he was first apprenticed to the wizard Nikos; another set in his mid-twenties, when he’s still full of himself and blithely expecting his magic to kick in for real any day now; and finally one taking place at a point in his extended life where he’s in despair of that every happening. That’s the one I finished first, and I decided to put it in my new collection from Tachyon, Sleight of Hand, as well as reprinting it here, so more people would hear about the complete set.

In “The Woman Who Married the Man in the Moon,” you note the importance of names: “No one outside family was ever supposed to know a person’s birth name: You could never tell what might be done with it by the ill-meaning.” What exactly is the importance of a name? What sorts of things might the “ill-meaning” do with a name?

There are all sorts of folktales about the notion of a “real” name, as opposed to the one that you share with the world. This real name, which only you and the person who gave it to you know, is supposed to be a direct connection to your soul. This means that an ill-meaning wizard who knows what he is doing could theoretically use your real name to bind you, so you can’t help but do whatever he wants. Letting someone know your true name gives them power over you, basically.

Speaking of names, Schmendrick’s name is a Yiddish term for a “stupid person.” Why do this to poor Schmendrick?

That’s not an accurate translation. It’s not so much “stupid person” as it is “a person out of his depth.” In other words, the boy sent to do a man’s job. This seemed terribly appropriate for the character. As a secondary thing, it was also a play on the name “Mandrake the Magician.” Mandrake was a very popular comic strip in my childhood, and there were even a couple of movie serials made about the character.

Schmendrick, when talking about the mortality of the flower he pulled from Mourra’s head, explains: “The flowers in our heads … those survive.” Why?

It depends on what you mean by “flower.” In this case it is a metaphor for poetry, dreams, and the soul. That’s what he’s talking about.

Thank you so much for taking the time to answer my questions. This really was a pleasure. I like to end all of our interviews by giving our authors an opportunity to communicate directly with their fans. As you mentioned, “The Woman Who Married the Man in the Moon” is included in your new collection, Sleight of Hand, from Tachyon Publications. Would you like to take a moment to talk about the other stories readers can expect to find in the book?

The collection begins with “The Rock in the Park,” one of five pieces I originally wrote as podcasts for The Green Man Review website. All the stories from this series are fantasies drawn from my teen years in the Bronx, and feature certain childhood friends I am still very close to, even after sixty years. Next up is “Sleight of Hand” itself, which deals with time and love and sacrifice. I don’t want to say more because I really don’t want to give anything away. Then comes “The Children of the Shark God,” which is very much my Robert Louis Stevenson tribute. Following that is “The Best Worst Monster,” which was originally written and sold as a children’s book manuscript, and was done purely for fun. I’d always wanted to write a monster story for kids, because they love monsters. “What Tune the Enchantress Plays” goes back to a universe I created that people have started calling “The Innkeeper’s World,” after the first novel I set there, The Innkeeper’s Song. I really enjoy playing in this place, and return to it whenever I get the chance. What’s next? Let’s see … ah. “La Lune T’Attend.” The title is French, and it means “the moon awaits you.” This is my second werewolf story—the first was more than forty years ago—and I’m enormously proud of it, not to mention pleased that I finally found a way to use some of the Louisiana bayou folklore that I’ve been collecting in my head for decades. Then there’s “Up the Down Beanstalk,” which actually has a much longer title. This one is the old fable “Jack and the Beanstalk” seen from the perspective of the giant’s wife. Following it is “The Rabbi’s Hobby,” which reviewers have tended to assume is autobiographical, though it really isn’t. While I am Jewish, and did know a lot of rabbis, my family was never terribly observant, and unlike the viewpoint character in this piece I was never Bar Mitzvahed. ”Oakland Dragon Blues” was a challenge to write because dragons have been done so many times by other writers, and I hate going over old ground. I finally decided to focus my story on a very personal dragon, one that only I would know about, who had damn good reason to be unhappy with me. “The Bridge Partner” is psychological horror of a very quiet, very specific kind. In my head I see it in black & white, like a French film noir. Then there’s “Dirae,” which was written for the Martin/Dozois Warriors anthology. I did my best to avoid all the obvious tropes with this one, and hope I succeeded. Some readers will be surprised by the violence in it. All I can say is that the story comes from a very deeply buried streak of violence in myself, and some kind of need to rescue. The penultimate story is called “Vanishing.” The roots of this one go all the way back to a shaggy dog piece I wrote in 1961 or 1962, about the Berlin Crisis and the problem with Germany being split in two between the East and the West. It never sold, and with good reason. Aside from a few broad laughs it really wasn’t any good. But a couple of years ago I finally took the central concept seriously, started from scratch, and found my way to something quite radically different. Then the collection ends with “The Woman Who Married the Man in the Moon.”

Are there any other upcoming publications or appearances you would like to announce?

One of my standing jokes is something George Burns used to say: “I can’t die, I’m booked.” This year’s schedule is like that. Entirely apart from writing I’m going to make a dozen or more convention and renaissance faire appearances, and there is talk of a kind of “monthly mini-tour” where I would spend a week at a time going to different cities for a combination of bookstore signings and theater screenings of the animated Last Unicorn, with Q&A sessions beforehand. On the writing side I’m busy making a transition from my recent focus on short fiction—over seventy new stories in the last five years—back to book-length fiction and nonfiction and movie scripts. To do that I first have to finish another dozen or so short stories and novelettes that I’ve started for different magazines, anthologies, and a set of mini-collections from Conlan Press. The Schmendrick set is one of those, but there’s also going to be a three-story Shakespeare set, and a set of six original unicorn stories set in very different times and places. When those are done I’ve got two novels that need one more polish before they can go out the door, revisions to complete on the re-releases of The Innkeeper’s Song and The Folk of the Air, and then I really do feel like spending most of the next few years on bigger works. There’s also the possibility of some original theater writing, something I haven’t done since college, and of course the pleasure of seeing various things of mine come out in graphic adaptations. IDW’s version of The Last Unicorn premiered at number two on the New York Times Graphic Books bestseller list—that was a kick—and there are half a dozen other comics and illustrated books in the works. I never thought I’d be busier than ever as I snuck up on turning seventy-two, but that’s the case, and I wouldn’t have it any other way.