In this week’s Author Spotlight, we ask author Tim Pratt to tell us a bit about his story for Fantasy, “The Secret Beach.” 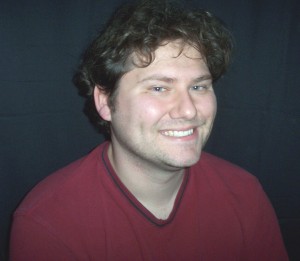 What inspired “The Secret Beach”? Could you tell us a bit about your writing process?

I was out for a walk in my neighborhood in Berkeley earlier this summer, pushing my young son in his stroller, when I saw two teenagers on the sidewalk in a residential area, dripping wet, with beach towels draped around their necks. I’m sure they were just at a pool somewhere, but my mind began wandering, as it does, and I thought about how interesting it would be if there were a portal to a beautiful beach somewhere, in the bushes or in the backyard of an empty house. My son ended up falling asleep in the stroller, so I stopped at a park, sat on a bench, and wrote the first draft of the story while he slept.

In “The Secret Beach” the protagonist struggles with fate. He suppresses the dreams that would lead him to the beach but finds himself there anyway. He has no recollection of needing a key but carries one with him. When he finally discovers his role in events, he steals another’s fate. How much free will do you think people exercise in their lives?

A deep philosophical question! I tend to think free will is an illusion. Neuroscience tells us that we actually decide to do things before our conscious minds can come up with the reasons why we’re doing them—most behavior is simply impulse followed by rationalization. As time is just another dimension, the “arrow of time” that we perceive as “forward” motion in our lives is illusory: Whatever happens is the only thing that can possibly happen. (Though it’s possible that every other thing happens in another universe; or that, if our own universe is infinite, everything that can possibly happen does happen somewhere out there in the vastness of space.) But life is only manageable, and society can only function, if we act as though humans have free will. And it’s certainly a convincing illusion! It sure feels like I’m deciding to do things consciously, and on a daily basis I don’t interrogate that feeling too closely … but sometimes I wonder. (Being a hard determinist is kind of depressing anyway, however compelling I find the arguments; I’d rather be a sustainable hedonist.)

At the same time, I don’t believe in fate or destiny—destiny doesn’t even work in this story, at least, not the way the poor dreamer on the beach expects it to. Nothing is meant to happen; things just happen, and we invest those events with meaning ourselves. That’s part of what humans do: find patterns and create meaning. (And readers kind of like it when characters have some kind of motivations, and appear to possess agency.)

If pressed, I’ll admit that I think the universe is a blind clashing indifferent machine. But it’s also often a beautiful machine.

How do your dreams influence you? Do you draw inspiration from them for your writing?

I seldom take inspiration from dreams. My dreams are pedestrian: anxiety dreams of rotting teeth and endless corridors and uncontrollable cars, euphoric dreams of flying, the occasional bit of sex. Sometimes a striking image occurs and stays with me until I wake up. I have a story coming out in an anthology next year, “The Carved Forest,” that takes its central image from a dream, but that’s a rarity for me.

You are now self-publishing your Marla Mason series. How does serializing the novel impact your writing process? How do you like having financial oversight of the project?

I’ve done a couple of serials in the past few years, and have something resembling a regular process now. I like to get at least six or eight chapters ready before I start, so I have a good sense of where the book’s going before I begin to post weekly chapters. (The inability to go back and revise substantively once a chapter is posted always weighs on my mind.) As long as I can stay a few weeks ahead of my posting schedule, I don’t stress myself out unduly, and there’s a nice energy to writing live without a net. But for my next serial, Grim Tides, I hope to have the whole book written before I start posting chapters in January 2012. (We’ll see if I manage to get it done.)

Doing reader-funded books is interesting. For my first two serials, I just asked for donations, and the response was great. For Grim Tides, I did a Kickstarter fundraiser, essentially to see if I could get paid up front, and that worked well, too; I met my funding goal of $6,000 in about 13 hours, and was soon over-funded. My readers are incredibly generous, and I’m delighted that the internet has made it possible for me to continue the series for those fans who love it, even if the audience isn’t necessarily big enough to justify a major publisher continuing to publish the books.

Oh, many things. My standalone contemporary fantasy Briarpatch is out this fall from small press ChiZine Publications. Next year I have a couple of roleplaying game tie-ins coming out—sword and sorcery! One called Venom In Her Veins, and one called City of the Fallen Sky.

(Both were ridiculously fun to write.) I plan to start serializing the next Marla Mason novel Grim Tides in early 2012, and I just signed contracts for a gonzo-historical steampunk-ish novel that doesn’t have a definite title yet. Wow. I don’t think I realized how busy I was before I wrote all that down!