I thought this story was so inventive, with its self-conscious references to the heroic narrative and its blending of genres. What inspired it?

I thought the interweaving of commentary on the video-game terminology was fascinating—it was my first intimation that there was something more going on in this story.

What prompted this device?

I had a sudden fierce urge to write some tie-in fiction—for Star Wars, or a Bioware video game, something like that. But since I’m just about the last the author likely to be chosen/approached for such a project, I quickly realized I’d have to make up my own media property if it were to happen at all: thus, the video game Kaiju maximus®. It nearly broke my mind—in a fun way!—trying to tell a straight-ahead genre story as tie-fiction for a media property that doesn’t exist.

Even playing in my own sandbox, it didn’t strike me as realistic that I’d be assigned to tell the story of, say, the emigrée cosmonaut who flew a billionaire’s privately-built lunar shuttle into orbit and nuked the alien mothership, or the story of the first North American superhero, a Chicano fry-cook, who fought so bravely at the fall of Chicago. Those epic, flashier stories would certainly go to big-name authors, I thought. Still, the editor might give me a chance with some NPCs; so that’s the story I wrote.

If I’m not mistaken, the hero is given a name, but she’s primarily referred to as “the hero.” Why include this distancing mechanism?

Actually, the hero’s name never comes up. And instead of a consciously applied distancing mechanism, I omitted her proper name as an intuitive choice. Trying to analyze it after the fact, however, I’m sure the choice owes something to my hating the way video games and movies of the genre to which Kaiju maximus® belongs tend to restrict the primary woman character to the role of “the girlfriend” or “the wife.” Might metonymy be used to different effect? And, too, I think it encourages the reader to view the hero as the family does, and as the hero experiences herself: identity completely subsumed by her mission and responsibility. None of us, after all, is expected to redeem the planet single-handedly!

In googling you, I couldn’t find a tremendous amount of information—not even a capsule bio. Is this purposeful? And is there anything you want to say about your background and what sort of things you write? Are you working on anything right now?

In the age of the internet, I definitely should be holding self-promotion very high among my priorities as a writer. But being dead broke and painfully shy makes sure that it keeps falling off the list. I’ll get around to a webpage someday.

The five stories I’ve had published so far testify pretty well, I think, both to my background and writerly concerns: black, queer, and since the popular media hardly ever depicts any life I recognize, I’m interested above all in telling the kinds of stories usually dismissed by majority concerns, the sorts of stories that have gathered so much silence and neglect around them, I necessarily struggle to find the right, illuminative language.

The writing’s just not coming at the moment, so I’m a reading a lot and trying to encourage a couple new writers I know and admire to stay the course, and see their projects through. 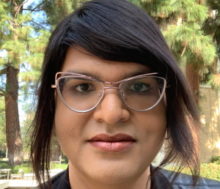 Naomi Kanakia’s first book, a contemporary young adult novel called Enter Title Here, is coming out from Disney-Hyperion in August 2016. Additionally, her stories have appeared or are forthcoming Clarkesworld, The Indiana Review, Apex, and Nature. She holds an M.F.A. in Creative Writing from Johns Hopkins and a B.A. in Economics from Stanford, and she used to work in the field of international development. Originally from Washington, D.C, Naomi now lives in Berkeley. If you want to know more you can visit her blog at blotter-paper.com or follow her on Twitter at @rahkan.