Welcome to Fantasy Magazine! We’re so happy to be able to bring your story, “Queen of the Wilis,” to our readers. I really want the readers to learn more about what inspired you to write it in the first place and what made you choose this specific title for this story?

First of all, thank you so much! I am absolutely thrilled to be published here. This was actually my first ever submission to Fantasy Magazine and it couldn’t have gone better, I’d say.

This story came together from several sources of inspiration—the ballet Giselle itself, of course, as well as the 1920s song “Pirate Jenny” from the The Threepenny Opera, by Kurt Weill and Bertolt Brecht in collaboration with Elisabeth Hauptmann. Both of these are excellent revenge stories—highly recommend! I’d also recently learned more about the extremely exploitative nature of the lives of young ballet girls in 19th century Paris, when the ballet Giselle debuted. I love writing historical fantasy, so all these things brewed together nicely into a revenge fantasy of my own.

Ultimately, though, I wrote this story because of my grandfather. He was a fierce and loyal lover of the ballet his entire life, and I went to every show with him right up until the pandemic shut everything down. This was the first acceptance I received after he passed recently at the age of 93. It felt meant to be.

I chose the title because I wanted to centre this story from the perspective of Queen Myrtha from the ballet Giselle. In that story, Giselle dies after her true love betrays her, and she joins the ghostly, spirit-like “Wilis”—other dead young women who were all betrayed by men in life. Queen Myrtha is their leader, powerful, cold, and a clear counterpoint to the sweet young Giselle. (And way more interesting to me!) What would it be like to know that all the girls you love and care for, are responsible for, have suffered and continue to suffer so much? What angry thoughts must be going through your head?

There is an interplay between the first and second POV. What made you choose this dynamic as the right fit for this particular story? What do you think the story was able to achieve owing to this, particularly the second-person POV?

“Pirate Jenny” is in second person, as is a lot more common in songs, but surprisingly controversial in short stories! That was my jumping off point. But it works so well because, to my mind, it mimics that feeling we have when we’re trapped in a bad power dynamic, talking to someone who has all the power to give or take away what we desperately need most, and who isn’t afraid to abuse it, and all we can do is shut our mouths except to say, “How high?”

But inside—now that, they can’t control. On the inside, we’re saying exactly what we desperately wish we could say to their face, but can’t.

At least, not yet. That day will come.

The story’s ending, which was such a twist, turns a power equation upside down. Could you explain to us why that ending was in place? Was this intentional, or did you encounter it as you wrote along?

Well, first, spoiler alert! Second, I mean, turning power dynamics upside down is pretty much my jam, so you may spot this theme in more of my writing than just here.

But I knew from the start that this would be a revenge story, where the men who are sexually preying on young girls—represented in particular by the one unnamed “gentleman” Myrtha fixates on—would get his comeuppance. The fact that it would be Giselle who seals his fate, at first hesitant but growing more confident in her choice as she goes along, came to me as I wrote.

In the original ballet, Giselle resists joining the Wilis, who dance to death any man who is unlucky enough to get too close to their forest at night. While the Wilis successfully dance one of Giselle’s suitors to death, Giselle ultimately rejects their way of life and saves her true love from a similar fate, forgiving him for his betrayal and returning peacefully to her grave instead of living on as one of them.

Well, fuck that. What if Prince Albrecht really, really deserved it? And what if they were never really in love at all—that it was an entirely one-sided and harmful relationship? In my story, Giselle chooses her new family, the Wilis, over saving a man who repeatedly hurt her. Queen Myrtha is very proud.

While in real life I do not condone dancing anyone to death, no matter how deserving, I do believe in the power of found families to help people leave very difficult situations.

On a sentence level, I can see that the language is crisp, filled with pregnant imagery and suggestive language. How have you built this kind of craftwork? Besides this, I see that you have used italics for French words mostly but sometimes English ones too. Could you tell us a bit more about that craft decision?

Why, thank you! At different points of my learning journey, I’ve focused more on sentence-level prose, while at others on the critical points of storytelling. I try to keep adding more tools to the toolbox, so to speak, to be used as needed.

I have a bachelor’s in Creative Writing, which I appreciate for all the structured time it gave me to write, but it was very focused on literary fiction. Genre writing was tolerated, but there was absolutely nothing genre-specific in any of the classes I took. (Nothing about the business side of writing, either, but that’s a rant for another day.) So, for a long time, I mostly wrote literary fiction, too.

Thank goodness I eventually realized that kind of snobbery was all BS, and that I could write the most imagery-laden, metaphor-filled fantasy story if I damn well pleased. And that maybe, some stories are better served with simpler language and a stronger focus on character, emotion, and plot. It all depends.

In general, I love learning about storytelling and craft. I read a ton, take online workshops and courses, and try to write a little every day to keep my head in that writing space (although I often fail at this, too!) I hope to still be learning as I force my arthritic fingers across a floating VR keyboard in my dying days.

For the English words in “Wilis,” I luxuriated in my use of italics to help convey all the pent-up energy and emotion going on in Queen Myrtha’s head, even as she smiles politely to the gentlemen before the show. I wanted to create a taut sense of foreboding that builds as the story progresses, even as everything on the surface seems relatively benign—hopefully setting the stage (hah!) for later.

What are you working on now, and are there any other projects we can look forward to seeing from you in the future?

I want to use “Wilis” as the starting point of a series of historical fantasy stories based on classic ballets, starting with a retelling of Coppélia mashed up with the history of Barbie set in post-war Germany. My grandpa gave me a lot of ballet books when I was younger, so I grew up reading ballet stories like they were fairy tales. The Coppélia story is already written in first draft, so I should probably get back to it soon, eh?

I’m also very excited to have a fantasy story coming out this fall from Podcastle as part of their “Indigenous Magic” call, based on some of my Nation’s (I am Red River Métis, an Indigenous people that originally began through the intermarriages of mostly First Nations women and French or Scottish settlers) history when it comes to “bone picking”—clearing the prairies of the half-buried skeletons of bison after they were almost all killed off in the late 1800s. It was an incredibly sad time in Métis history, since so much of early Métis identity as a people was centred around the buffalo hunt.

Plus, I also write a lot of space opera—mostly imagining Métis and other Indigenous peoples in a space-exploring future. So there are a few things coming down the pipeline! 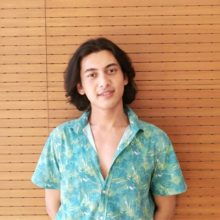 Mayookh Barua is a North Carolina-based writer from India who identifies as a proud queer man. His areas of focus mainly lie in and around art, queerness, cinema, and the politics of a family. He has previously published at Crooked Fagazine, Mezosfera Magazine, and District-Berlin.