It’s been thirteen years since the Way to Bordertown mysteriously closed. But now editors Ellen Kushner and Holly Black have re-opened it to us with Welcome to Bordertown, a new entry in the venerable and influential shared world urban fantasy anthology series.

This new Bordertown anthology, based in the city of music and magic created by Terri Windling, allows new blood such as Tim Pratt, Janni Lee Simner, Amal El-Mohtar, Cory Doctorow, Nalo Hopkinson, and Christopher Barzak to stride down Mock Avenue, have a beer at The Dancing Ferret, and get their groove on in Danceland alongside such Bordertown veterans as Kushner, Delia Sherman, Emma Bull, Will Shetterly, Charles de Lint, and Steven Brust. It’s a hell of a mix, and fans of Bordertown have been wishing and hoping for such a thing to happen since the publication of the last B-town anthology (The Essential Bordertown) back in 1998.

So how did this come about? I talked to some of the editors and writers who have worked in the Borderlands to find out.

“Actually,” Kushner says, “it was Holly [Black] and I who went to Terri [Windlnig] with our bright idea of reviving Bordertown! We thought that, with the huge popularity of urban fantasy, it was time to bring young readers back to the Border—to introduce them to the place where it all began. Terri took some persuading; she wasn’t sure it would fly. But meetings were held, letters were written, brains were stormed … And for us, it was a very exciting moment when Terri Windling agreed to entrust us with her wonderful creation.”

As for how Bordertown veteran Ellen Kushner chose post-Bordertown generation author Holly Black to co-edit the new anthology, “It was at a bar, of course,” she said. “Holly and I were at the ALA [American Library Association] conference in DC, and I overheard her agent, Barry Goldblatt, telling Holly’s editor how important and influential Bordertown had been to an entire generation of urban fantasists, Holly included. As someone who’s been in a small writers’ group with Holly for a while now, I know what a brilliant reader and editor she is …. So I leaned across her martini, and asked if she’d want to revive Bordertown with me. And then I ate her lemon peel.”

Holly Black confirms Kushner’s story: “I’d had some scotch. I was ordering more. An editor had accidentally poured white wine down my dress, so I was a little bit damp. And Ellen said something about editing a new Bordertown book with her, if Terri was up for it. Me? I may have said something about being willing to crawl over broken glass to write a story for it. But editing it? Was she serious …? I was excited and sort of terrified too, because it was Bordertown. It meant so much to me that I was rendered inarticulate … It’s been an exhilarating ride and it’s going to be just as fun to watch as readers get to revisit such a beloved place—or discover it for the first time.”

Delia Sherman co-edited The Essential Bordertown with Terri Windling, and was overjoyed see Bordertown return. “As a writer, I came to Bordertown late, not until The Essential Bordertown, in fact, but I hit town with a bang. I’d read all the previous books as they were published, and I loved them unconditionally. Bordertown always felt like a real city to me—the ones with neighborhoods where you feel at home and those you’d rather not set foot in, even in daylight—and I dreamed of visiting there someday, maybe exchanging a few words with some of the locals.”

Along with so many fans, she was deeply saddened by the loss of Bordertown. “Then the Border closed, and most of the collections went out of print, and I felt as if I’d been evicted.” So when this anthology brought Bordertown back “I stuck rowan and oak in my hair and hung out on crossroads (metaphorically speaking) and hoped for the best. And it happened: I was asked for a poem. And I wrote one, even though I’m not really a poet, and I didn’t know what I was going to write about before my pen (yes, I still write with a pen) hit the paper … Boy, I’m glad to be back.”

When one thinks of urban fantasy and Bordertown in particular, there are certain authors who come to mind immediately. Clearly the originating Bordertown authors have all had an immense influence on the entire urban fantasy genre. One might think of newer urban fantasists such as Catherynne M. Valente, Seanan McGuire, or Tanya Huff as potential B-town authors, and in fact, Valente does make an appearance in this anthology. So who did the editors of this anthology think of that fans might not have immediately called to mind as a “typical” Bordertown writer?

“I’d say Cory Doctorow,” Kushner says. “In a way, he’s the reason this whole anthology exists in the first place. I was at a riotous Thai dinner at Worldcon with him and John Scalzi and a host of other reprobates, when suddenly Cory leaned over to me and said, ‘You know, I loved Bordertown when I was a teen. I read those books over and over, and they really influenced my work.’”

“I was amazed,” Kushner continued, “But when I read his next novel, I started to see what he meant: It’s there, the DIY spirit, the joined community of wild individuals coming together as an almost sacred tool for something bigger than itself, it’s such a Bordertown ethos.”

And so Cory Doctorow is indeed one of the authors in the anthology, with a story mixing computer and Internet technology with the magic of the Border (which works in the way that longtime Bordertown readers will expect, which is to say, weirdly at best.) And he really does have a fascinating take on B-town.

“I read the B-town books when I was an adolescent,” Doctorow says, “and for me, they conjured up a world in which magic felt plausible—the fact that magic and physics were both erratic in the Borderlands made magic something more tangible somehow, and I lost myself in the story.

“Bordertown also delighted me by being a place where magic was (or could be) counterculture,” he says. “It wasn’t something undertaken by solemn mages or cackling witches; it was something that punky kids with ill-advised ink and piercings did while they were high. At fourteen or fifteen, this was an idea so mind-blowingly awesome that I couldn’t let go of it.”

“The widespread adoption of personal computers killed computer-as-metaphor,” Doctorow says. “We all know what computers do too well to treat with them as black boxes capable of anything. But Welcome to Bordertown created the possibility of a story where networks and computers were magic, were counterculture, were erratic like the best of Bordertown.”

Will there be more computers and faeries, music and magic, elvin Knights and Halfie rock stars, more of this exuberant mix that is Bordertown? Fans can only hope. Bordertown vet Charles de Lint, for one, was delighted to return.

“Having already done two novellas and a short story set in the city itself, this time I thought I’d spend a little time exploring how my character Joey got there,” he says. “It takes a little while, and I was thoroughly enjoying his journey, but I have to say that I had a special moment of happy satisfaction when I finally followed him back onto those familiar streets.

And where will it go from here? “You’ll have to ask Holly and Ellen, the new caretakers, de Lint says. “Considering how well this book turned out, I can only assume they will take us somewhere special should there be a subsequent volume.”

Certainly the fans hope so, because this little shared world that Terri Windling developed back in 1986 has influenced both a genre and a generation of genre authors and readers, and the excitement over this new anthology is clearly shared by readers and authors alike. Bordertown’s back, baby, so grab your bags and hit the yellow brick road, and remember the first beer is free at the Dancing Ferret. 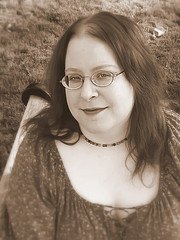 Mia Nutick is a writer and artist from Portland, Oregon. Her reviews and nonfiction articles have appeared in Realms of Fantasy, Faerie magazine, Witches & Pagans magazine, and the Green Man Review. Her fiction and poetry has appeared in Cabinet-des-fees, Mytholog, EOTU, The Eloquent Umbrella, Jabberwocky III, Chizine, and the anthology Ravens in the Library. She sells poetry jewelry online as Chimera Fancies. She’s been traveling back and forth to Bordertown since college.