Let’s be clear about one thing from the start: A wolf is not a dog. The idea that the two are the same is understandable, what with them being able to mate and produce fertile offspring, but regardless of what Jack London (or, for that matter, Cesar Millan) would have you believe, a wolf is a wolf, and a dog is a pet. The gap between them is a wide one, made wider every year by breeding. The genes they share give them many of the same capabilities when it comes to recognizing human communication, but they have a radical difference in motivation. A dog will attune itself to human attempts at communication because it wants a relationship. A wolf just wants to understand what’s going on.

Dogs establish a communicative relationship early. Ethologists, animal behavior experts, demonstrate the difference between dogs and wolves by presenting the two species with a task: to extract a piece of meat from a cage. The cage is designed so it’s impossible for either species to do so without human intervention, and after a few quick tugs and prods, dogs will invariably look to their human companions with an expression that unmistakably reads, “Give me a hand here, won’t you?” When they run into difficulty, their instinct is to communicate a request for help.

But not the wolf. She will circle the cage, knock it over, and inspect it for structural flaws. She will not look to a human, even a friendly human, to open it. Put next to a dog, the wolf is the model of self-reliance and intellectual curiosity. It doesn’t matter whether the wolf is raised by hand or in the wild; left in your house she will tear open the walls searching for the source of a television broadcast while your dog happily watches reruns of Dora the Explorer.

This doesn’t mean that wolves aren’t remarkably attuned to human communication. Our nearest cousin, the chimpanzee, cannot comprehend the meaning of a human’s pointing gesture. If a researcher presents a chimpanzee with two overturned cups, one empty and the other concealing a tasty treat, and points to the treat-laden cup, the chimp will ignore the gesture, selecting a cup at random. Though dogs and human-reared wolves respond to human pointing gestures imperfectly, they still perform significantly better than random chance. Although chimpanzees have a whole range of gestures that they learn with each other and have been known to approximate American Sign Language, this simple gesture eludes them, even when food is on the line. Perhaps that is one of the reasons ancient humans invited wolves beside their fires: They saw a cognitive kindred spirit, one who could understand their most basic communications, and all the better that it came with warm fur and sharp teeth.

Filtering Out the Lies

Of course, what a wolf is capable of and what it is naturally inclined to do are two entirely separate things. A 2009 study published in the journal Public Library of Science One found that while adult human-reared wolves performed as well as dogs in a certain pointing exercise, four-month-old wolf cubs perform significantly worse than similarly aged puppies. Not only that, the wolf cubs are slow to make eye contact with the person doing the pointing. A wolf can be trained to understand what you’re trying to convey, but it’s not in her nature to pay attention.

And why should wolves listen to us? After all, human communication can be confusing and deceptive. If a human shows a dog that he is hiding a desirable object in a certain location—let’s call it Location A—over and over again, then he is conveying to the dog that Location A is where the object lives. If the human then hides the object in a new location (Location B) while the dog is watching, the dog will frequently go to Location A to look for the object. They put their trust in what they were taught by the human, not what they see the human doing.

Dogs make this mistake more often when the human gives communicative signals when hiding the object in first Location A then Location B—such as saying the dog’s name and making eye contact—than when the human offers no communicative signals, suggesting that dogs believe what humans tell them over their own observations. Human infants, with their constant drive to puzzle out what adults are telling them about the world, tend to make the same cognitive mistake; human-reared wolves do not. The wolf’s innate inclination to ignore human social cues focuses her attention on what is actually happening rather than what we are trying to convey. They go to Location B, and never mind what they’ve been told.

Only Dogs Talk Back

Even in those instances where wolves listen to us, they may not have much to say in reply. In addition to their keen attention to human speech and body language, dogs developed their own signals for communicating with their human companions. Most dog owners are very used to having conversations with their pets. Dog barks are a language unto themselves, one that humans can recognize given enough time and experience. Dog owners can listen to recordings of dogs barking—dogs they’ve never encountered in their lives—and correctly identify the barks as a warning, an invitation to play, or a demand for food. But dogs don’t only communicate the necessities. To deepen their relationship with humans, dogs use everything they have. They make eye contact with us, wag their tails, and utilize other clear communicative signals. When they want to go out, they’ll stand by the door. When they want a walk, they’ll grab their leash. When they want food, they’ll flip their dishes. All of these are attempts to get humans to understand what’s on their minds.

The wolf is, by contrast, a sphinx. Barking is a rarely used skill among wolves. Even when wolves bark it’s a quick, sharp noise that’s a far cry from the prolonged, rhythmic barking we associate with dogs. They don’t want human attention, or help. They just want to pass quietly by. Perhaps that is part of our fascination with these creatures: They possess some ability to understand us, but little interest in being understood. A dog will tell you what is on her mind; to learn what is on a wolf’s mind, we must do much more than merely listen. 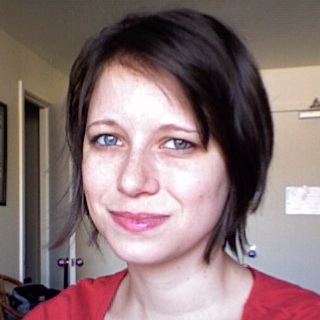 Lauren Davis is a freelance writer and editor living in Berkeley, California. She collected and published The Comic Book Guide to the Mission, an anthology of comics about San Francisco’s Mission District, which came out this earlier year. When she’s not blogging about webcomics or harassing cartoonists, Lauren has intense conversations with her three-year-old Boxer, mostly about the location of his favorite squeaky toy.