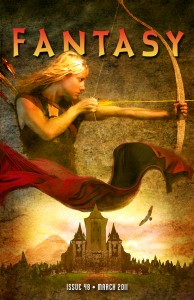 Welcome to issue forty-eight of Fantasy Magazine—and the first edited by me, John Joseph Adams. I’m excited to join the Fantasy Magazine team, and I’ll be doing my best to maintain the high standards established by Fantasy’s previous editors.

Speaking of which, for the last three years, Fantasy Magazine has been edited by the team of Sean Wallace and Cat Rambo. Sean, who is also the publisher of Prime Books and Fantasy Magazine, will stay on as publisher but will be stepping down as co-editor. Cat, meanwhile, will be stepping down in order to focus on her writing, which should be a cause for celebration, as she’s quite a talented writer (one I’ve published twice over at Lightspeed).

Starting with this issue, all the fiction you read in Fantasy Magazine will have been selected and edited by me. But that won’t be the only change. By now, I’m sure you’ve noticed the site’s redesign, done by web-wizard Jeremiah Tolbert. And we’ve also brought a new nonfiction editor on board, Esther Inglis-Arkell, who will be working hard to bring you the best articles and interviews pertaining to the fantasy genre.

So we’ve got a new look and a new editor, but also a new publishing approach—one that brings Fantasy in line with our sister-publication, Lightspeed. Like Lightspeed, every month Fantasy will:

(If you’re looking for older content from Fantasy, fear not, it’s all here! It’s all still accessible via the search box located in our banner, and we’ll have it all listed in its respective categories soon. Also, all your old bookmarks should still work, so if you follow an old link, it should still take you to the story or article you’re looking for.)

In “The Sandal-Bride,” Genevieve Valentine gives us a quiet tale of a traveling spice merchant who learns his desert trading route is actually fertile ground for amazing stories—once one lonely woman teaches him to listen.

Hardship and long journeys are the features of our article “Three Historical Figures Who Embarked on the Hero’s Journey,” where Graeme McMillan digs into the lives of three fascinating world-travelers. Sometimes truth really is more remarkable than fiction.

In Holly Black’s “The Dog King,” the nobles of Dunbardain revel in the pageantry of wolf-fighting and wolf-themed regalia. But when it comes to court intrigue, it becomes clear that while a dog might be man’s best friend, a pet wolf is nothing but trouble. (Reprint)

Ever dreamed you could slip inside your favorite fantasy novel and live out a more exciting life? Te Jefferson & J. Corbeau might convince you otherwise in their article “Five Fantasy Worlds that Prove You Never Want to Enter a Fantasy Realm.”

Most people are willing to accept the fate the gods deal them. But in Tanith Lee’s “The God Orkrem,” injustice spurs one man to confront his very creator.

With February’s release of The Crippled God, Steven Erickson has concluded his Malazan Book of the Fallen series, a twelve-year adventure whose creation was an adventure in itself. Andrew Bayer presents this month’s feature interview with the epic fantasist.

Loss drives the heroine of our next tale, George R. R. Martin’s “The Lonely Songs of Laren Dorr,” to travel between worlds and across years.  But when she meets Laren Dorr, his heartbreak and melancholy touch her in surprising ways. (Reprint)

LaShawn Wanak turns our attention to stories and the remarkable ways they can be reshaped and retold in her article “From Story to Screen.” Find out how some of your favorite books and tv shows were literally re-envisioned in their silver screen incarnations.

That about does it for our fiction and nonfiction selections for March, but be sure to also look for our author and artist spotlights, and keep an ear out for our podcasts of “The Sandal-Bride” by Genevieve Valentine and “The Lonely Songs of Laren Dorr” by George R. R. Martin, along with a resyndication of Podcastle’s production of Holly Black’s “The Dog King.”

So that’s our issue this month. If you don’t want to wait for the content to be released on the site throughout the month, or if you’d just like a handy, downloadable version of the magazine on your favorite reading device, you can now purchase ebook editions of Fantasy, which are available directly from our publisher, Prime Books, in DRM-free ePub format, and in a variety of formats from a variety of third-party channels, including: Kindle, iBooks, Nook, Smashwords, Sony Reader, Fictionwise, Wizard’s Tower, and Weightless Books. Or, if you’d prefer to subscribe, you can do so via Weightless Books.