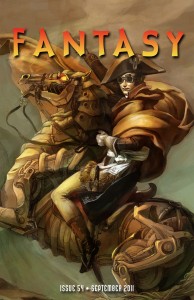 The big news at Fantasy HQ this month is that your humble editor has been nominated for two World Fantasy Awards! My anthology The Way of the Wizard is a finalist for best anthology, and I personally am nominated in the “special award (professional)” category. So, congratulations, to … well, me, I guess! And of course to all of the contributors to The Way of the Wizard, and everyone who I’ve worked with over the past year that made both nominations possible.

Even when things are working just like clockwork, sometimes there is still room for error—and even love. Megan Arkenberg creates a magical realm that’s ready to teach “Lessons from a Clockwork Queen.”

Beneath the smog and grit, David Brothers looks at the steampunk genre and sees a cleaner, kinder sort of world. Find out why in his article “Steampunk and the Architecture of Idealism.”

Ever get tired of all the annoying chit-chat going on around you? In Jonathan Lethem’s story, “Using It and Losing It,” one man discovers a permanent escape from the rigors of conversation.

Most Americans only take foreign languages because their school makes them. But in the wide world of science fiction and fantasy, it pays to know more than just English! David Salo researches the role of created languages in genre fiction in his article “The Language of Fantasy.”

In Carrie Vaughn’s “The Nymph’s Child,” a mother wonders if she can discourage her daughter’s dreams of piracy and adventure—because she knows firsthand what heartbreak life on the high seas can lead to.

Every wonder just why being a pirate is so great? In their article “Ten Reasons To Be a Pirate,” John Baur and Mark Summers, the creators of International Talk Like a Pirate Day, explain just why a pirate’s life is for just about everybody.

Sometimes we’re condemned to repeat the same mistake over and over again. James Alan Gardner paints a genre-blurring image of temptation and regret in “Three Damnations: A Fugue.”

In our feature interview, Leigh Butler talks with bestselling author Brandon Sanderson about finishing Robert Jordan’s Wheel of Time, what makes an epic epic, and Sanderson’s laws of magic.