Feature Interview: Sky’s (Not) the Limit: The Ascension of N.K. Jemisin

In just a few short years, N.K. Jemisin has gone from a promising new fantasy fictionist to an author on the verge of superstardom. Her short story “Non-Zero Probabilities” (published in Clarkesworld Magazine in 2009) was 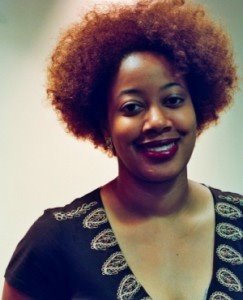 nominated for both the Hugo and Nebula Awards and her debut novel The Hundred Thousand Kingdoms—the first installment of her Inheritance Trilogy—was released in February of 2010 by Orbit Books to critical acclaim. Publishers Weekly gave it a Starred Review and described it as “engaging” and an “edge-of-your-seat story.” Booklist called it a “complex tale of politics, assassination, racism, and gods too intimately involved in the lives of humans” and a “notable authorial debut.” It was also listed on numerous elite “Year’s Best” lists, including PW, Library Journal, Amazon, and BarnesandNoble.com.

The Hundred Thousand Kingdoms revolves around Yeine, the estranged granddaughter of the head of the Arameri family and “uncrowned king of the world.” Born and raised in a remote northern kingdom, Yeine is summoned back to the majestic, towering city of Sky—also the location of the floating palace of the Arameri family—shortly after her mother dies under mysterious circumstances. Named an heir to her grandfather’s throne, she finds herself in the middle of a viper pit of scheming relatives, enslaved deities, self-absorbed nobles, and a labyrinth of bloody family secrets. When she realizes that she is a pawn in a much larger game—one where the salvation of humankind may very well be in the balance—she must make the unthinkable decision about how best to use her death…

With the 2010 Nebula Awards nominees recently announced, Jemisin—whose The Hundred Thousand Kingdoms was nominated for Best Novel along with M.K. Hobson’s The Native Star, Mary Robinette Kowal’s Shades of Milk and Honey, Jack McDevitt’s Echo, Nnedi Okorafor’s Who Fears Death, and Blackout/All Clear by Connie Willis—finds herself in line to become the very first woman to win the Nebula Award for her debut novel. In fact, since the Nebulas began in 1965, only four authors have ever accomplished this feat—Daniel Keyes (Flowers for Algernon), Alexei Panshin (Rite of Passage), William Gibson (Neuromancer), and Paolo Bacigalupi (The Windup Girl). (The odds are very good that history will be made this year—Hobson’s The Native Star and Kowal’s Shades of Milk and Honey are debuts and although Okorafor has published young adult novels, Who Fears Death is her adult debut.)

So why has Jemisin’s ascension to the fantasy fiction stratosphere been so meteoric? It’s simple—she is a master storyteller. Her first two novels (The Hundred Thousand Kingdoms and The Broken Kingdoms) are intricately plotted, meticulously described, and are powered by a cast of extraordinarily developed characters. The heroines of both novels (which can, by the way, be read as standalone novels) are as inspiring as they are unforgettable—the unlikely heiress Yeine and Oree Shoth, a blind artist whose benevolence entangles her in a deadly conspiracy.

“I am not as I once was. They have done this to me, broken me open and torn out my heart. I do not know who I am anymore.

I must try to remember…”

Try to put this book down after the first page—I dare you.

But although Jemisin writes an entertaining and immersive story, it’s the philosophical element that makes her novels so substantial, so memorable. The narrative, at points, verges on profound existential enlightenment. Here are just a few examples:

• “You’ve spent time among the gods … Haven’t you noticed? They live forever, but many of them are even more lonely and miserable than we are. Why do you think they bother with us? We teach them life’s value.” —The Broken Kingdoms

• “There’s truth even in tainted knowledge, if one reads carefully.”—The Hundred Thousand Kingdoms

• “It’s all very well to say the world values reason and compassion and justice, but if nothing in reality reflects those words, they’re meaningless.” —The Broken Kingdoms

• “We can never be gods, after all—but we can become something less than human with frightening ease.” —The Hundred Thousand Kingdoms

• “…if the gods do decide to wipe us out, is it such a bad thing? Maybe we’ve earned a little annihilation.” —The Broken Kingdoms

Regardless of whether Jemisin wins the Nebula or not, it’s evident that she is one of the most original and talented new writers in the genre—and fantasy fans will be reading her work for many years, many decades, to come.

With the Nebula Awards ceremony looming—it will be held May 19-22 in Washington, D.C.—Jemisin took time out of her hectic schedule to answer some question for Fantasy Magazine.

NKJ: I was at work, on an insanely busy day, actually. I’d just managed to carve out about 20 minutes to cram down some lunch when my phone rang. I didn’t recognize the number, and was about two seconds away from giving somebody whatfor when a voice said, “Hi Nora, this is John Scalzi.” That was when I knew, and gave a quiet (’cause I was at work!) squee.

Since the first Nebula Awards were given out back in 1965, only four authors have won the Best Novel award with their debut: Daniel Keyes, Alexei Panshin, William Gibson, and Paolo Bacigalupi. If you win, you’ll be making history—doing something no other female SF/fantasy writer has ever done before—not Ursula K. Le Guin, Marion Zimmer Bradley, Vonda McIntyre, Margaret Atwood, Jane Yolen, Nancy Kress, Lois McMaster Bujold, Connie Willis, Kate Elliott, etc. What would winning the award mean to you?

Dude, you really know how to lay on the pressure.

Honestly, though, I can’t say that knowing this means anything more or less for me. For one thing, it’s not like the people who nominated The Hundred Thousand Kingdoms did so because I’m a woman, or because I’m a debut author. Plenty of both to go around, these days. For another thing, the Nebulas seem to be undergoing a kind of sea change in general; writer Jason Sanford has been doing a kind of qualitative analysis for the last couple of years, and has noted that the nominees lately are more demographically diverse, seem to hail from a wider variety of sources (e.g. online markets for short fiction, versus the paper Big Three), and are more “literarily” diverse. That is, there are more stylists than scientists, more subgenres (e.g. urban fantasy) on display, and so on. I think the whole slate of Nebula nominees probably reflects this.

You listed Octavia E. Butler as your “own personal grandmaster” in The Hundred Thousand Kingdoms and in an interview we did together last year said that she “left behind a lot of children, spiritually speaking” when we discussed the growing number of African American woman writing fantasy—Nisi Shawl, Nnedi Okorafor, Nalo Hopkinson, Tananarive Due, L. A. Banks, Sheree Thomas, etc. Do you think that’s one reason why your first two novels have been so commercially successful? Readers are enjoying the newness of different mythologies, futuristic ideologies, etc.?

There isn’t any newness here. Like I said—Octavia Butler started doing this stuff thirty years ago. And male and female black SFF writers have been around for decades; Sheree Thomas’s Dark Matter anthologies proved that by reprinting stories published as far back as the 1800s. So a black female SFF writer is nothing new. The SFF readership is just less prone to restrict itself to white men—but that’s not really new, either; it’s a change that’s been ongoing for some time now, both within and outside of the genre.

And yes, I think Butler’s persistence, and the persistence of her “spiritual children”—children of all races and genders, note, not just black women—has helped to facilitate this change. But I can’t see how that spells success for anyone who happens to share her race and gender. Usually, being black and female in this business is a recipe for diminished sales, as the writer’s work gets stereotyped and qualified and shoehorned into little boxes that keep it from getting the mainstream attention necessary to succeed. The Hundred Thousand Kingdoms has occasionally been found shelved in the African American Interest section, for example—despite the fact that it contains no Africans, no Americans, no black human beings at all, and despite the fact that most African American SFF readers are going to look for it in the SFF section—like everybody else.

So it definitely helps to be treated like “just another SFF writer”, and not “omg BLACK!!! FEMALE!1! sff writer”. Unfortunately we’re not 100% there yet.

I’ve found the first novels in your Inheritance Trilogy to be deeply philosophical and filled with existential wisdom. You said that the trilogy’s philosophy is “that change itself is irrelevant, because it’s unavoidable; how we deal with change is what matters.” How has your real-world experience as a counseling psychologist affected your writing?

Honestly, it’s impossible to say. Studying psychology, and working with clients in a variety of contexts, has had a huge impact on how I view the world, and that obviously impacts my writing. But then, so does every bit of knowledge I ingest, and every interaction I have with other people. I can’t really sift out one set of experiences from the rest.

The concluding volume of your Inheritance trilogy—The Kingdom of Gods—will hit bookshelves later this year. Can you give readers just a little tease as to the storyline?

Well, the protagonist of this one is Sieh, the god of childhood and mischief, whom we’ve seen before in the first two books of the trilogy. The story starts when Sieh meets a pair of mortal children—Arameri children—and suddenly, inexplicably begins aging at a mortal rate. Since Sieh’s “godliness” is dependent on him being a child, this means that the older he gets, the more human and powerless he becomes—and if he can’t manage to stop the process, he will eventually die of old age or some other mortal cause. Kind of a twisted bildungsroman: the coming-of-age of a boy who’s several billion years old, who’ll die if he grows up. There’s a lot more to the story than that, including a global revolution against the Arameri, and a godling trying to overthrow the Three. I had a lot of fun writing it.

What’s next after the Inheritance Trilogy? World domination?

Still working on that! In the meantime, I have two new novels, in a new duology, coming out in 2012—the Dreamblood books. They’re set in a fantasy realm that I modeled on ancient Egypt, in which a group of priests who wield magic based on sleep and dreams must defend their land against threats from within and without. Beyond that, who knows?

Paul Goat Allen has been reviewing science fiction, fantasy and genre fiction in general for almost two decades and has written more than 6,000 reviews for companies like The Chicago Tribune, Publishers Weekly, Kirkus Reviews, BookPage, and Barnes & Noble. He is also a moderator for BarnesandNoble.com’s Paranormal/Urban Fantasy and Fantasy/Science Fiction online book forums as well as a weekly contributor to BN.com’s Explorations and Unabashedly Bookish blogs.