Epic fantasy readers have gotten used to waiting for their favorite series to reach their promised conclusions—writing 600+ page novels takes a long time, especially the later one gets into a series. Delays have become something we’ve had to accept. But one author has managed to buck this trend in dramatic fashion. This February, Steven Erikson’s The Crippled God, the tenth and final book of his Malazan Book of the Fallen series, was published, wrapping up an amazing twelve years of regular releases of the books in the series, starting with Gardens of the Moon in 1999. All of the novels but Gardens of the Moon were written in that time, along with a few novellas in the same universe. The Malazan world, which Erikson created, along with his friend and fellow Malazan novelist Ian Cameron Esslemont, in roleplaying sessions decades ago, shows a level of worldbuilding detail rarely exceeded even in the fantasy field. It is deeply informed by Erikson’s background as an archeologist and anthropologist, providing a plethora of cultures as plausible as Tolkein’s languages.

We corresponded with Erikson in late January, before the release of The Crippled God, and asked him about the experience of writing such a massive series, as well as questions on his cultural creations.

How does it feel to be finished with a ten book series, one you’ve been writing for a couple decades? 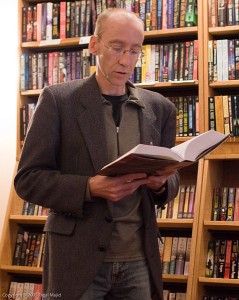 Even with Gardens of the Moon having been written in the early ’90s, your rate of output has been phenomenal, with nine hefty novels written in the last, what, twelve or thirteen years? How have you managed to not burn out on the Malazan world, given how much of your life you’ve now spent in it?

Each novel was a single chapter in a vast story, a mega-novel if you will, which made each of them integral to the telling of that grander tale. Also, I made a point of varying tone, structure, and voice—through multiple points of view, mostly—to define and make distinct the intent of each novel. Knowing where it all had to end up, there was never any sense of losing interest or burning out. Instead, my main battle over these years has been keeping my reins tight, the beast well collected beneath me, and not succumbing to impatience. If anything, the greater the pressure to rush forward, the more measured I became. But in all honesty, it was savage and it took a lot out of me.

Knowing that some of the characters and settings date back to your shared gaming world with ICE [Ian Cameron Esslemont] in the ’80s, I wonder how much those characters or the overall story have changed since you started work on the books. Have your characters managed to change the story as you’ve been writing it, or vice versa?

Using characters from our gaming campaigns always felt like returning to the side of an old friend. Now that being said, there was always plenty of room for fleshing out their backgrounds and personalities, and then moving them forward, beyond their static existence in our memories; beyond the game world, in other words. Roleplaying a character is, if done mindfully, a fictional exercise, but so much of roleplaying is nonverbal and subtle: all the things people do in a social situation. Writing them as characters in stories meant going back to those times and kind of deconstructing them, all with the benefit of hindsight, of course. It’s too easy to decide on a character and then stick to it through hell or high water; the truth of all people, real or fictional, is that they are malleable, often comfortable holding contradictions in thinking or belief, and on occasion entirely unpredictable. The gaming taught us to respect the willfulness of characters, so we were always ready to run with things. There needs to be room, always, for spontaneity.

You and ICE have so many characters and plotlines woven through all your books—how do you keep track of everything? How do you keep the continuity consistent, across your own books and ICE’s? How do you make sure you’re picking up all the loose threads?

Well, remember, much of that “history” was gamed together. Interestingly, we often do not remember those sessions in quite the same way; so a lot of our communication these days is to confirm our recollection of events.

Of course, so much of that gamed history ended up providing the foundation stones for the houses we started building: Plot-wise, and especially now with the later books, we were each free to invent and elaborate as we wished. The challenge then was in assuring that neither of us overtly contradicted the other. Most of our discussions relate to repercussions and resonance. We stand with a pool of water between us and toss in stones, then study how and where the ripples collide, cross, and create perturbations.

Finally, we’re not afraid of loose threads left dangling (how I adore this jumble of metaphors). Life’s like that, and so is history. There’s no real beginning and no real end; it just goes on (until it becomes something else).

Following up on that, the timeline for the Malazan universe is simply massive. Are there any special challenges or pleasures you’ve found in telling a story spanning hundreds of thousands of years?

I think the answer to this question relates back to what I said earlier about resonance. We were both archaeologists. Resonance doesn’t just exist between objects; it projects through time as well. The question of where do things come from—things like attitudes, belief systems, faiths, combined with the misshaping effects of vast spans of time on knowledge—these subjects naturally fascinate us. As archaeologists, we dug to find out, and then we let our imaginations loose. It is, in a sense, a profession of empathy. Well-suited to translate into fiction, I think.

The challenge (and pleasure) as always lies in electing what details to choose, which ones are relevant, and how much weight can they carry? As much as possible, one hopes.

Nomadic tribes seem to be a major focus in the Malazan universe. Honestly, early on I had trouble keeping them all straight! While nomads have shown up in other fantasy worlds, it’s rare for them to play as prominent a role as they have in your stories. What’s behind that prominence?

Most of human prehistory and a fair chunk of its history is characterized by the hunter-gatherer lifestyle, and later animal husbandry. It’s probably fair to say that we’d still be, one and all, hunter-gatherers, if we didn’t run out room and if we didn’t kill off most of the available game. It’s a common belief (blame neo-Marxist thinking on the hierarchy of cultural evolution) that the transition to farming was some kind of “advance,” with all the moral superiority implicit in that idea, and a product of enlightened choice. But if you look to where agriculture first emerged on this planet, you’ll quickly see (with a little digging) that these regions were ecologically fragile, and once the game was gone it was starve or improvise: and the one improvisation that worked was control: control of the game (domestication of animals) and then control of plant forage (domestication of wheat, etc). In that sense the only real difference between hunter-gathering and herding-farming, is one of control. In the former, one is mostly at the mercy of nature; for the latter, one ends up as the purveyor of nature. The notion of whether this was an “advance” is, I think, yet to be answered.

To answer your question: Why wouldn’t we fill our world with “nomads”? It’s a world where industrial progress has to a large extent been supplanted by magic; yet populations are still expanding, and entire cultures find themselves in the troubled hinterland of transition. Never a nice place: People will resist change even with a sword hanging over their heads. [Look at us: The climate’s heading into chaos but we still drive our cars, still package everything in plastic, still extract non-renewable resources at a prodigious rate, and on a day to day basis, our behavior has not changed one iota. So, we have an entire species with its collective head stuck in the tarsands.] My point is not this rant, however. Rather, it’s to say that cultures in transition are always intrinsically more interesting than stagnant ones. Look at every place of conflict globally and you’ll find cultures in transition. It’s all ugly, but it makes for great fiction (which, really, isn’t fiction at all, is it?).

Along the same lines, the relationships between “civilized” expansionist societies and “barbarian” indigenous societies figure in your stories many times. But you seem to work hard to keep from glorifying or romanticizing either side in their conflicts—for example, Hull Beddict seems at first to be a heroic figure for his willingness to fight his own people in order to defend the native tribes the Letherii exploit, but he turns out to be enabling another evil in Rhulad’s Tiste Edur. What drives this portrayal?

It’s far too easy to glorify the progressives when you are one, while romanticizing the sorry victims even as you trample all over them to get at their land and resources: People, to put it another way, who are struggling to cope or adapt to a new world order (said world order invariably imposed upon them through implicit or explicit violence—take your pick, both have and are happening even now). Although it’s probably a natural inclination for us to repeatedly (and maybe retrogressively) categorize our world, and world-view, all as an exercise in simplification, because most of us are, given the choice, intellectually lazy. If we weren’t, our heads would explode. But there are obvious risks in that simplification—it arrives like a final coat of paint hiding countless layers of significant detail. Worse, intellectual laziness is addictive, and has a hardening effect: namely, the fostering of prejudice and dogma.

While it’s scarier to advocate complexity, at least it’s a humbling exercise, and the person who lacks humility is incapable of compassion.

I saw in the conversation between you, ICE, and commenters on Tor.com that you’ve got a title for the first book of the Kharkanas series, The Forge of Darkness. Does that mean it’s your next project? Have you started writing it?

I’m about five chapters into it, yes.

Do you have any plans for writing outside the Malazan universe?

Sure, but apart from some early short fiction soon to be resurrected, and a couple non-fantasy novels already out there, it all comes down to time.

These last three questions are just ones I couldn’t resist asking when given the chance! Are you ever going to run out of Braven Tooth-style Malazan soldier names?

I’m sure there’s a finite limit to the number of Malazan recruits finding themselves under Braven’s tutorage and thus subject to his naming conventions but we have no intention of finding it.

Why do you keep killing Toc the Younger?

Toc the Younger and his fate is the more “humanized” corollary to Rhulad Sengar. What happens to a soul when it dies and is repeatedly resurrected?

Is there anything Karsa Orlong can’t kill?

Thanks go out to Mr. Erikson for his time and thoughts—be sure to check out his novels if you haven’t already.

Andrew Bayer is a long-time reader of fantasy and science fiction. He works in software and lives in San Francisco.