Five Ways to Cheat the Devil 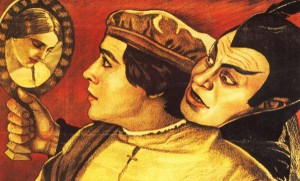 Say you have a bit of a devil problem. Maybe he’s shown up, uninvited, tempting you with your heart’s desire—the return of affection from one you adore, or riches, or fame, or instant weight-loss, or a get-out-of-jail-free card—and, even though you know better, even though his offer sounds too good to be true, it’s also too good to ignore. Or maybe he’s just there to torment you for the fun of it and you can’t seem to get him to go away. How does an otherwise upstanding soul like yourself keep, well, your soul, in a situation like that?

Depending on your circumstances, your options may not be as narrow as you first assume. Sure, the most obvious option is to take the standard contract, but as many of us have learned the hard way, the standard contract isn’t usually the best deal you can get. And if he’s just there being a dick, no contract involved, you’re probably feeling pretty hopeless. As I see it, you have about five ways to save yourself. Pick the one that fits your situation, and, above all, just try to keep your cool, ok?

Get a Woman to Save Your Ass

Now, I don’t mean to be sexist, but you have to understand that stories about the devil date back hundreds of years, and history is kind of a sexist place. So when I say you might consider enlisting a woman to help you with the devil because her cunning is almost as legendary as his, I’m speaking from a time when the only power women had was their ability to manipulate a bad situation as best they could to their advantage.

There’s a tale from Southern Appalachia about a man named Jack (okay, there are LOTS of tales from that part of the world about a man named Jack, and this is one of them) who got in a situation where every morning he woke up at the devil’s house and was given some impossible task to complete by nightfall, lest he be killed, his soul given over to the devil, and his head displayed on a stick (just to rub in the failure like they did back then, I guess). The first task was to empty a well to find a gold ring lost in it years ago. Jack was given the choice of two buckets—one regular bucket, and one with holes in. The devil’s youngest daughter had taken a shine to ol’ Jack, and she came to him the night before and told him that whatever he did, he should choose the holey bucket. But he didn’t, and every scoop of water just brought more water up until water poured out the top of the well. The youngest daughter admonishes him for not heeding her advice and switches buckets with him. The holey bucket, of course, does the job in three pulls and Jack is safe another night.

This continues, and the tale takes some convoluted twists, but at every turn the patient, quick, and cunning daughter outsmarts her dad and saves Jack, and the whole story ends with them married and living happily ever after, both of them safe from the devil at last, thanks to her cunning.

This option at first sounds like it’s only available to men. I do apologize for that, as, historically, it is mostly used by men. But let me implore the women reading this to not dismiss it out of hand. We women have to help one another out, and if your BFF has a pesky devil problem, you might hold the answer, especially if you happen to be the devil’s daughter. Really, if you’re the devil’s daughter and your girlfriend gets all tangled up with your dad, you should probably step in if you can.

Get Religious on Him

Thanks to the movie The Exorcist and its ilk, this one is probably the first you thought of yourself. Religious authority figures love to take on demons and have a pretty good track record, though not so good as to ruin the tales they tell. And, if you’re actually physically possessed by the devil, you’re probably busy with explosive bodily fluids and aren’t the one reading this. But to your friend who is reading on your behalf: the best traditional option here is exorcism. Good luck finding a priest who will take that on in this day and age, though!

History if full of various saints who have battled a myriad collection of devils, demons, evil spirits and the like, with various results. Poor Saint Teresa of Avila was infested with demons, and she tried everything from laughing at them to wielding the cross to applying holy water, and the latter seems to have worked best for her.

Saint Joseph of Copertino had his share of run-ins with demons as well, and seemed to almost enjoy his raucous nightly battles with them. On one memorable occasion, he called another saint, the deceased Saint Francis, from his tomb to help out. Saint Francis relit all the candles, and the light was way too bright for the devil’s eyes, and he vanished. So, if you’re religious enough, or are good at calling forth long-departed saints, this might be the best option for you.

Be (or Befriend) a Bad-Ass

The popularity of Buffy, the Vampire Slayer has shown us that demons (and even if you don’t think vampires qualify as demons, Buffy certainly took on her fair share of demons in the run of that show) are susceptible to a plain, old-fashioned beat-down. Preferably with axes, true, but still, if you can put some serious physical power behind your punches, the devil, when you deal with him, is often corporeal enough to feel the pain. This, of course, works better in those situations where the devil just seems to be messing with you for the fun of it; if you’ve struck a deal or there’s a contract with the devil, you’re going to wear yourself out this way and you probably want to try another route, such as…

Outsmart Him or Find a Loophole

There is an old Welsh tale about a bridge built by the devil over a deep gorge. The devil didn’t do it out of the kindness of his black heart, and was uncharacteristically up-front about the price of this bridge: The first living thing to cross it became his own. Everyone knew this, and everyone knew he wanted a man or a woman as his price, so they avoided this otherwise very useful bridge for quite some time. But one day an old woman was so tired coming home from the market that she didn’t want to take the long way around, and she figured out how to get across the bridge. She took her penny loaf of bread from her basket and threw it across, causing her poor little starving dog to run after it. The devil wasn’t very happy to receive a dog, but then, it’s sort of his fault for not being more specific. 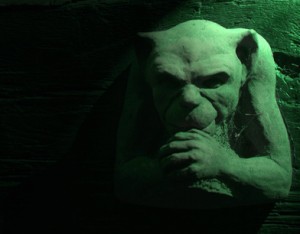 You’ve made your bargain and now your soul is condemned to hell … but what if that’s what you wanted all along? Maybe you’re a sadist, or a hardcore horror fan who can’t wait to experience torture by fire, meathooks, whips, knives, lava, manure, or what-have-you. Or maybe you just don’t think hell is going to be all that bad and you want to be where the action is (and all the best musicians, let’s be honest). This is probably the least obvious solution to your devil problem, and this suggestion comes from an appropriately unusual source: The Simpsons. During one of the Treehouse of Horror Halloween episodes, Homer trades the devil his soul for a raspberry donut. Homer finishes the last bite and is thrown down into the fiery abyss of hell, and ends up in the “Ironic Retribution” chamber, where he is force-fed donuts by a machine. Of course, the devil has underestimated Homer’s love of his favorite pastry, and Homer’s murmurs of pleasure as he gobbles up the never-ending supply of donuts give lie to how “horrible” this “punishment” really is for him.

The episode ends with Homer’s wife Marge showing up, proving that he’d given his soul away to her long ago and so had a pre-existing contract, rendering the devil’s claim null and void. So, my example for this last suggestion is also an example of my first one: Get a woman to save you. Or, rather, get your true love to save you. If your soul belongs to another, the devil can’t take it. Prevention really is the best medicine.

Heather Shaw is a writer, editor, gardener and aikidoka living in Berkeley, California with her husband and son. She’s had her work appear in Strange Horizons, Polyphony, The Year’s Best Fantasy, Escape Pod and other nice places. She just finished her first middle-grade novel, Keaton T., Junior Gene Hacker, and is looking for representation. For more, visit heathershaw.org.