I couldn’t tell you the first word I learned. “Cheese,” maybe. That delicious cream cheese my mother rolled in pea sprouts and fed to me on a plastic tray. Cheese was fucking delicious. To this day, I can’t shake my cheese habit—it’s the stuff of the gods, cheese is.

When we learn language as children, we often come to associate particular images with each word we learn. “What’s that?” we’ll say, pointing to the pale male figure in the blue uniform in a children’s picture book, and we’re told, “That’s a police officer.” Then someone will point to a pale female figure in white and say, “That’s a nurse.”

None of those professions is as great as cheese, but you get the idea.

The images we associate with these words are not only formative, but reinforced in much of the media we consume. “Police officer” conjures the image of that white man. “Nurse” delivers unto us that pale woman in the white hat, though really, outside a picture book or historical drama, who sees a nurse in that folded hat anymore? On occasion, yes, we’ll see representative examples that contradict these early images, but no matter how many times we encounter policewomen, or male nurses, many of us find ourselves conjuring the same old imagery we learned to associate with the words as children whenever someone brings them up.

And writer? When I think the word “writer,” my formative image is a pale man with a long white beard, like Walt Whitman, followed by Shakespeare, Thoreau, and maybe, if I’m lucky, Virginia Woolf, somewhere there in the unfolding kaleidoscope of images. My formative experience of the word “writer” was not me pointing to an image of Toni Morrison in a book and having my mom tell me “writer.” In truth, it would not be until grade school when I learned of writers who were something other than the pale like me. Oh, sure, logically, you hear that “anyone” can be a writer, or “anyone” can be a nurse, but just like “cheese” initially elicited images of those cream cheese blobs slathered in pea sprouts to me—no matter how many goudas or manchegos I ate—so “writer” has always been, first and foremost, some old Walt Whitman-looking dude.

This is what I mean when I tell people that our view of the world, and reality, is a constructed one. Our brains—in their unending quest to be more efficient—often pull on early images and memories to construct our view of the real world. After all, what other information do we have to achieve this but those early stories about how the world is, how it works? When one is building an entire world from scratch—which is literally what our brains are doing in our early years—our first exposure to media is going to be the foundational media. Everything we encounter after that will be used to readjust that first framework for our world.

So when someone told me what epic fantasy was, sometime in my early years, and they pointed to Tolkien and his medieval castles and orcs and wizards . . . well. That was epic fantasy, defined. Anything else that came after that—any other type of author, in any type of other setting, either needed to be put outside that frame or somehow be mangled to fit within it.

Epic fantasy was defined. It made it harder to make other things fit into it.

What I soon realized is that it wasn’t just me who struggled with that frame.

When I see the bestsellers in epic fantasy today, I can’t help but see the same genre-framing contortions I did as a child played out on the shelves. I see what folks line up next to Tolkien, and Terry Brooks, and George R.R. Martin—them and their imitators and the not-so-imitation-but-what-publishers-would-like-to-market-as-such in nice neat rows, and there is a startling sameness to these writers and their milieus that is heartbreaking. Every epic is grand, the first time: the first Dragonlance novel, the first Joe Abercrombie book, but after those come the waves of imitators, the ones pushed on the reading public by publishers frantically scrambling to find more of the same—but just a little bit different, like, instead of a stable boy who’s really a prince, can we have a courier boy who’s really a prince?—before we weary of the latest iteration.

I see an entire “genre of the epic fantastic” that’s been defined in the most narrow way imaginable. I want to see the weird cities of K.J. Bishop and Steph Swainston up there next to the dudes with the swords and fiefdoms on the bestseller lists. These days, Adrian Tchaikovsky has pushed into the fray with an uncommon setting, as well as David Anthony Durham, and Brian McClellan replaces feudal swords with flintlocks . . .

But what’s missing here, in my list of names? What am I writing out?

Where have all the women in epic fantasy gone?

Or, when we say “epic fantasy,” does that just prompt us, immediately, to forget about everything outside the frame, to remember only, at best, the pseudonyms—the Hobbs or the K.J. Parkers?

Kate Elliott, who has been writing epic fantasy for decades, has had recent work reviewed as solidly YA, and if one were to ask, today, what Elliott writes, many reviewers would answer “YA” or the more generic “fantasy.” Author Delilah Dawson has related on Twitter that her original Blud series was, to her mind, a fantasy novel, but she was encouraged to play up the romantic elements and pitch it as a romance. Ann Aguirre writes books across a bunch of genres, but ask folks what she writes and you’re likely to hear “YA” or “romance,” not “science fiction” or even “fantasy.” Women are often told, time after time, that they have a better shot of making it as novelist if they position themselves as romance writers than epic fantasy writers. Even when writers like N.K. Jemisin and Jaqueline Carey are positioned as epic fantasy, I still encounter readers who make faces and say, “Oh, that’s not fantasy, really. Too much romance.” Yet all the sex in the dude books? Totally fantasy!

It’s hard for us to change our frame.

Romance and YA are not, for marketing reasons, bad places to be, but why do readers and reviewers continually place epic work by women, in particular, into another category, all but ensuring what we view as “epic fantasy” today becomes a clutter of male writers and women writing under male or gender-neutral pseudonyms like Mazarkis Williams, Robin Hobb, and (likely) K.J. Parker?

I’d argue this has little to do with content, as the three pseudonymous authors above write in a cozily epic and somewhat dark tradition reminiscent of the rest. Instead, it has to do with how we’re taught to view and categorize artistic work.

Epic fantasy seems to have drifted into a prescriptive mode characterized by gritty descriptions, multiple POVs, abuse and maiming, medieval milieus, and, oddest of all (!), work that does this as written by male authors. Karen Miller and Anne Bishop need not apply (Anne Bishop’s pain-dealing cock rings, one imagines, may be too much for many grimdark epic fantasy readers to stomach).

When one holds up as examples of a type of fiction only work written by men, and only dark, pseudo-medieval work by men, it’s an effective way of shutting out all other types of work. The strange thing is to watch people try and keep out what they don’t believe fits into the frame. I’ve had people push my own work out of the “grimdark” mode of fantasy for having spaceships, and Karen Miller for not being “epic” enough, and Anne Bishop, naturally, for skirting that “romance” line too closely (too many cock rings!).

Once one has constructed a frame, one has to work very hard to maintain its borders, even when those borders can clearly be far broader. This was the frame they were shown. This is what fits. Everything else must be put in different boxes.

What we fail to understand when we critique the reading habits and choices and shoring up of the frames that people have made when called out about this—this lack of memory and categorization of women authors, this constant pushing out—is that though these are things done by individuals, the actions themselves are part of a broader system of dismissal and un-seeing that we’ve been internalizing—all of us—from the time we were children. We grew up in a system that wanted us to see and remember and prioritize particular voices and worldviews, and we perpetuate them whether we’re aware of them or not.

If we’re told that the only cheese is blue cheese, it’s the first cheese we’ll think of, and the cheese by which all others are measured. For those who don’t care much for blue cheese, it may even lead one to think that all cheese is horrible, because they don’t have an inclusive frame that can hold all the rest.

One of the greatest lies we’ve ever been told in the United States is that we are free and independent individuals. Most people will tell you marketing messages don’t work on them, and they aren’t sexist or racist at all—everyone is equal, everyone is the same. But the frame we’ve built for the world is not built on those ideas. The frame tells you these people do things, and these people have things done to them. These are assumptions and preconceptions built into our very language. It’s no wonder it becomes an epic undertaking to try and dismantle them.

When I tell other writers these sorts of stories, about the inherent resistance of readers to including them in genres they actively want to write in, I get a lot of sour, grim faces. For good reason. Who the fuck wants to deal with all that? Who wants to fight all that? How can we kick down and help somebody re-build a frame of reference that’s reinforced from every media message?

The answer is: We have to be part of rebuilding the landscape. The truth is we must be part of building new stories. But first we must pull down our own preconceptions of what we can and should and ought to write. We need to tear down the internalized despair over the long slog we’ve got ahead, and get to work.

I’m not saying that’s easy. In truth, it’s really, really hard. But the more I work at it, the more I’ve reimagined cheese not as some pale lumps covered in pea sprouts but a full-on Spanish cheese sampler, and you know? My life is richer for it. I’m branching out. There’s hope.

Will any of this change the world? Will a single act change the narrative, and reimagine our language? No. But I can tell you that every great act starts with someone saying, “This isn’t okay. This isn’t truth.” Where the real shift comes is when a small, passionate group of people sees it too, and takes on the task of reimagining the world with you.

Are you with me? 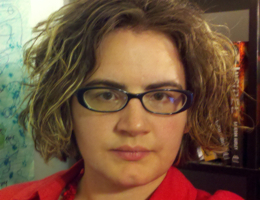 Kameron Hurley is the author of the subversive epic fantasy novel The Mirror Empire and the science-fantasy noir God’s War trilogy. Her work earned her the Sydney J. Bounds Award for Best Newcomer and Kitschy Award for Best Debut Novel. Hurley has been a finalist for the Arthur C. Clarke Award, Hugo Award, Nebula Award, Locus Award, and BFS Award for non-fiction.  She pens a bi-monthly column with Locus Magazine on writing-related topics and blogs regularly at kameronhurley.com.