The story has been told often enough by now that each us thinks we know where it came from. A man (it’s almost always a man) becomes a powerful magician (or later, a scientist) and creates something that looks almost human. Then it all goes wrong. Contemporary readers think immediately of Frankenstein, or perhaps even The Magician’s Nephew—but the story of human-created life and the dangers associated with it goes all the way back to the roots of Western civilization. The Talmud and commentaries are littered with references to what later came to be called golems. Medieval and Renaissance alchemists sought to create homunculi. After the intellectual upheavals of the Scientific Revolution and the Enlightenment, those figures transformed into Mary Shelley’s monster, who redefined the human-created humanoid for the modern world.

The Word Made Flesh 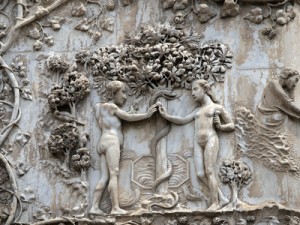 The first Western creation story is Genesis, where Adam is formed from dust. Talmudic texts contain several other references to similar creations, and it is in these texts that the word golem—originally meaning “unshaped form” or “something in an embryonic state”—comes to have its meaning of a clumsy humanoid. Medieval Europe, besotted with alchemical ideas descended from corrupt versions of classical works, also had its share of golem stories. Golems were creatures generally made from mud or clay, and given life. That gift was rarely free. Most mythical golems were enslaved to their creators. They were bound to the written word. A golem had to obey any instructions written down and slipped into its mouth.

Golems were also created by words. It was alleged that studying the Sefer Yeztirah or other mystical works would grant the power to create golems. The most famous golem story comes from late sixteenth century Prague. The local Jews, fearful of what was going to happen to them under the Holy Roman Emperor Rudolf II, talk Rabbi Judah Loew into creating a monster. The variations of this story are numerous. Some say the Golem falls in love but is rejected and becomes a monster. Some say that it was a monster all along. All agree on one thing: the golem eventually gets out of control and has to be destroyed … or at least deactivated, since there are still people who will tell you it rests in the attic of the Altneuschul, which is of course not open to the public.

Homonculi are also often made of clay, but they tend to be smaller and more peaceful than golems. Tiny little men, they are usually made to do housework. The sixteenth-century occultist Paracelsus usually is widely credited with coining the word. His little servant apparently got fed up with the alchemist, though, and ran off into history soon after his creation. After Paracelsus, alchemical literature abounds with various creations employing the humanoid mandrake root. As preformationist doctrines spread through European intellectual circles, it became common to create homunculi by, for example, replacing part of an egg white with human sperm and then burying and digging up the egg at specified times. The resultant creature, according to one David Christianus in the eighteenth century, would subsist on earthworms and lavender seeds.

In the Islamic alchemical traditions, the effort to create life was known as Takwin. It is best attested in the work of Jabir ibn Hayyan (c. 721-c. 815), who, like his European descendants, at times seems interested as much in confusing the uninitiated as in pursuing the grander goals of alchemical transformation. Jabir is credited with some 3000 written works. If he was in fact real, he was one of the world’s great medieval alchemists, and one of his life’s pursuits was Takwin. If he ever succeeded the results are not recorded. (Or perhaps they are and his commentators have never figured it out—the word gibberish, after all, is said to have been coined by frustrated readers of Jabir’s impenetrable codes.)

The most famous human-created man, of course, is Frankenstein’s monster. Over the course of a long weekend in 1816, a rebellious eighteen year-old on a Continental jaunt with her poet lover crushed together Prometheus, the Golem, and the Scientific Revolution and came up with a man-created man for the new world of steam power and galvanism. Mary Shelley’s artificial man is not seamlessly created of raw material, as in mystical and pseudoscientific traditions, but cobbled from parts of previously existing humans (the way scientific advances are often cobbled together from the work of predecessors). He is a patchwork, a jury-rigged workshop contraption that against all odds comes to life. It is hard not to read some skepticism about the supposed nobility of science in this most influential science fiction novel. The visionary creator, Victor Frankenstein, utterly fails to understand or provide for his eloquent and sensitive creature, driving it to despair and violence.

Legends of man-made men are as confused as the creatures themselves. General consensus holds that the stories of the Golem of Prague first appear in the eighteenth century, and was an inspiration to Mary Shelley. A significant minority, however, argues that it is not in fact one of Mary Shelley’s inspirations but rather was perhaps inspired by her. Recent literary scholarship argues that the Golem of Prague might in fact have been created in 1837. Perhaps the people of Prague were not re-telling ancient stories, but were simply science fiction fans. There is no way to know for sure.

Golem stories are as old as Genesis and the flood of retellings shows no sign of slowing down. The Golem becomes the homunculus becomes Frankenstein’s monster becomes the clone. Always the creatures spring up. Every story draws inspiration from another story. Most disturbingly, one of the more mysterious residents of the real Castle Frankenstein was Konrad Dippel. He was a student of David Christianus—the man who believed that lavender and earthworms were the thing to feed a homunculus. There’s no word on whether the grounds of the castle were covered with lavender.

Alex Irvine’s most recent novels are Buyout, The Seal of Karga Kul, and Transformers: Exodus. He also writes comics (Iron Man: Rapture, Daredevil Noir, Dark Sun: Ianto’s Tomb). Currently, in addition to three different novels, he is working on a Sekrit Project just like everyone else, only his is cooler. He lives in Maine and can be found in all the usual places online (@alexirvine on Twitter, alexirvine.blogspot.com).