In this week’s Author Spotlight, we ask author Michael Swanwick to tell us a bit about his story for Fantasy, “The Edge of the World.” 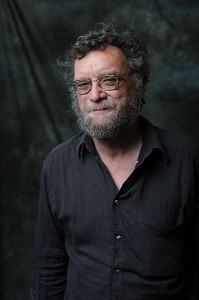 “The Edge of the World” mixes the realistic and the fantastic. You have created a world that is both familiar and strange. While in our own world we have Coke, conflicts in the Middle East, troubled teenagers, and a Tranquility Base on our moon, we do not have an edge to our world, nor do we have “dragons and magic and all kinds of weird monsters.” How did you decide where to make the realistic end and let the fantastic begin?

The problem Donna, Russ, and Piggy have is that they live in a world which is, so far as they can tell, entirely devoid of magic. Also, they’re adolescents, which amounts to the same thing. I discovered fantasy when I was in high school and it represented everything I couldn’t have … adventure, romance, freedom, a world that wasn’t inherently painful. Like my characters, I could imagine something better, but not how to get from here to there.

All the ugly stuff comes from real life and is painfully real, painfully close. Everything beautiful is either fantasy or inaccessible—in the sky, in the past, locked away in a boy Donna can’t find a way to communicate with.

What the reader can see, though they cannot, is that their world is inherently beautiful and that if they can only survive into adulthood, there’s the possibility of happiness.

Many of our readers are fascinated by the process of world-building in fantasy narratives. What can you tell your readers about the creation of this world?

I live in Roxborough, a blue-collar neighborhood in Philadelphia which lies just above the fall line separating the Piedmont and Tidewater geological regions. Manayunk, below, used to be a mill town. In between is a cliff, and many of the streets abruptly end in a metal stairway down the cliff-face, and resume at the bottom. When I came up with the story idea, I spent a day walking up and down the many sets of stairs, taking notes about what I saw, the best of which went right into the story. From the stairs, you can look over the rooftops and church spires of Manayunk and catch glimpses of the Schuylkill River and the hills beyond. I remember there was a full moon afloat in the bright blue sky, looking like a disk of pale ice. It was a wonderful experience, like taking a vacation inside a children’s book.

The references to Toldenarban history were all derived from various works of classic fantasy. The Mezentian Dynasty comes from E.R. Eddison’s Zimiamvia Trilogy, Ackronnion and Althazar are from Lord Dunsany, and so on. The non-fantastical multicultural richness was done in imitation of Jan Morris’s nonfiction book about an imaginary city, Last Letters from Hav. So my pleasure reading came in useful here.

I put all these things together, and day-dreamed about them until I found a story and was ready to start writing. All told, it was the easiest world-building I ever did.

What do you remember about the creation of this story? Did it start off with an image? An idea? A character?

It started with the image of the Edge of the World as a real place. Surprisingly little has been done with the locale—a story or two by Larry Niven and Philip Jose Farmer’s “Sail On! Sail On!” are the only examples I can think of. Even Lord Dunsany’s tales collected in At the Edge of the World are actually set on the edge of our world, which is to say in the imagination, rather than the world’s literal edge. My contribution was to place this setting in what is recognizably our world.

For the sake of any young writers who might be reading this, I should mention that there’s still a lot that could be done with the Edge of the World. It’s a powerful image, it can be set in any age or culture, and it’s in the public domain.

During the course of this story, the protagonists take a leap down the steps while climbing down this cliff on the edge of the world. Donna takes this leap being fully aware there is possibly no way back up. Why would she take this leap?

She takes it for love and for friendship, and she does it to prove her courage. Teenagers have lots of courage, and they use it for lots of reasons, not all of them wise. A high school friend once told me that her suicide attempt was the bravest thing she’d ever done in her life. I thought about that statement a lot when I was writing this story.

What do you remember about this story’s initial path to publication?

It sounds immodest, but after my first sale, I’ve never had much trouble placing a story. I’d been asked for a contribution to Full Spectrum 2, I sent it in, and they bought it pretty much immediately.

“The Edge of the World” won the Theodore Sturgeon Award in 1989. What was that experience like? What does that award mean to you today?

The Sturgeon was the first major award I ever won. At the time I’d been published for nine years and had many stories that placed on the Hugo and Nebula ballots but I had never taken home a trophy. So it was a very big deal to me. They flew me in to the University of Kansas for the ceremony. Pat Cadigan picked me up at the airport and en route to the campus said that if the sky turned green I was to yell a warning so we could pull over and dive into a ditch until the tornado passed. I was given a room in an otherwise empty dormitory, and the next day took part in various academic symposia. So it was a very strange experience.

But a positive one. I met Fred Pohl, who was kind to me, and that was a pretty big thrill in and of itself. I watched him carefully to see how a major writer comported himself, and saw that he was constantly, in ways large and small, trying to help other people, trying to make the world around him a better place.

To what degree I can, I try to live up to his example.

I’m still pleased to have the award, but when you sit down to write, the blank screen is not one bit intimidated by such things. You just have to roll up your sleeves and get to work.

What does “The Edge of the World” mean to you today?

On a personal level, it’s a very meaningful story for me. My senior year of high school, so many terrible things were happening to me and my friends and the world! I swore that I would remember exactly what that time was like and that when I could write I would bear testimony.

When all the intents and influences are spelled out, they make the story sound terribly nihilistic. But that’s exactly the opposite of how it’s meant. I thought when I wrote it that young people going through exactly that kind of difficult period would, on encountering “The Edge of the World,” see that they were not alone, that somebody else had been there before them. Also that they’d realize that, somehow, I’d lived through it and that therefore it could be done.

That’s the intent, anyway. You write your stories and send them out into the world like galleons and you never learn what ports they reach.

Here’s a big question for you: Why fantasy? Ultimately, when stripped down to its basic elements, “The Edge of the World” is about a trio of teenagers finding their places and identities within the world. It is about their relationships with one another and explores how those relationships might be altered if their trio is arranged differently or even reduced to a duo. Why use a fantastic setting to relate these themes and explore relationships in this manner?

Because I was writing about such terrible things—about teen suicide and the mess it leaves behind, about the assassination of Martin Luther King (one of those bad things which happened in my senior year), and about the death of dreams—that a straight retelling of it would have been unbearable to read. Fantasy lent these matters distance and (in the fantastic sense) glamour. Also an inherent beauty which argues against the squalor of Donna’s life.

Fantasy is simply seeing the world as it isn’t. When your life is in a bad place, that can be your salvation. It was for me, anyway.

So, what’s next for Michael Swanwick?

I’ve just published Dancing With Bears, a scandalously enjoyable adventure in which my Postutopian confidence swindlers Darger and Surplus travel to Moscow to make a big score and discover that Russia is stranger and more dangerous than they ever imagined. If enough people like it and buy it, I’ll go on to chronicle their adventures in China and beyond. I also have a third, independent, and final volume in the world of The Iron Dragon’s Daughter and The Dragons of Babel that I should be starting soon. Plus a half-dozen short stories I’m working on at this very moment.

Beyond that, I already have enough ideas to keep me busy for decades, with new ones popping up every day. I could live forever without running out of stories to write.